Parents shut down school in Pietermaritzburg

Department of Education has not yet fixed classrooms damaged by storm 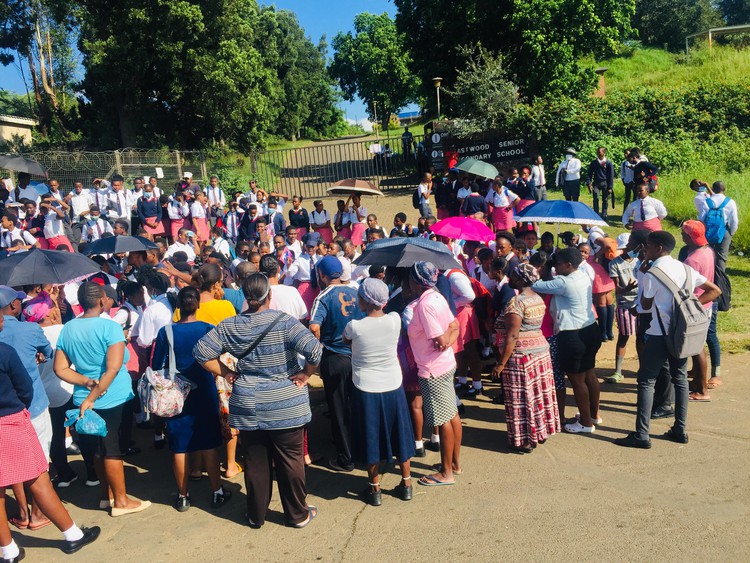 Parents of learners at Eastwood Senior Secondary School in Pietermaritzburg have shut down the school demanding that the Department of Education keep a promise to fix damage done by the storm in December. Photo: Nompendulo Ngubane

Parents of learners at Eastwood Senior Secondary School in Pietermaritzburg shut down the school on Tuesday and Wednesday demanding that the KwaZulu-Natal Department of Education fix roofs and classrooms damaged by a storm in December 2021.

Learners and teachers were blocked from entering the school and they returned home. The gates were locked.

Parents said the school would remain closed until KZN Education MEC Kwazi Mshengu implemented a plan to rebuild the broken roof, classrooms and the other school infrastructure that was broken.

School Governing Body (SGB) Chairperson Basie Prinsloo said in January that Mshengu had visited the school to see the damage and promised that repairs would be prioritised but nothing had happened. He said most of the classrooms had no roofs. “Learners cannot continue with classes under appalling conditions,” said Prinsloo.

Parent Mzwandile Goge said parents had “been ignored” by the department. “This is an emergency that needs to be attended to” said Goge.

Grade 12 learner Sanelisiwe Gwala said books as well as infrastructure had been destroyed in the storm and learners were missing classes. “All the grades in KZN have started to attend school on a full time basis but ours are not … The government must rebuild our classrooms,” said Gwala.

KZN Education spokesperson Muzi Mahlambi said it was not acceptable for parents to shut down the school. He confirmed that Mshengu had visited Eastwood Senior Secondary and said the MEC had promised mobile classrooms. The department had ordered 288 mobile classrooms to provide to schools damaged by the storm and 170 had been sent to schools.

“The factories that manufacture them are out of stock and that is causing a delay,” said Mahlambi.

Next:  No work, no pay: Clover workers feeling the pinch as strike enters fourth month

Previous:  Netcare sexual assault centres: are they as publicised?