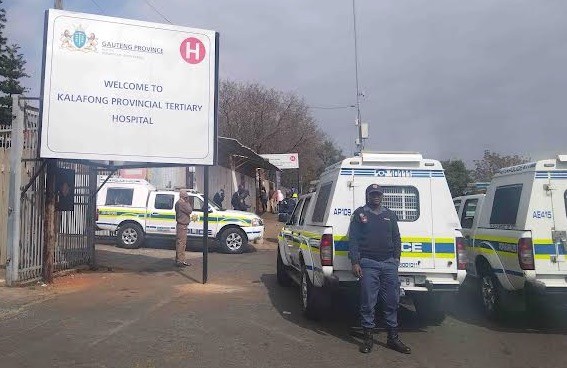 Police were present at Kalafong Hospital in Tshwane on Wednesday after the Gauteng Health Department obtained an interdict to prevent members of Operation Dudula from threatening immigrants. Photo: Mosima Rafapa

Members of Operation Dudula were outside Kalafong provincial hospital in Tshwane on Wednesday, shouting at immigrant patients and employees. Police were present, enforcing the court interdict obtained last week by the Gauteng Health Department against the threats.

A security guard who did not want to give his name said for most of August Operation Dudula members had been operating outside the hospital, until the Gauteng Department of Health obtained a court interdict last Friday.

“They greeted patients who were of a dark skin colour one by one, to check which language they spoke and to listen to their accent. The local language here is Tswana or Pedi. If they found that you don’t know those languages, they turned you away,” said the security officer, whose station is not far from the pedestrian entrance.

Since 4 August, Operation Dudula has been trying to deny access to patients and employees from other countries.

“I’m here at 5:30 in the morning. Just before 8am this morning, a member of Operation Dudula was speaking through a loudspeaker saying they don’t want makwerekwere. On Monday, they checked their ID documents before people could enter the hospital. Today, they were about five or six of them outside. I think they wanted to scare people away because they just stood there until the police arrived,” he added.

Last Friday, the Gauteng MEC for Health obtained a court interdict against the members from threatening or denying access to patients and employees. The interdict was pinned to the notice board outside the hospital.

When GroundUp arrived just after 10am, a handful of Operation Dudula members were still gathered outside. Some were shouting that foreigners should leave.

Chairperson of Operation Dudula in Atteridgeville and regional coordinator in Greater Tshwane Elias Makgwadi said they were picketing outside the hospital entrance to get management to enforce the hospital’s admission rules and not admit “illegal foreign nationals”.

“We are saying, enforce your own rules. If illegal foreign nationals have been admitted to hospitals they must be discharged to law enforcement officers and immigration officers. That’s why we’re here, ” said Makgwadi.

Members of the Economic Freedom Fighters (EFF) put up a tent outside the hospital entrance and started chanting songs. Provincial spokesperson Phillip Makwala told the crowd: “Operation Dudula is acting as doctors, they are interfering with the process of the South African Police Service and the immigration office.”

Police officers were stationed outside the hospital.

Verrah Frace, from Zomba in Malawi, condemned the xenophobia. She works as a domestic worker in Laudium, west of Pretoria. Frace, who had come to visit her sick sister, said it was painful to see what Operation Dudula was doing.

“I came to South Africa in 2019 to look for a job because we are very poor back in Malawi. We are in South Africa to earn a living,” said Frace.

GroundUp heard a hospital employee wearing a pharmacy tag praising the Operation Dudula members. “These people get our medicine for free. They get everything for free. You guys are helping us. You are doing a great job,” said the employee before going back inside the hospital.

James Chasiya, from Magochi in Malawi, was at the hospital to see his wife who had given birth to a premature baby. He arrived in South Africa in 2014 and works as a plumber, living in one room in Laudium with his wife.

“Sometimes the piece jobs are hard to come by so I sell some of the furniture I have in order to pay rent. It’s not as easy living here as people think. We struggle. My wife works at a creche but it’s still hard. I’m undocumented so I can’t find a real job. There’s no way I can pay for a private hospital,” said Chasiya.

Head of Communication for the Gauteng Department of Health Motalatale Modiba had not responded to GroundUp’s questions by the time of publication.

The health department’s Motalatale Modiba said that the facility reported that operations are continuing as normal with no change in the number of patients.

“There is now increased police monitoring the situation. Patients are no longer obstructed from coming into the facility. The Department would like to assure patients that the hospital continues to render services to all who need such care,” he said.

Modiba said the department will not hesitate “to call law enforcement agencies to act against those that put the lives of patients and staff at risk”. He said the Department obtained a court interdict on 26 August from the High Court in Pretoria “to prevent a group of people from threatening, preventing and denying patients (deemed to be non-South African) and employees at Kalafong Hospital from accessing the facility to receive medical attention and to administer care respectively”.

This article was update to include a comment from the provincial health department spokesman.

Next:  Ethics committee urged to act against MPs over PRASA collapse