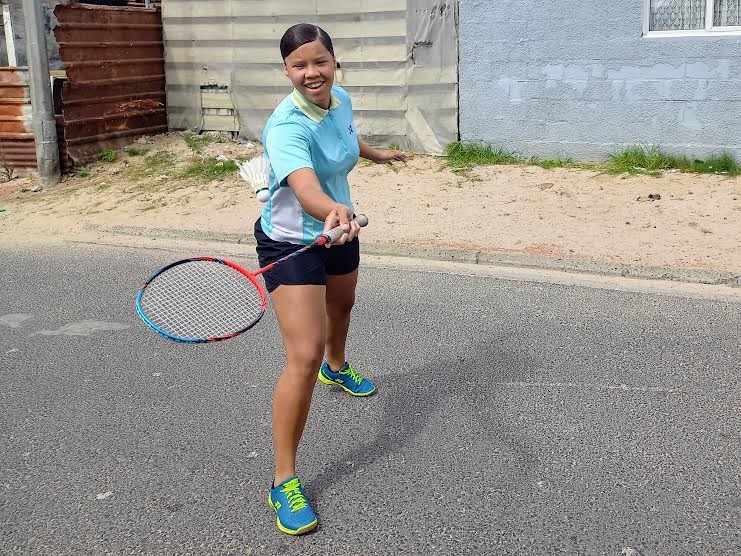 Micheala Ohlson wants to be an inspiration to younger badminton players. “I want to motivate them and let them know that in life you don’t just get things overnight. You need to work hard and make sacrifices.” Photo: Marecia Damons

Teenager Micheala Ohlson, from Ocean View, has been selected to play for South Africa at the All Africa Under-19 tournament in Mauritius next month

“When I saw her play, it inspired me. I thought to myself: ‘This is what I want to do.’”

She said she would also see her neighbour Francois Wessels carrying rackets and shuttles and would ask to borrow these to hit around in the street. Wessels is now her coach.

“The moment I took a racket and held it in my hands, I could feel the excitement of the sport,” said Ohlson.

Ohlson said although she also played cricket, “I didn’t feel the game like badminton.”

Wessels started taking her to the hall in Ocean View and later to the John Tyres hall in Kenilworth, where the Ocean View team also practises.

“There would be players who already had their SA colours. I would sit and watch how they played their hearts out, diving for the shuttle and shouting for joy when they won.”

“The other players went to other provinces and countries, and I thought to myself: ‘I also want to go there.’ So I trained hard and eventually reached their level,” said Ohlson.

She said she goes to gym every day and practices badminton in Kenilworth every Saturday for three hours.

Ohlson is the oldest of five children and has been living with her aunt Tougieda Stemmet in Lavender Hill since her mother died in 2019. Her father died in 2014.

She said she initially battled to strike a balance between school and practising but said her aunt helped her set up a system to set aside enough time for both.

She also sometimes coaches younger players at the badminton courts in Kenilworth. All her siblings play badminton and her younger sister, Michelle Adendorff, received provincial colours for U-17 badminton. “My aunt always pushes us to do better in life and reminds us that there is a better life out there if we work hard.” 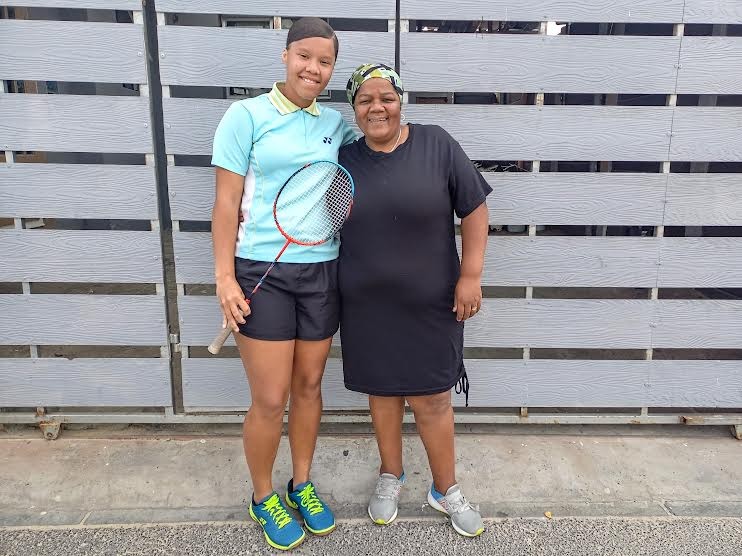 Micheala Ohlson’s aunt Tougieda Stemmet says the family is very proud of her achievement. “Badminton was something new for me and I’ve learnt a lot through Micheala. We are all very excited for her.”

Stemmet, who worked as a caterer at the University of Cape Town for 17 years until three months ago, says she was initially concerned that it would be hard to raise the money to send Ohlson to Mauritius. “But I believe the money will come in and Micheala will go. She must just believe in herself.”

The teenager still needs R30,000 to cover travel and accommodation costs. Her uniform and badminton gear are provided by a sponsor. The Defence Badminton Club in Kenilworth will be hosting a tournament on Saturday 26 November to help raise funds for Ohlson’s trip to Mauritius.

Stemmet said as a family, they try to attend every game Ohlson plays. When they are unable to attend tournaments in a different province, they watch Micheala play on Facebook live.

Wessels said Ohlson was enthusiastic from an early age.

“She would always come to me and say ‘It’s practice time we have to go now’ and she would pick up the equipment and wait for me to be ready,” said Wessels.

He said children often borrowed rackets and shuttles from him and played badminton in the road when it was not too windy. He said if he saw they had an interest he took them to the courts.

The Ocean View Badminton club was started in 2000, in an effort to get children off the streets and playing a sport. The club grew and he developed as a coach. “Many kids from the club started getting their Western Province colours”.

Ohlson is the fourth player from Ocean View to receive her South African colours for badminton, said Wessels. The first was Robert Abrahams in 2006.

Another of Ohlson’s coaches, Mike Noone, said her selection for South Africa is the culmination of the hard work she has put in”.

Next:  Some Eastern Cape learners walk 20km to and from school. Every day.