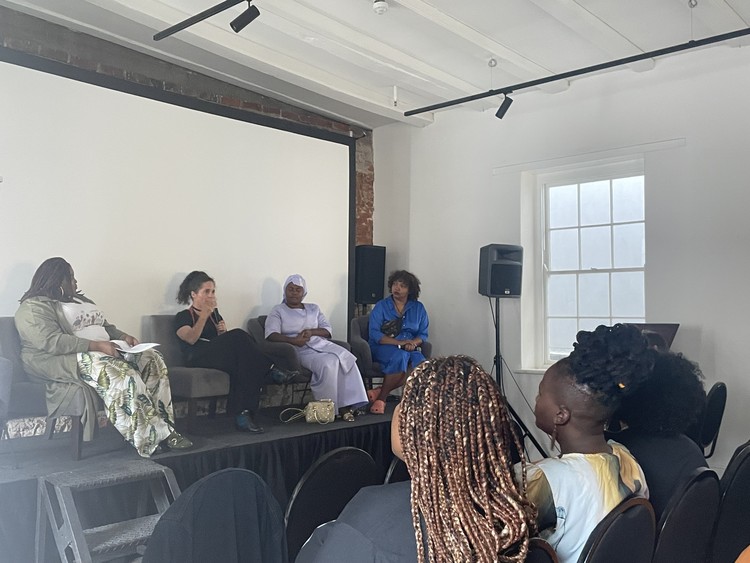 On Thursday, Embrace launched a five-part documentary series called Push Comes to Shove which tells the stories of women from across the country who experienced obstetric violence. From left to right: Nonkululeko Mbuli, Sydelle Willow Smith, Noloyiso Williams and Shana Fife. Photo: Supplied

Imagine being a scared 15-year-old having painful contractions in the reception area of a hospital because staff refuse to admit you. Well, this was the case for Noloyiso Williams from Redhill in Cape Town who says the memory of this experience is still traumatising almost ten years later.

Williams’s experience is shockingly not an isolated incident.

According to gender justice expert, researcher and activist Dr Jess Rucell, the World Health Organisation in 2014 confirmed that women across the world, but especially in lower-income countries, who give birth in hospitals commonly experience obstetric violence.

“Since 1998, research on obstetric violence has been documented in the Western Cape, Eastern Cape and Gauteng, in cities and rural areas.

“More recently women’s testimonies as well as research has highlighted the abuse of pregnant women by health services. It has been reported in KwaZulu-Natal, Limpopo, Mpumalanga, and the Free State. Research into forced and coerced sterilisation of HIV-positive women … has shown that this has been a geographically widespread practice that continues,” said Rucell.

See also this article by Bhekisisa and research report that shows how teenagers and women from low-income communities are especially vulnerable to abuse during childbirth.

Embrace is a social movement for mothers who experienced abuse when accessing reproductive healthcare. These violations can be physical, verbal and psychological, and include medically unnecessary and coerced interventions. This neglected form of gender-based violence happens during pregnancy, childbirth and in the postpartum period.

On Thursday the organisation hosted an event to raise awareness about this lesser-known form of gender-based violence as the national 16 Days of Activism comes to an end this week. The campaign was started in response to the organisation being inundated with stories from people across the country.

Speaking to GroundUp, Williams recounted the day she went into labour with her now ten-year-old son. She explained that she had been registered at False Bay Hospital where she had her antenatal checkups. But as it got closer to her due date, her mother insisted she move in with her at Samora Machel. “Soon after I went into labour. False Bay Hospital was too far, so we went to [a closer well-known Cape Town public hospital],” said Williams.

“We went to the emergency waiting area and I was in unbearable pain. All I was doing was crying. All I could hear was one of the nurses questioning my mother about why they had brought me to that hospital and not False Bay Hospital. It ended up being an argument between them.”

“Only after my father intervened, begging them to at least let me give birth and then transfer me to False Bay, did I finally get a bed. By this time blood was running down my legs,” said Williams.

She was rushed in for an emergency C-Section operation because the baby was in distress. “The healing process for me was hell and I ended up suffering from postpartum depression,” said Williams.

Another mother who spoke out about her experience was Shana Fife from Mitchells Plain. She said that the day after her C-section, some of the women in her ward were asked to move to the lounge area to make more bed space for new mothers.

“We were told to wait for the ambulance and that we would be transferred to hospitals near to the areas we live in,” said Fife. Fife said the lounge area was in bad condition.

She waited there in the cold, without any pain medication for 18 hours. “The windows and chairs were broken. I sat and I waited. No one came to feed me or give me medication. I kept going to the nurses telling them I was in pain and asking for pain medication, telling them that the paediatrician had not come to check the baby and that it was cold. It was around May so winter was starting.”

Fife said that by the time a relative was able to come pick her and the baby up, she could barely move. “I was in a lot of pain because of the C-section. I could barely stand up. I was previously a psych patient with a history of prenatal depression, so I was anxious the whole time,” said Fife.

On Thursday, Embrace also launched a five-part documentary series, Push Comes to Shove, which reveals how trauma is inflicted on mothers when they are pregnant, during labour or newly postpartum in both public and private healthcare sectors.

The launch was held at the Desmond and Leah Tutu Legacy Foundation, and was attended by health activists, women who have experienced obstetric violence and representatives from different hospitals and organisations.

“Our organisation has worked hard to elevate the stories of women who have experienced obstetric violence. The logical next step was to co-create these short films with visual story-telling agency Makhulu and mothers who have been wanting to share their stories,” said Embrace’s Julie Mentor.

Embrace’s Nonkululeko Mbuli said they plan to work with organisations and individuals that work with birthing people. “We’ll provide resources including the films, discussion guides and other resources to debrief.”

Moms get abused at private hospitals too

In March 2016 I went to a private hospital in Cape Town because my unborn baby was in distress. I suffered the most horrible abuse by nurses and luckily I was with a friend who saw the whole thing and spoke to my delivery doctor about the abuse from the nurses. When I finally gave birth via c-section, the nurses were brutal to the point my stitches came out. I wrote to the hospital about my treatment and was called in where the head of nurses apologised but the scar is still there today.

I also had very bad service at a state hospital in North-West. I feared for my and my baby's life. l actually gave birth without any support and with no one in sight. After my baby was out, they screamed at me and mistreated my baby by yelling at him as well after throwing him down on the scale as well as on the bed. They forced me to walk naked to a toilet! I also saw another patient go through the same... I can't get it out of my head. I had very bad depression afterwards for a long time. Again I'm pregnant. All of what happened just returned in an instant.