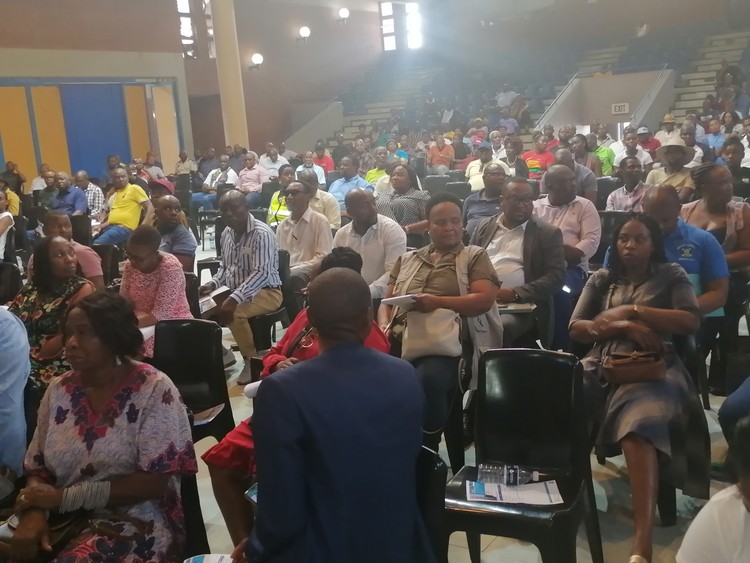 Residents from over 50 villages across Giyani in Limpopo gathered at the community hall where they were addressed by Water and Sanitation Minister Senzo Mchunu. Photo: Bernard Chiguvare

“We no longer trust government officials who come to address us about water,” says Fanuel Mashaba from Nzumele village in Giyani, Limpopo.

“Most Nzumele residents get water from rivers in which used diapers are dumped. Residents cannot afford to buy water every day as most are unemployed,” says Mashaba. On Thursday he was among representatives from over 50 villages across Giyani who gathered at the community hall where they were addressed by Minister of Water and Sanitation Senzo Mchunu.

The minister was there to update communities on projects meant to provide and improve water access to villages. This follows a protest on 3 October, where protesters shut down part of the town to demand that the Department of Water and Sanitation fulfil its promises on the Giyani water project.

We reported in June on how the effects of tender irregularities and alleged corruption in the 2014 Giyani bulk water project continue to be felt by hundreds of thousands of people in the Mopani District. The Giyani water project, which was supposed to be completed in 2017, has been plagued by controversy and failure despite an estimated R4-billion in public funds spent on it.

In May this year, Mchunu promised that the Giyani project will be completed in September. But this date came and went, and still households are without access to clean running water. The Mopani District Municipality had said that it had provisioned R540-million for the 2022/23 financial year towards water and sanitation projects.

This week, Giyani residents were more sceptical during Mchunu’s latest visit to Giyani. Mchunu again promised that the project would be completed soon, but did not set any dates for when households would get water.

He apologised for not meeting the September deadline and acknowledged that corruption had hampered the water project’s progress.

“Part of the delay which impacted our schedule to complete the pipeline was two Vhembe District traditional leaders who are against the pipeline passing through their areas from Nandoni Dam [in Vhembe District] to Giyani [in Mopani]. While we could not have foreseen these challenges, we are now better equipped and hope to finalise the outstanding issues,” said Mchunu.

“As a precautionary measure, money for the whole project is going to be withheld by the department. It will only be released when a job is done,” he said. Mchunu said the department is investigating the alleged corruption and believes the perpetrators will be held accountable.

A resident who asked not to be named said: “Since 2014 there has been a lot of talk about water. Most ministers visit us to give time frames for when the water project can be completed, but to date we are still without water. We will only believe in the minister when water is running in our villages.”

Next:  Maternity wards at Dora Nginza Hospital “chaotic” as nurses down tools