Venice Burgins had made her views on Communicare clear in social media posts. Yet she failed to recuse herself from a case involving the social housing company. 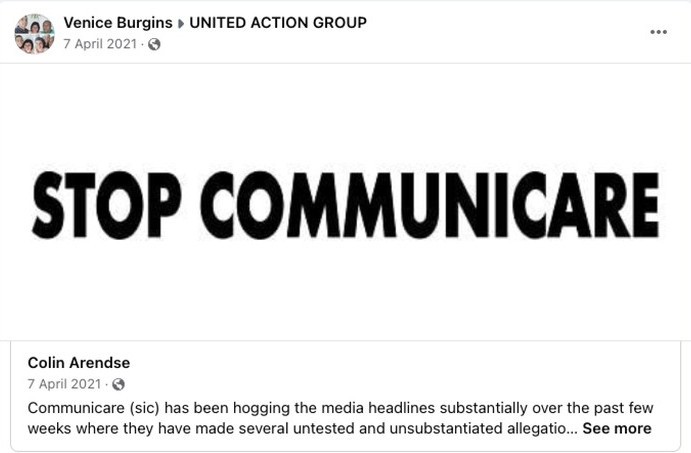 A post by acting magistrate Venice Burgins from April 2021. In August 2022, Burgins ruled against Communicare. Sources for all images: Facebook, fair use

In August, acting Magistrate Venice Burgins ruled against an application by social housing company Communicare to evict tenants who had stopped paying rent and owed nearly R100,000 in arrears.

But behind this apparently mundane case in the Cape Town Magistrates’ Court lies a tale of undeclared bias and animus – an acting magistrate with a history of campaigning against the social housing company.

The case was relatively straightforward: Communicare owned a property occupied by people who had not paid rent for a long time, and the person with whom Communicare had its lease agreement no longer lived there. Instead, her sister and her sister’s children lived on the property. And yet, Communicare lost.

The case was first heard in June 2021, and postponed by Burgins to 20 May 2022. Judgment was then reserved, and delivered on 3 August.

Burgins read out her ruling, taking three hours to get through its 63-pages. Its length was unusual for an eviction dispute as was its reading out.

The ruling includes substantial original research by the acting magistrate, including a difficult-to-follow meditation on the role of ubuntu in the rule of law.

Burgins includes paragraphs copied directly, without alteration and without quotation marks, from the respondents’ affidavits. This leads to sentences such as:

“The Companies and Intellectual Property referred to as the ‘CIPC’) which is the current office of the then Registrar’s office cannot produce all the above relevant documents (memorandum and articles, special resolution for name change, Ministers approval of name change, alteration to memorandum and articles etc.) of the Citizens Housing League/Real Applicant from its archives now for the benefit of the Court in the Land Claims Court case that my legal representative is involved in, which is subjudice, and the fact that, the Cape Town Deeds Registry failed and/ignored my legal representatives request for all the above documents mentioned in the paragraphs above.” (Paragraph 53.11, GroundUp’s emphasis)

Among Burgins’s conclusions was that Communicare did not have “the necessary locus standi to act” against the people facing eviction.

Communicare had presented an affidavit deposed by a legal officer, authorised by its delegation of authority framework, but this was not sufficient for Burgins, who demanded a specific signed resolution by its Board of Directors.

The would-be evictees claimed in their papers that Communicare did not own the properties from which it sought their eviction, and that the Land Claims Court must rule on this. Burgins accepted this argument.

Communicare presented the court with a title deed, in the name of the Citizens Housing League, which is what Communicare used to be called. This too was not sufficient for Burgins.

Burgins also did not approve of Communicare seeking an eviction order against defaulting tenants and sub-lessees:

“I find that the Applicant’s conduct in dealing with the application before the Honourable is tantamount to a trial by ambush. The Applicant’s treatment towards the Respondents before this Honourable Court, is a stark reminder of the brutal dark days during the Apartheid days in our country.”

“To all intents and purposes, the entire suburb of Ruyterwacht was a social housing scheme that was administered under the previous New National Party government and its predecessors. So, in the absence of any other proof to the contrary, it is common cause that the whole suburb of Ruyterwacht was part of a special government social housing scheme,” wrote Burgins, in a section dedicated to her own research.

She does not quote from the Social Housing Act in her judgment, which would have been useful to determine Communicare’s statutory obligations. The regulations of that Act compel social housing companies to collect rent to fund their operations and forbid subletting.

“As a creature of statute Magistrates must also confine themselves to the law but we also have to be open to the evolvement of times as laws are not written in permanent ink as it is ever changing,” wrote Burgins.

In September, Communicare lodged a review application in the High Court against Burgins’s ruling, arguing that it should be reviewed, set aside and declared invalid.

Communicare’s affidavit presents evidence that Burgins was biased against Communicare before and during the hearing, and in her ruling.

Communicare argued that Burgins’s ruling failed on three grounds: (1) She included inadmissible evidence and excluded perfectly good evidence. (2) She conducted the hearings in a manner that amounted to gross irregularity. (3) She had an undeclared, long-standing animosity towards Communicare that she did not declare before the hearing.

Communicare claims that, unbeknown to them during the hearing, Burgins had “a dual interest” in Communicare and in the outcome.

Communicare attach a number of screenshots from Burgins’ personal Facebook page, and a page that she administers, called “UNITED ACTION GROUP”.

From 2018, Burgins appears to have participated in a social media campaign that uses slogans such as “#CommunicareMustFall”.

Communicare gives seven examples of posts that appear to show her long-standing bias against the company. GroundUp found many more examples.

The first interaction was on 3 November 2018, when Burgins seems to have been a guest at a public meeting at Ruyterwacht, a Communicare property. It is not clear what her role was at this meeting. 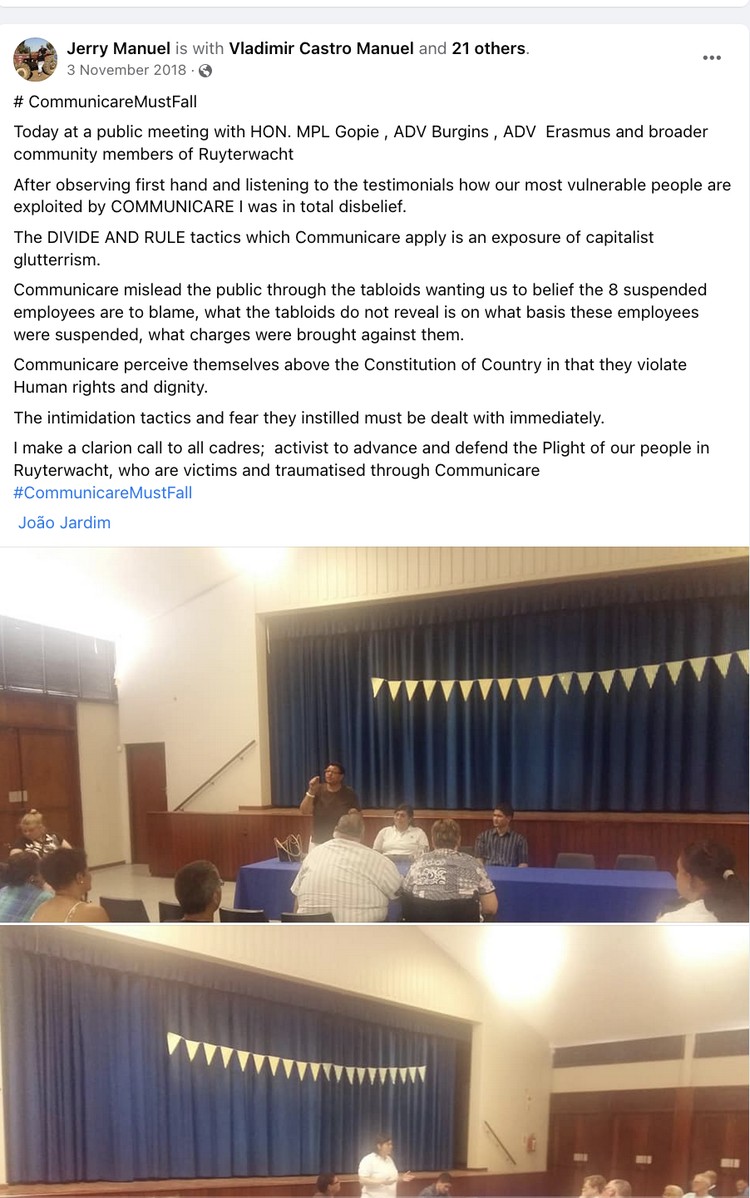 Burgins is tagged in and comments on this post by Jerry Manuel. GroundUp believes the woman in the white shirt is Burgins. Manuel talks to the exploitation of tenants by Communicare, supports suspended employees, and ends with the slogan “#CommunicareMustFall”.

“Forward we shall March to a better Ruyterwacht for All,” wrote Burgins in the comments to the post, as shown in the image below. 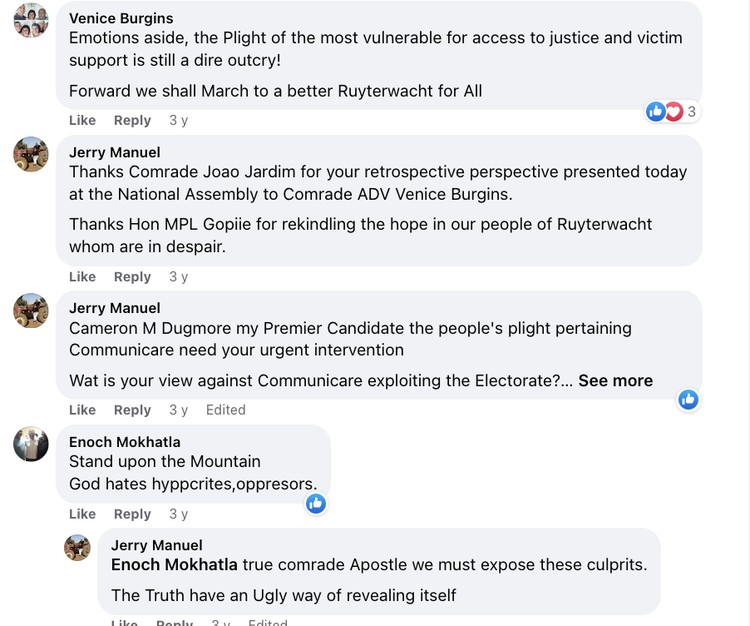 Jerry Manuel and Burgins have been directors in a non-profit company called the Ukambavimba Foundation since 2017.

After this, most of Burgins’s social media activity consists in sharing posts by Colin Arendse that are aimed against Communicare. 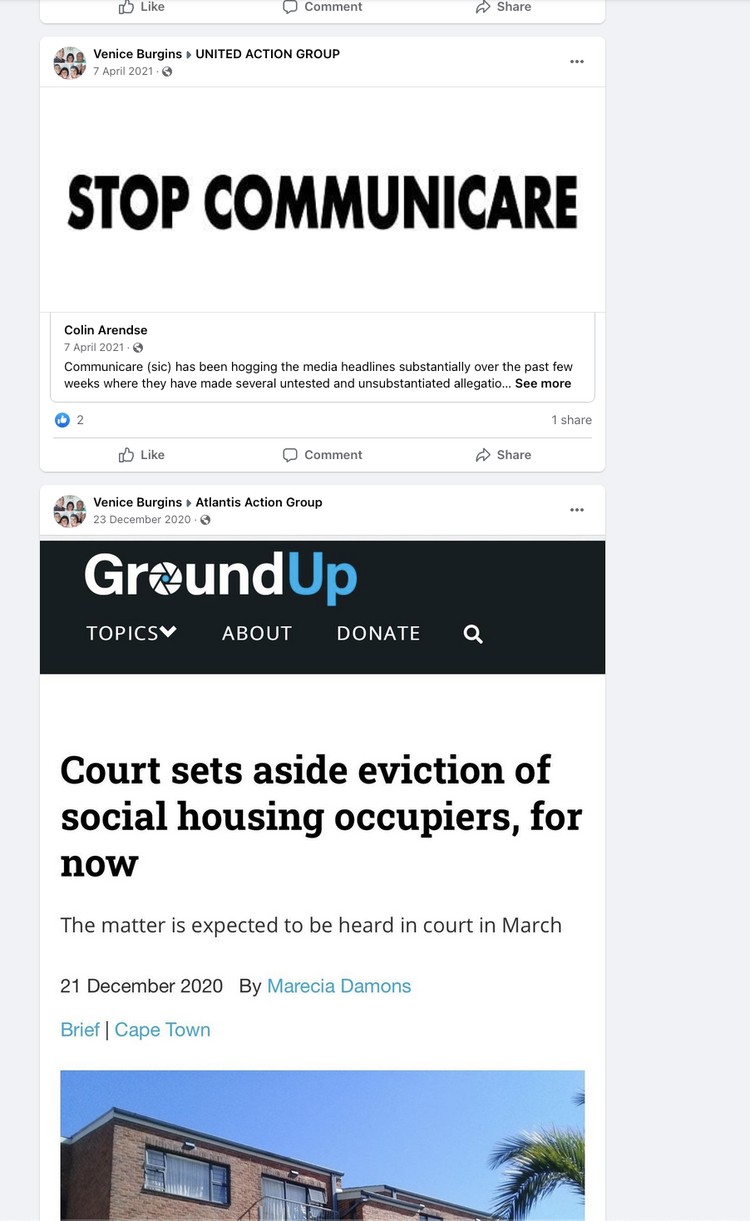 Note this shared post from 7 April 2021 with the image “Stop Communicare”.

Also included in this image is a shared screenshot of a GroundUp article: “Court sets aside eviction of social housing occupiers, for now”. GroundUp retracted this article almost immediately, as we had been misled by anti-Communicare activists, including Colin Arendse. No eviction was set aside, only papers were filed.

Occasionally Burgins comments on posts. On a 15 December 2020 Communicare-related post, shared from Arendse’s account, Burgins writes: “We the people need o stand up against any unjust system auchestrated by injustuces” (as written, see image below.)

In its application, Communicare includes a number of further comments by Burgins:

“The struggle continues and we shall EXPOSE the Communicare Rot exploiting our people.”

“We must expose Communicare and its Cabal and safeguard our people against this pandemic called … GREED.” 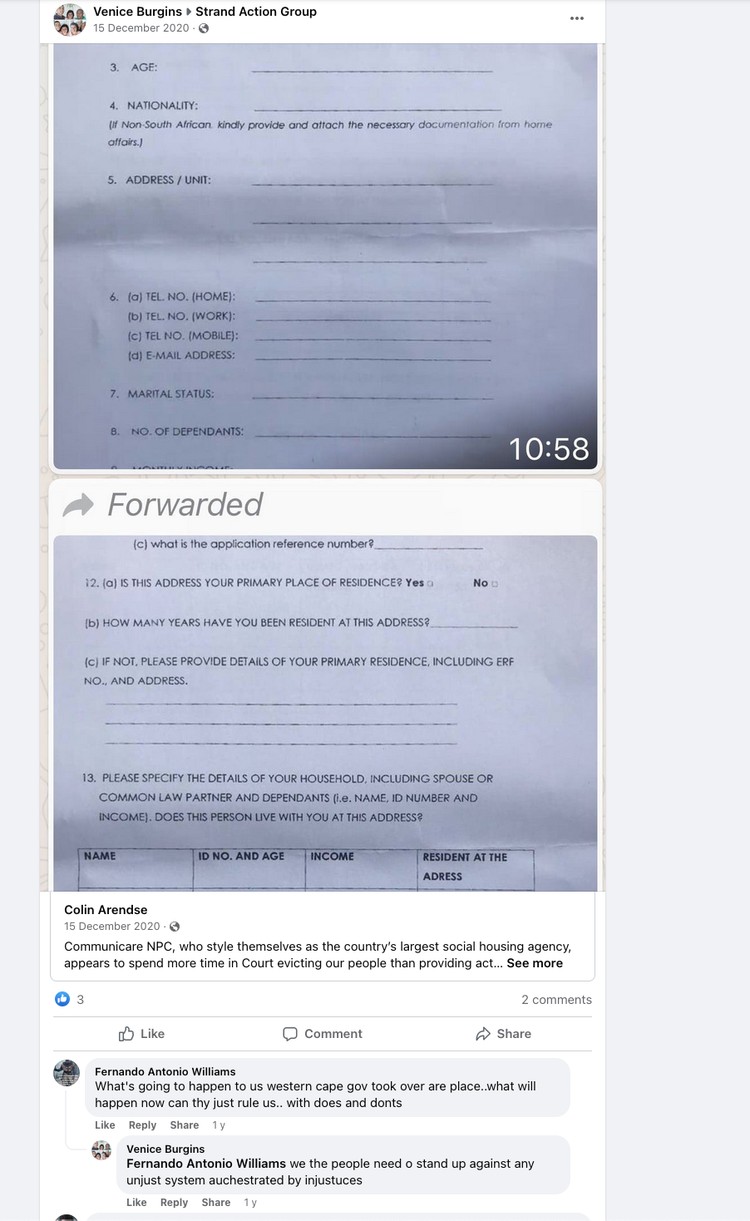 Her social media activity extends into her time as a magistrate hearing the case: 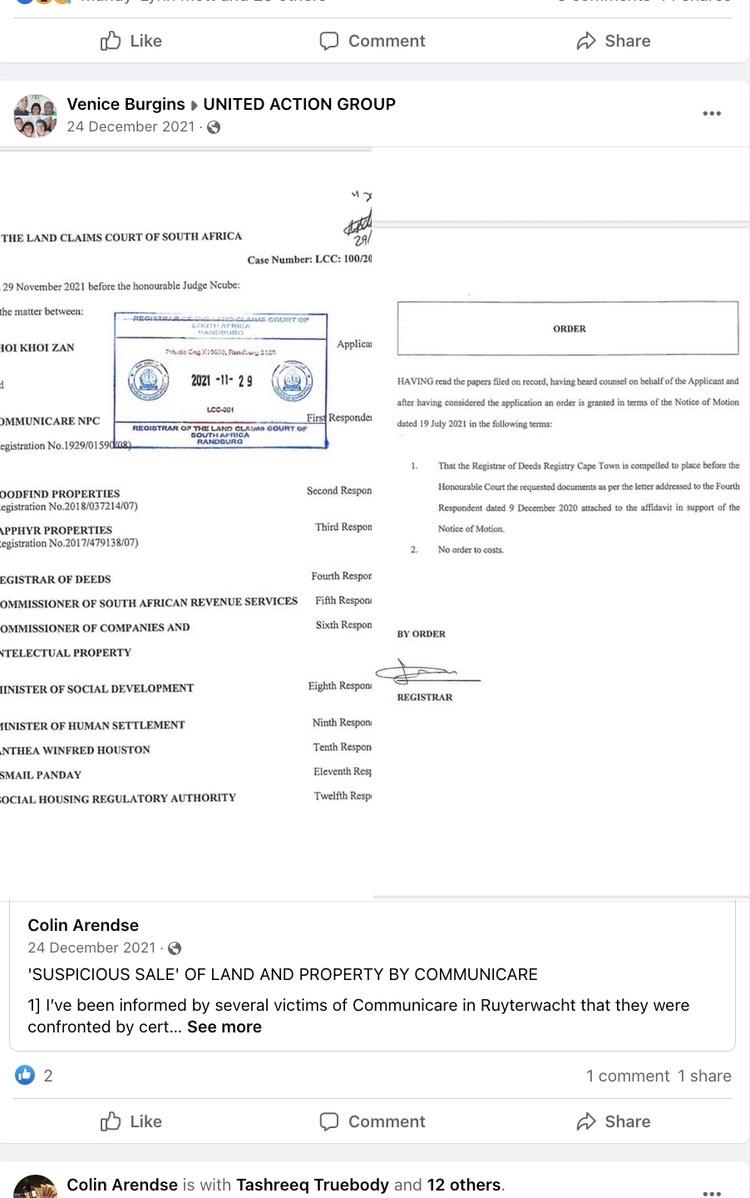 Communicare maintains that Burgins’s activity indicates a long-standing interest in them and this matter. She did not declare this before being assigned this case and brought into the ruling.

Burgins’ activism alone should have been sufficient to compel her to recuse herself. Communicare argued that Burgins’s biases were on full display at the hearing, that she imported “her own personal preconceived notions of Communicare”.

One of them claimed she would be made homeless by the eviction. But a social worker’s report found that she was employed and could afford rent elsewhere, even nearby.

Burgins’s judgment included her own non-legal research. She quoted from a thesis, government websites, and IOL news articles to promote arguments that Communicare was not entitled to seek an eviction order against defaulting tenants.

Communicare alleges that Burgins’s prejudice against them extended to her selection of evidence. She rejected Communicare’s admissible evidence for no good reason and allowed the would-be evictees to admit evidence that should not have been allowed. She accepted multiple supplementary affidavits that had no bearing on the issues under interrogation in the hearing, including submissions on a matter involving Communicare that had been brought before the Land Claims Court relating to its history of ownership over its properties.

Burgins, meanwhile, refused to accept Communicare’s delegation of authority, or its title deeds, or Windeed reports that showed the name changes of the company.

Communicare says Burgins anti-Communicare activism shows a “calculated prejudice”. It wants the entire proceedings to be reviewed, set aside and declared invalid. Communicare wants its eviction orders granted or a new hearing.

Communicare worries that if this ruling is allowed to stand, the adverse media and the potential of this case to influence other magistrates, could put them in a difficult position with other defaulting tenants.

No date has been set for the review.

Kabelo Letebele, communications manager at the Legal Practice Council, told GroundUp that according to its records, Burgins was not registered at present, having ceased practising on 31 January 2021.

Naome Manaka, chairperson of the ethics committee and spokesperson for the Magistrates’ Commission, confirmed that Burgins is no longer an acting magistrate.

GroundUp has, since late September, attempted to contact Burgins using various channels. We have received no reply nor acknowledgment.

Next:  Companies are rushing to explore offshore oil and gas