Lack of fuel brings Tshwane buses to a stop

Union says those responsible must be punished 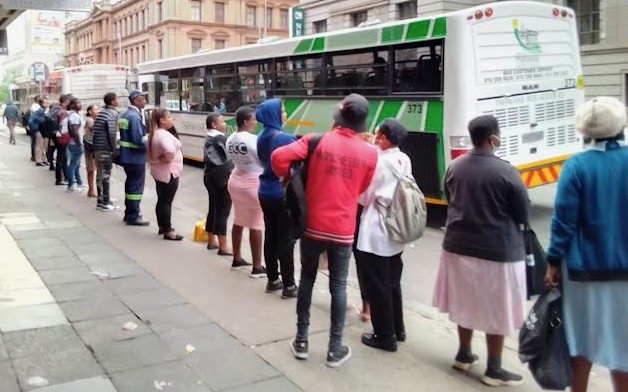 Tshwane municipal buses were running again on Wednesday after a two-day halt due to fuel “glitches”. Photo: Ezekiel Kekana

Fuel supply “glitches” brought half of the Tshwane municipal bus service to a halt for two days, leaving commuters stranded. The buses are running again but the South African Municipal Workers’ Union (SAMWU) has called on the City of Tshwane to take action against those who failed to procure fuel.

Buses stopped running on Monday and Tuesday. The City explained that the fleet had “experienced a shortage of diesel”. A supplier had failed to deliver fuel due “to some logistical glitches”, the City said.

SAMWU provincial secretary Mpho Tladinyane said action should be taken against “those who have neglected their duties”. The union, whose members include municipal bus drivers, had warned the City to replenish its fuel supply. The union marched to the City offices in August demanding fuel for 80 buses stuck at the depot.

Tladinyane says it is disappointing that the administration has failed to maintain supplies. SAMWU says the fuel shortages have affected other departments, including the metro police. The City did not confirm this.

Mayoral committee member Kingsley Wakelin, whose department is responsible for ensuring that there is fuel for municipal vehicles, had previously said that the City is going through financial difficulties.

The City told GroundUp that it runs “more than 160 bus operations per day.” With the failures of Metrorail, the buses have become the cheapest mode of transport for many commuters.