SANDF says uniforms will be 100% made in SA 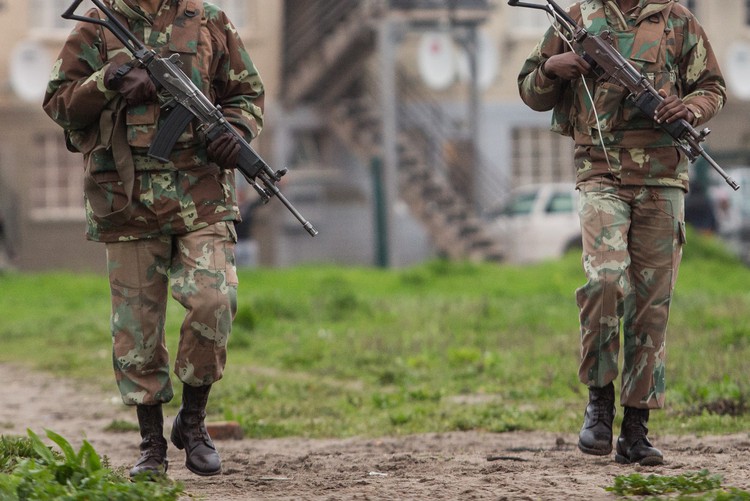 The SANDF is to get new uniforms, which will be 100% manufactured in South Africa. Archive photo: Ashraf Hendricks

The decision to manufacture new uniforms for the South African National Defence Force (SANDF) entirely in South Africa will create much needed jobs in the textile and clothing industry, says the Textile Federation.

The new uniforms will be made locally in line with government regulations designed to bolster the clothing industry. At first, the special fabric needed for the uniforms was imported, but now local manufacturers are being taught how to make it.

The Textile Federation (Texfed) has welcomed the decision by the SANDF to source these new uniforms locally. Brian Brink, executive director at Texfed told GroundUp that the project would help grow the local textile and clothing industry and create “desperately needed employment opportunities”.

The Council for Scientific and Industrial Research (CSIR), which has been leading the new design of the uniforms, says it is talking to local textile manufacturers to supply the material for the uniforms, scheduled for launch at the end of this year.

The Preferential Procurement Policy Framework Act (PPPFA) stipulates that goods ordered by state institutions must contain a minimum of local content. The policy was first introduced in 2011 in a bid to protect South African industry and jobs.

The Department of Trade and Industry designates the minimum level for each industry or sector, and in the case of clothing and textiles this is 100%.

This is especially the case with state institutions, who have a responsibility to meet these minimum thresholds when procuring large orders, such as the SANDF uniforms.

He said during the design stage the woven fabric had to be sourced from abroad since “no capability exists locally to provide the required material”.

But the CSIR, in an attempt to “empower local industry”, had been working with local manufacturers to supply the material or the final order, Mgobozi said.

The CSIR’s manager of the Landwards Impact Area, Tleyane Sono said, “We support our local industries and always look for material and components locally before going abroad”. He said the CSIR was researching the best options for the materials and the materials would still have to be tested.

Department of Trade and Industry spokesperson Bongani Lukhele said the department had written to the SANDF to “bring to its attention the need to comply with the localisation policy in its procurement processes”.

Problems with uniforms and boots were first raised by SANDF soldiers more than three years ago in 2018 after a deployment in the Democratic Republic of the Congo (DRC). Three years later, in response to a question, then-Minister of Defence and Military Veterans said trials for the new model uniforms had started in June this year and the full provision was scheduled from December. New boots for soldiers had been supplied since the beginning of July.

Previous:  Should the proposed N2 toll road through the Wild Coast be moved?