12 toilets for 3,000 people, so elderly couple use the bushes

600,000 are people waiting for housing opportunities in the Western Cape 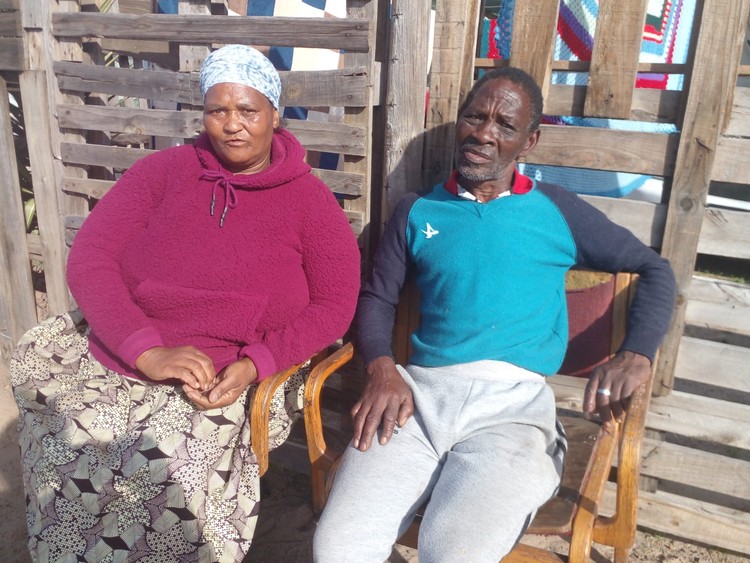 Witsand pensioner Griffiths Makwela, 72, tries to accompany his partner Rosina Makwela on the five-minute walk through the bush from their shack each time she needs to go to the toilet.

They live at Sport Field informal settlement in Witsand near Atlantis, Cape Town. They are among over 3,000 people who share 12 communal toilets in the settlement. The toilets are some distance from them.

“It’s embarrassing for us as old people to be seen relieving ourselves in bushes. So now we go before sunrise when people wake up or when the sun is about to go down,” said Makwela.

The elderly couple told GroundUp they often hold off relieving themselves during the daytime to avoid the embarrassment of people seeing them. In the dark, they are afraid of getting mugged. There is no public lighting in the informal settlement.

According to Rosina Makwela, they applied in 2015 for an RDP house under Griffiths’ name and were informed that their application had been approved. They are yet to receive information on when they will get an RDP house.

The provincial human settlements department could only confirm to GroundUp that Griffiths Makwela was one of 600,000 people on its database. The department confirmed that Makwela applied for an RDP house in March 2015. It is unclear why the couple have not yet benefited from any project.

Community leader and deputy secretary of SANCO in the region, Nolufefe Mbombo, said people first moved onto the land in 1997 while waiting for their RDP houses to be built. When that group moved into their houses, backyarders apparently moved into the vacant shacks on the land.

“The informal settlement has grown since 2009. It’s double the size it used to be because people want to have places of their own and houses are expensive in Western Cape so they end up occupying land,” said Mbombo.

She said people in the settlement struggle to access government services, such as healthcare, sanitation and water.

In response to our questions, mayoral committee member for water and sanitation Zahid Badroodien said there is not enough space to provide more services in the densely populated settlement.

He urged residents to contact their ward councillor if they want portable flush toilets. These toilets are serviced four times a week, he said.

Beverly Van Reenen, mayoral committee member for energy, said the City is in talks with Eskom to get sufficient lighting for the informal area in Witsand.

Natalie Watlington, a spokesperson at the provincial health department, acknowledged the need for “comprehensive primary healthcare in the Atlantis area”. She said at present the City of Cape Town offers a mobile clinic service four times per month for the Witsand community, and emergency cases are sent to Wesfleur Hospital.

Next:  “It’s survival of the fittest” says blind homeless woman

School with long history is in appalling condition, and the education department has nothing to say about it