Iqbal Survé’s newspapers take the side of the Lottery crooks Iqbal Survé’s newspaper group has taken a curious interest in the story of corruption at the National Lotteries Commission - and it appears to be taking the side of the crooks.

For four years GroundUp has reported on Lottery corruption and mismanagement. Independent Media has been largely silent on the matter. But in the last few weeks, there has been a spate of articles on the Lottery on Independent Online (IOL), stuffed with the usual blend of dodgy reporting and high-minded indignation.

In July, GroundUp reported how the golf estate home of Lottery boss Thabang Mampane was paid for with a grant that was supposed to rebuild a Limpopo school. Our coverage may have contributed to Mampane’s resignation in August.

Independent’s newspapers and IOL could have republished GroundUp’s articles, which are available under a Creative Commons licence. They did not. They could have sent one of their reporters to investigate our findings about Mampane’s house. They did not.

Instead, the Sunday Tribune (one of Survé’s newspapers) and IOL published an interview with Mampane in which she “reflects on her 10 years of service”. Far from countering any of the accusations against her, she makes all sorts of claims of “political interference” in the Lottery.

In another IOL article, Mampane is cited as claiming “that there were journalists working with certain board members” at the National Lotteries Commission “and, in return, these journalists had received funding from the commission”.

There have been only two journalists consistently working on Lottery corruption: Raymond Joseph (for GroundUp) and Anton van Zyl (for the Limpopo Mirror). They have often worked together. This extremely serious accusation of corruption is clearly aimed at one or both of them. Not a shred of evidence is offered for the claim — because, frankly, it’s absurd and there isn’t any — and neither Joseph nor van Zyl were asked to respond to the allegation.

The same article includes this photo and credit: 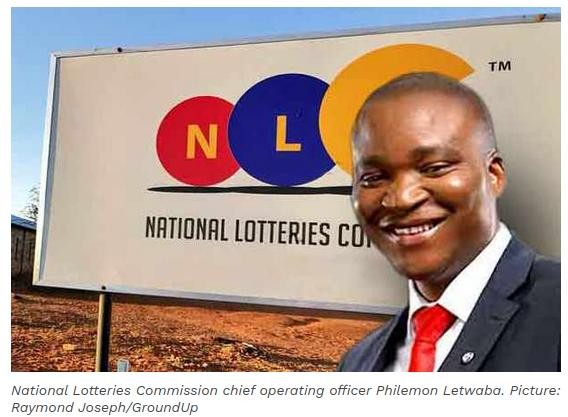 The photo is fake. It is a photo of Letwaba that was not taken by Joseph, superimposed on a photo of a Lotteries sign taken by Joseph. It could be an innocent error - or a way to insert Joseph’s name into the article to link him to Mampane’s allegation.

The same article starts: “Following the ongoing investigations and purging of mainly black executives and officials at the National Lotteries Commission …”.

We can see where IOL’s coverage on the Lottery is going – accusing those exposing the crooks at the Lottery of having a racist agenda. In effect they’re accusing black whistleblowers at the Lottery and black investigators at the SIU of racism. Also, the communities that have been robbed by the Lottery crooks of old age homes, schools and rehab centres are predominantly black.

And when the accusation of racism clearly won’t work, IOL has come up with other creative solutions. Reacting to the appointment as head of the Lotteries board of Barney Pityana, one of the “elders” of South Africa’s struggle and a man known for his integrity, IOL managed to describe him as a “pensioner”.

In an article on the “disarray” at the National Lotteries Commission after the suspension of another controversial figure, chief operating officer Phillemon Letwaba, readers were told that “the appointment of pensioner Pityana as the commission’s chairperson set tongues wagging with political parties and young people rejecting his appointment”. The “political parties” turned out to be the Economic Freedom Fighters (EFF), increasingly IOL’s favoured political partner, though not known for its strong stand on corruption.

And just in case readers hadn’t quite got the point, IOL went so far as to ask Pityana himself in an interview if he didn’t think he was a bit too old for the job. Pityana’s response is telling: his brief, he said, was to execute his tasks efficiently and “enable resources to go where they are intended, and not end up in some people’s pockets within the commission …”.

Since Survé got his hands on public money to buy the country’s largest newspaper group, he has used it to publish inaccurate, often downright false, stories to further his personal interests. But in the past few weeks IOL has gone further, establishing itself as the voice that defends state capture and attacking those - including journalists - trying to expose state capture.

It has repeated unsubstantiated allegations that the Daily Maverick is CIA-funded, and has run a nasty hit-job invading the privacy of a News24 journalist who has been investigating former Eskom chief executive Matshela Koko.

This last story is especially sinister. It sends a message: if you investigate state capture, expect Survé and his propagandists to come after you.