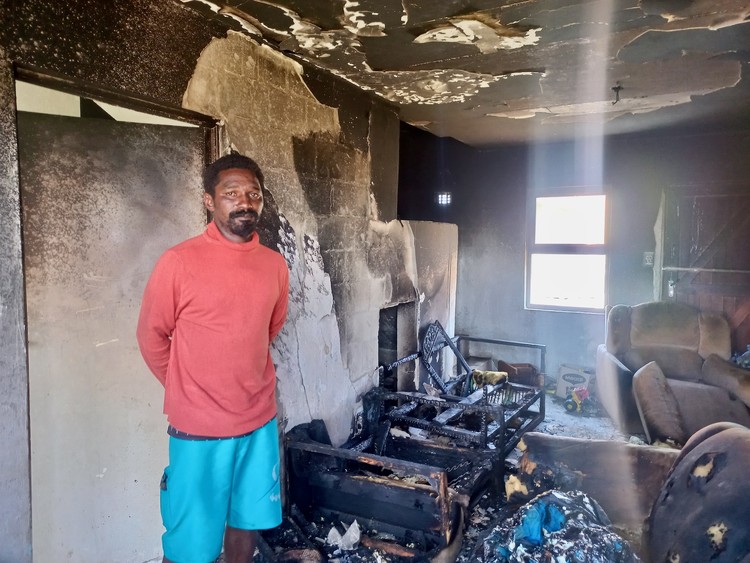 Msoja Nganu’s home in Kwanokuthula, Plettenberg Bay, was torched on Tuesday night while he was asleep. He jumped from the second floor window behind him. Photo: Siphokazi Mnyobe

Peter Mukonda, originally from Malawi, said his shack was set alight while he and his girlfriend were sleeping inside.

“I woke up and kicked the door open. I called for help from my landlady and neighbours,” said Mukonda. They managed to extinguish the fire and save his shack, but he is now too afraid to sleep at home.

On Monday, Mukonda had been forced out of his shack along with dozens of other immigrants ejected from their homes by South Africans who conducted door-to-door searches hunting for foreign nationals.

Many, including Mukonda, spent the night in a community hall. Earlier Monday evening, police used rubber bullets to avert a confrontation between xenophobic vigilantes and immigrants.

After a community meeting on Tuesday, Mukonda had returned to his shack, thinking things had cooled off.

Msonja Nganu, from Tanzania, also had his house torched that night while he was asleep upstairs. He had to jump from a second-floor window to escape the fire.

“I was lucky the smoke did not kill me first. I am also grateful my children were not here. My passport has been destroyed in the fire. They first closed my barber shop and now my home. I am left with nothing and it hurts so much,” said Nganu.

Local landlords of immigrants are furious.

“The houses torched are ours, South Africans. They are now telling us to evict immigrants or we will lose our houses,” said a landlord, who asked not to be named.

The landlords say they are further aggrieved after the Plettenberg Bay Magistrates Court on Wednesday released a man said to be the leader of the operation to chase out immigrants. He is accused of assaulting Zukiswa Mdlalani with pepper spray in her home.

He was released without bail on a warning not to interfere with witnesses. He is to appear again in court on 19 October.

Xabiso Gungulu, leading the landlords and community members against the operation to drive out immigrants, said: “The operation started as a campaign to chase drug dealers out of the community, but whenever the operation gets a tip-off that South Africans are selling drugs, nothing is being done.”

A group of residents and landlords went to the police station after the community meeting on Tuesday to voice their opposition to the xenophobic violence that had occurred on Monday, and also to show their support for Mdlalani after she was assaulted.

Mdlalani said the law must take its course. “My children are traumatised but we are not shaken. I could not allow them to intimidate me and I was not going to let them get away with bullying me and my family. I had to exercise my rights and open the case,” she said. 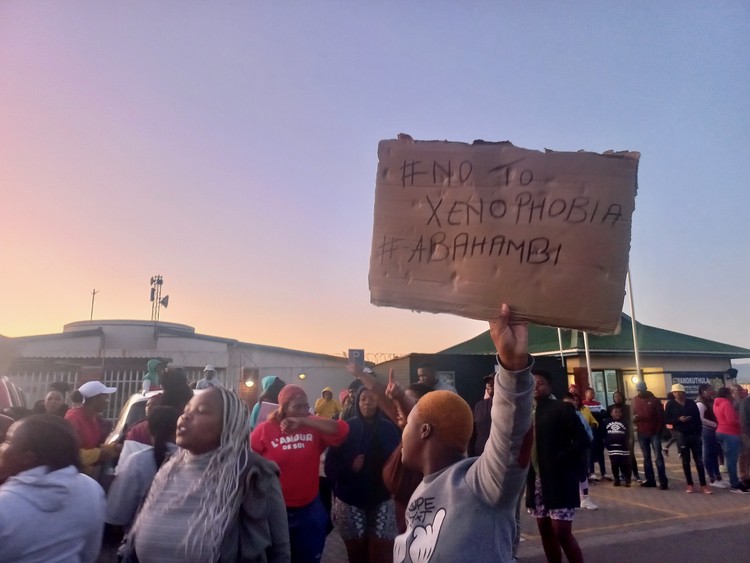 Landlords and some community members protest outside the police station on Tuesday against residents driving immigrants out of their community.