Immigrants forced out of their homes in Plettenberg Bay

They say the police have failed to protect their rights 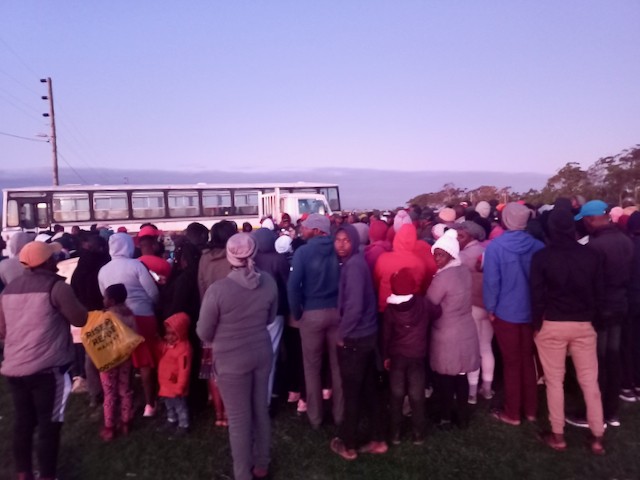 Dozens of immigrants driven out of their homes gathered outside Kwanokuthula police station in Plettenberg Bay, demanding to speak to the station commander. Photo: Siphokazi Mnyobe

On Monday night, hundreds of immigrants, many holding bags with some of their possessions, gathered in front of Kwanokuthula police station in Plettenberg Bay. They had been driven from their homes by local residents and wanted to know why the police were not protecting them.

A South African woman was at the police station saying she’d been pepper sprayed because she had refused to allow her house to be searched. Her husband is a foreign national.

South African community members also arrived, accompanied by two police vans and one law enforcement vehicle that had earlier been seen patrolling alongside the community as locals searched door-to-door for immigrants.

They carried sticks and sharp objects. The immigrants started to pick up stones. A conflict was imminent.

After refusing to leave, at around 9:30pm, police used stun grenades and rubber bullets to disperse the South Africans.

“I am going to sleep in front of this station with my bags and child,” an immigrant told GroundUp. “The mayor must intervene and assign us a place to sleep tonight.”

She said South Africans arrived at her shack, carrying sticks and hammers, and forced their way into her home. They told her to leave and to tell all other immigrants to leave as well.

“They did not ask for my passport or work permit. They did not care to even see it. I tried to show them the papers, but they were not interested,” she said.

She was afraid her stuff would be stolen while she was away.

She sent a message on a WhatsApp group to warn other immigrants in the community.

“I don’t have money to up and leave for Zimbabwe,” she said.

About 30 immigrants then slept in the Kwanokuthula community hall on Monday night.

Unhappiness and conflict with immigrants has been building since August in the community. Ishmael Tanje, originally from Ghana, said several meetings in the past weeks were held between the community, landlords who disagree with the actions taken, and immigrant business owners.

Tanje said three weeks ago the community made a list of grievances against immigrants. They wanted spaza shop owners to employ South Africans. They also accused immigrants of selling drugs.

Tanje said it was agreed that shop owners will employ South Africans and teach them how to operate spaza shops, and that immigrants would help the community counter drug dealing.

But later on, Kwanokuthula community members again approached them, saying immigrants must reduce the number of spaza shops they owned and make way for South African-owned shops.

On 30 August, Bitou Mayor Dave Swart, municipal officials, hundreds of Kwanokuthula community members and immigrant representatives met at Simunye Community Hall. The outcome was shared on the municipality’s Facebook page. A march against immigrants was given the go-ahead as long as there was no destruction or intimidation.

It also said: “Illegal foreign nationals must be dealt with in line with the laws of the country and through cooperation between SAPS, Home Affairs, and other relevant departments”, and that “the establishment of spaza shops will be regulated” and “Bitou Municipality to finalize the spaza shop policies and by-laws”.

Mayor Swart also posted on Facebook, saying that the Kwanokuthula leadership have advised that there were 69 shops in Kwanokuthula owned by immigrants, and that “it was agreed that foreigners will reduce their quantity of shops to give South African nationals the opportunity to open and trade … Kwanokuthula community is happy.”

On 1 September the march went ahead. But a community leader, who gave the name Tshala, distanced the march and memorandum from the events of Monday night.

Previous:  “Ubuntu is alive” and it sounds like marimbas