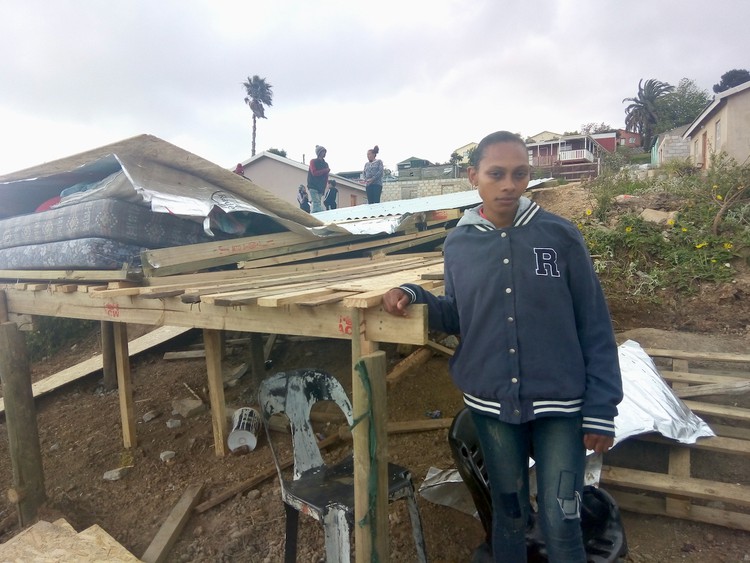 On Sunday hundreds of people rioted in Knysna, looting businesses and bringing traffic on the national highway to a halt. An officer of the Red Ants was shot but was “luckily wearing a bulletproof vest” and “is not seriously injured” according to the municipality. Chaos seems to have erupted after two shacks were demolished by the Red Ants acting for the municipality.

Knysna Municipality Mayor Elrick van Aswegen said, “The buildings in question were illegal structures that were illegitimately constructed on land not owned by the invaders.”

The Lemco Garage and its shop at the entrance to Hornlee was looted as was the adjacent Hornlee Hotel bottle store. Some stolen wine was later recovered by police.

At least four people were arrested for public violence. One police official was injured.

The owners of the demolished shacks say they are left destitute.

“I was still sleeping when the Red Ant people came to destroy my shack,” said Irafaanshia November. “The people didn’t communicate with me. They just started destroying my hard work.”

November was retrenched during the lockdown. She had been staying with an aunt and 14 family members in a four-room house. There were two shacks already in the backyard and she had to find her own place. She used her UIF money to buy the building material. She moved in on Friday. On Sunday it was flattened and dumped in an open field.

The other shack owner, Leander Meugenė, said, “They pushed my mother and aunt down and went on with the plan to destroy my place. This is when the community members started coming in numbers to stand with me.”

She said they asked to see authorisation for the demolition. Chaos then erupted and the police and the Red Ants were forced out of Hornlee onto the N2.

Johnathan Wildeman, a neighbour, was shot several times with the rubber bullets, three to his chest, one above his right eye, both arms and his right leg. “They first shot me on my chest. I tried to cover my face, that is how they shot both my arms, and then eventually managed to shoot me in my face,” he said.

“The Red Ants started shooting at us. We then threw stones at them and pushed them out of our neighbourhood,” said Wildeman.

On Monday community leaders met with Van Aswegen. A follow up meeting will be set for Friday with the community.