Homeless: Hundreds volunteer to count people living on the streets of Tshwane 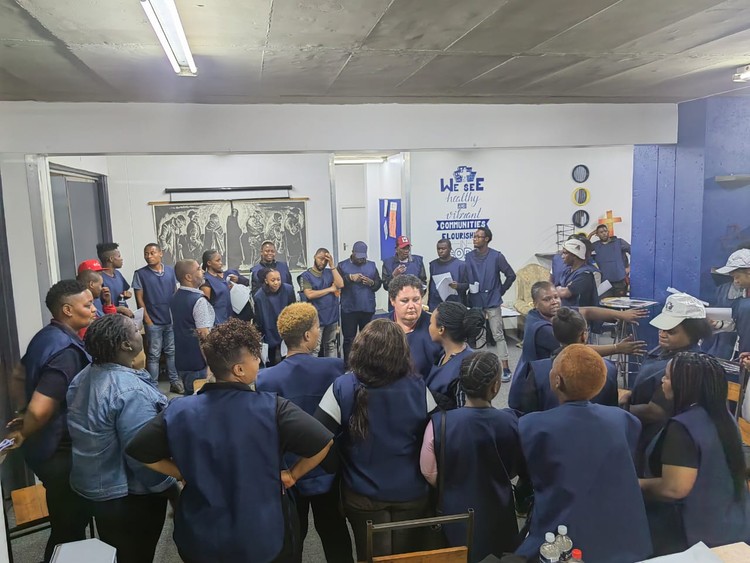 Some of the volunteers gathered in Pretoria’s city centre ahead of the count which started at 8pm and ended at 2am on Thursday. Photo: Chris Gilili

With South Africa’s economy staggering, and two in every five adults unemployed, “villages” of homeless people are springing up across cities as increasing numbers of people find themselves on the street. In our series on homelessness, GroundUp looks at how they are managing to get by.

Late on Wednesday night we joined some of the more than 400 volunteers who took to streets across Tshwane at nightfall to help with a census of homeless people. The count started at 8:30pm and ended at 2am on Thursday.

In 2020, the United Nations Commission made its first resolution to end homelessness. In its resolution, the UN Commission called for a response by all sectors within governments and societies to work towards addressing homelessness.

But to do this, municipalities have to first understand the scale of what needs to be done. In September, the then Gauteng Social Development MEC Morakane Mosupyoe announced that the province allocated over R87.4-million to metros to address homelessness.

In a bid to get a better idea of the number of homeless people in Tshwane a city-wide count was organised by activists at the Unit for Street Homelessness at the University of Pretoria who partnered with the City of Tshwane and Tshwane Homelessness Forum. This is the first time homeless citizens were formally counted by the municipality.

On Wednesday night, we joined volunteers in central Pretoria and Mamelodi.

“To address homelessness or other social challenges effectively, accurate data is important. The count helps to have more accurate data on the distribution of people across the city, the causes of people’s homelessness and trends,” says Professor Stephan de Beer, Director of the Centre for Faith and Community at the University of Pretoria.

De Beer said the hope is that the count will make advocating for appropriate budgets and services for homeless people better. “Hopefully it also debunks some of the myths about homelessness,” he told GroundUp.

Volunteers spoke to people who were on the streets, as well as people in abandoned buildings and at a few shelters.

One of the people they counted in the city centre, Kabelo Matome, said he has been homeless since 2016. He said he moved to Pretoria from Limpopo for a job in construction. When his contract ended, he could no longer afford to pay rent in Atteridgeville.

“I refused to go home with the failure of losing my job. I’m hoping to get into a shelter but I don’t know how to do that. I have also since fallen victim to substance abuse as a way to cope. Life is risky on the streets, ” said Matome.

Nombulelo Ndandani, one of the volunteers from the Tshwane Urban Activism School, said it was “overwhelming” to see so many people sleeping outside.

Ndandani said she spoke to people who had come to the city from rural communities across the country in search of a better life but were unsuccessful. 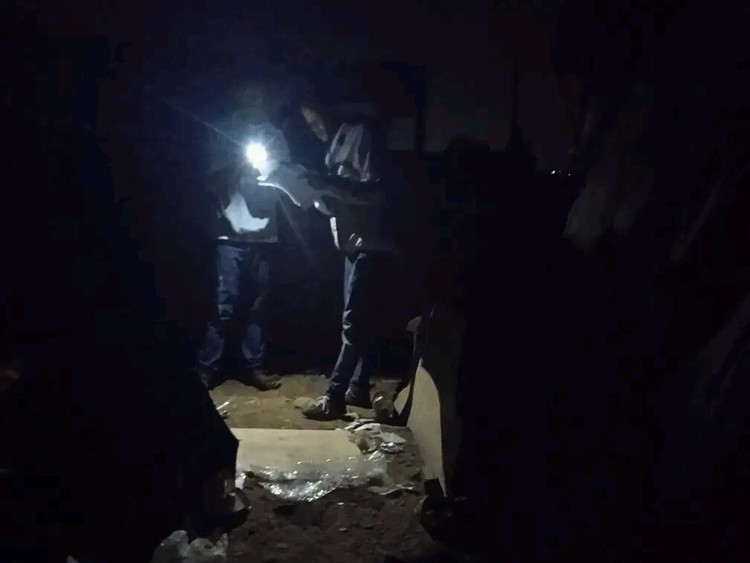 Volunteers navigated their way in the dark in a bid to find as many people as possible who were sleeping outside. Photo: Chris Gilili

“About 90% of the homeless people we met are using illegal substances. They use drugs and alcohol as a coping mechanism. Others said they were affected by the absence of father figures in their lives and went astray,” said Ndandani.

De Beer said they have started capturing the data collected by volunteers during the count. Once completed, a report with recommendations is expected to be released by the end of November.

“The City’s policy on homelessness states that every region should have a shelter. Currently only four regions have shelters. The City has a responsibility to avail its many abandoned buildings for this purpose,” he said.

“Counting homeless people is very important as it enables us, as an organisation, to better understand their needs. We are then also able to lobby the government to increase its budget allocations so that homeless people can also benefit,” Kekana said. 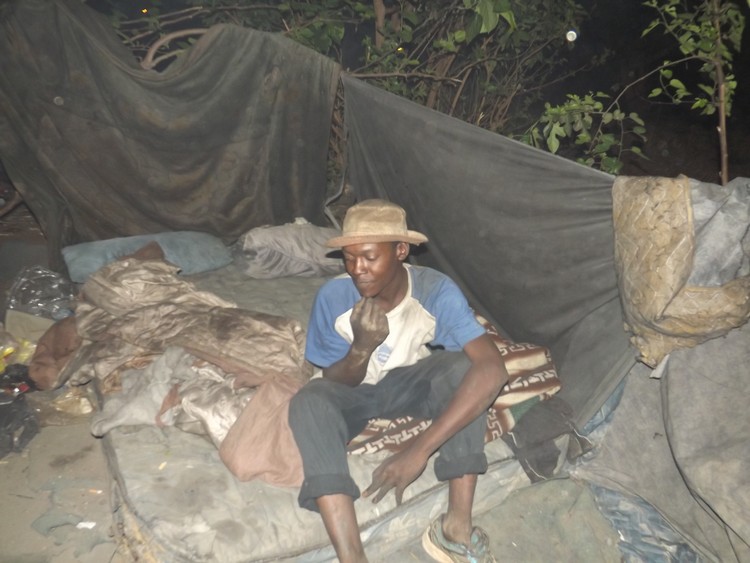 Harold Mabitsela says he has to cover himself with plastic sheets when it rains because the makeshift structure he sleeps in has no roof. Photo: Warren Mabona

In extension 11, volunteers found a group of several men. One of the men, Harold Mabitsela, told GroundUp that he has been homeless for more than five years. The 43-year-old said he is addicted to nyaope.

“Our hut does not have a roof. We cover ourselves with plastics whenever it rains. I was glad when the lockdown ended so I could freely go out and look for food.”

In Phomolong, Itumeleng Tshukudu, 37, was among a group living in a small shack together. “I wish the government could build us houses or shacks like this one,” he said.

Under the bridge in Phase 1 on Tsamaya Avenue, a group of men welcomed the volunteers who also had brought them food.

Vincent Ntuli, 33, said he has lived under the bridge for three years. He said he came to Mamelodi from Embalenhle in Mpumalanga in 2018 to look for work.

“I only found piece jobs. I started using drugs because I was stressed. I now realise that I made a big mistake because I cannot easily quit now,” he said. 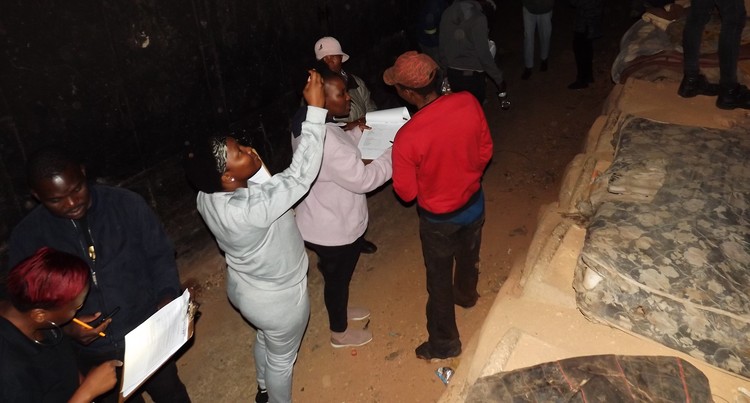 Volunteers with the Thandanani Drop Inn Centre count homeless people who were sleeping under the bridge in Phase 1 in Mamelodi. Photo: Warren Mabona

Chris Varthalitis, who sleeps in different spots in Sunnyside in the east of Pretoria, said he has been homeless for 25 years. “I need help to get a better place to stay. Most of the homeless shelters I know are overcrowded and living conditions are tough there,” he said.

According to City spokesperson, Lindela Mashego, there are ten shelters for homeless people in three of the seven Tshwane regions that are managed by the City of Tshwane with non-profit organisations. He said there between 1,200 and 1,400 people living at these shelters.

“At some point during the start of the Covid lockdown, there were over 4,000 beneficiaries in the shelters,” said Mashego. “However, this number cannot be interpreted as an increase. As alert levels [of the lockdown] went down.”

He said that the City’s services offered to homeless citizens include shelter accommodation, skills development, assisting with IDs, linking with employment opportunities, provision of chemical toilets, and psychosocial support.

Next:  Yoliswa Dwane, co-founder of Equal Education, has died

Previous:  Homeless: Shelters in Musina not coping with increase of people on the streets