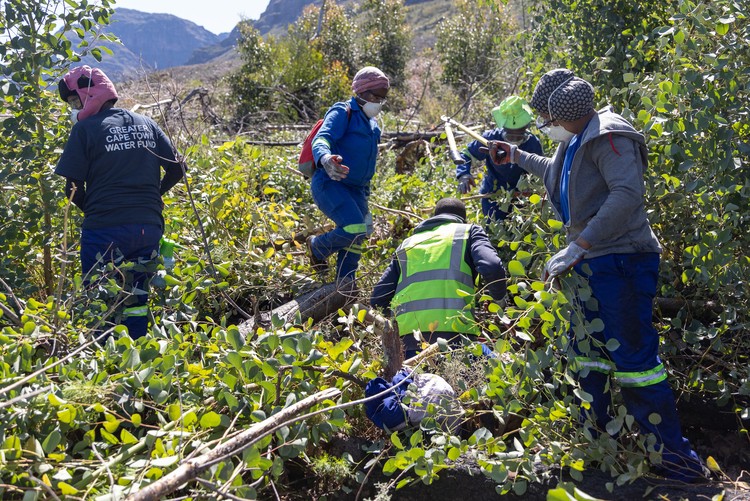 Thirsty alien plants such as pine and eucalyptus trees are being cleared from mountain catchment areas across Cape Town. These plants drain billions of litres of water.

The City of Cape Town partnered with The Nature Conservancy (TNC) in July 2021 and committed to a two-year contract for R50-million to clear invasive species around important catchment areas such as Wemmershoek, Steenbras, Berg River, and Theewaterskloof. So far 4,617 hectares have been cleared. Another 7,000 hectares will be cleared over the next year. About 1,088 jobs have been created through the project.

The City, in a recent statement, said clearing invasive plants will, in a few years, result in savings of billions of litres of water per year.

Research from 2018 by the Greater Cape Town Water Fund found that invasive species around these catchment areas contribute to significant water losses. It recommended that they be cleared as a sustainable and cost-effective way to reduce Cape Town’s water losses. According to the study, without intervention, the 55-billion litres of water sucked up by invasive trees could more than double in the next 30 years.

The researchers noted that initial control operations would cost up to R40,000 per hectare “in very dense invasions in rugged terrain and riparian areas”. After this, the cost should decline as plant density and size decrease.

Jasper Slingsby, of the Department of Biological Science at UCT, wrote in 2018 that invasive alien species were a greater threat to Cape Town’s water supply than climate change.

Speaking to GroundUp recently, Slingsby said the City’s project is “a good start” but “inadequate to get the job done”.

“If we actually want to fix this problem, we probably need about five times the investment to get it done, if not more,” he said.

The study by the Greater Cape Town Water Fund estimated that about R370-million is needed for catchment restoration to generate water gains of 50 billion litres a year. The City’s R50-million investment in the project is not enough, said Slingsby.

GroundUp joined the City and TNC at the Wemmershoek catchment to see the process.

Removing trees and plants in mountainous areas can be tricky. Richard Bugan, monitoring and evaluation manager at TNC, said that three teams are contracted to help clear invasive plants. Each team does manual clearing using chainsaws, loppers, and saws to cut down and remove the invasive trees.

The first team works in lower-lying areas; the second camps in remote areas; the third team operates on cliff faces.

This year Cape Town has had below average rainfall. “If we have another bad year in 2023, we’re going to be straight back in the same boat [Day Zero] again,” said Slingsby.