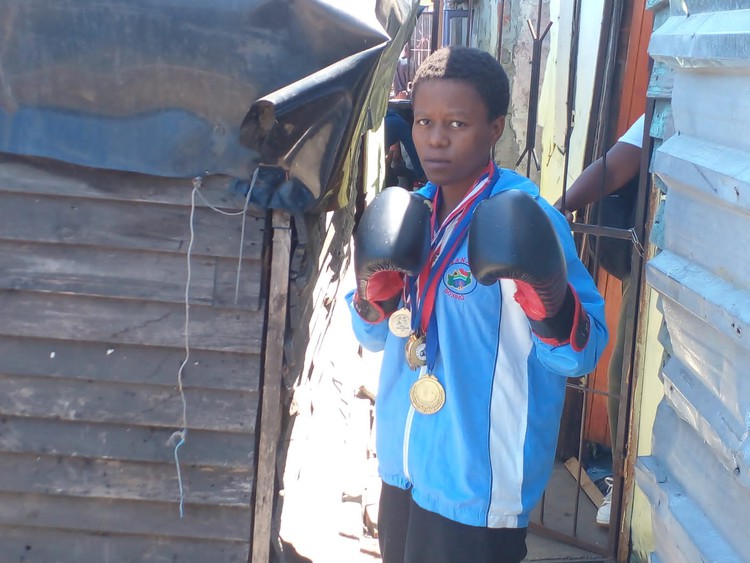 Emihle Ntunja dropped out of school in Grade 12 and says she spent the next few years sitting on street corners smoking marijuana. Now the 25-year-old from an informal township in Langa, Cape Town, is on a mission to change her life through boxing.

Ntunja left her home in Mthatha in the Eastern Cape after failing Grade 12 in 2014. She came to Cape Town to live with her siblings and try again to pass matric. But things didn’t work out as she’d planned.

“When I got here in 2015 things were not as rosy as I had imagined. Life was not easy and peer pressure from friends took over. I found myself using weed sitting on street corners, not going to school. My elder sister left to Saldanha and said I’m on my own,” said Ntunja.

Boxing helped her change her life, she says.

Ntunja registered to write her grade 12 in 2021 and studied on her own in the one-roomed shack she shares with her younger sister. This time she succeeded, earning a university pass.

“In 2019 I joined boxing but it has not been easy. I changed two gyms already because coaches in those gyms would ask for sexual favours until I found one here in zone 26. It’s a community hall that we share with a church,” she said.

“One thing I can tell you is that boxing saved my life even though I faced a lot of challenges. With the right coach I know I can go far,” she said.

She borrowed R350 from a microlender to buy a licence from Boxing South Africa. “For two months I could not pay back the money which had interest of 50%. Luckily for me the lady was understanding, as has not always been the case for others, and thank God I finally paid her,” Ntunja said.

Before the lockdown she would rely on friends for food, waiting at a friend’s house until the family had a meal. Some nights she would go to bed hungry, she said. Now she and her younger sister, who is at school in Grade 12, both get the R350-a-month Covid Social Relief of Distress grant. Their parents, both pensioners in the Eastern Cape, also rely on social grants.

But her dream is to make money from professional boxing, competing in the flyweight division (49 to 51kg).

In September 2021, she won a four-round development tournament, fighting in O.R. Tambo hall in Mew Way, Khayelitsha, against a boxer from Gqeberha. And in two weeks’ time she will fight there again, against a boxer from KwaZulu-Natal - if she can find money for a kit, and if low weight does not disqualify her because of poor nutrition.

“There are a few fights which I could not attend because my weight was way too low. Even on this upcoming fight, I’m crossing fingers that I do not get disqualified because of my weight,” she said.

Her coach Andile Kilani says Ntunja is very serious about her boxing.

“She is good at what she is doing. The unfortunate part is that she lacks money to buy healthy food and a kit.”

“What I like about her is that she is working so hard changing her life. That is why I pray that she gets a good kit so that she won’t be discouraged. She is such an inspiration to other kids who are sitting at home not knowing what to do,” said Kilani.

Next:  What can you do to reduce the risk of getting an antibiotic-resistant infection?