Developing farmers marched to the provincial government on Tuesday to call for more security of tenure, more resources, and an end to corruption 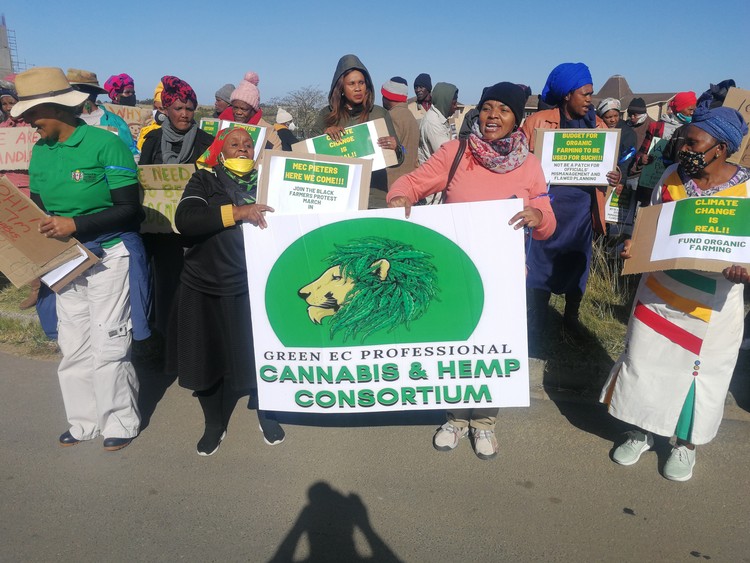 Over 50 developing farmers marched to the provincial government’s offices in Bhisho on Tuesday to demand that the government give more support to mostly black food producers. Photo: Johnnie Isaac

Developing farmers in the Eastern Cape marched to the offices of the provincial government in Bhisho to demand that the government give more support to mostly black food producers.

The farmers accuse the government of not making land available to them. Many complained of having to lease land from the government for a 30-year period before they are eligible to purchase it at market-related prices. They say that without title deeds, they will never reach large scale farming because there is no security of tenure.

The farmers handed over their petition to MEC for Rural Development and Agrarian Reform, Nonkqubela Pieters.

Farmer and march organiser, Luxolo Shushu, said, “When requests [for items like silos, tractors or storage facilities] are approved, promises are made that the department is waiting for the service provider. But years go by without any delivery. We demand to know what really happens to money spent on items that are never delivered?”

“It has also come to our attention that officials are forever seeking a stake in funds given to farmers,” he said.

Another farmer, Phumza Vitshima, said black farmers who had been growing cannabis for years are now being sidelined in the process of legalisation and commercialising the product.

She blamed the government for setting high licensing fees which they cannot afford. “Our parents and uncles lived their lives selling cannabis at the risk of being arrested because it was illegal. Now that it is being commercialised, we are being sidelined through exorbitant costs,” said Vitshima.

When accepting the group’s petition, MEC Pieters said that most of the issues raised by the farmers should be directed to the national government. He promised to respond within a week and forward relevant demands to Minister Thoko Didiza

On allegations of corruption against provincial department officials, Pieters’ spokesperson Masiza Mazizi told GroundUp that they were yet to receive specific complaints.