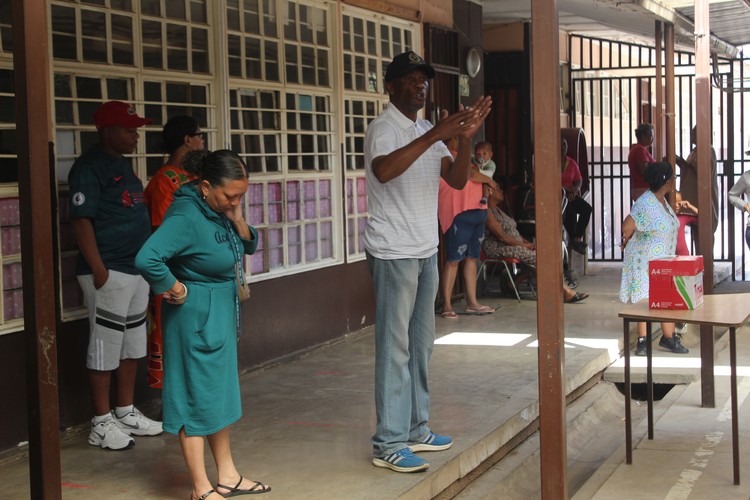 Parents at Fred Magardie Primary in Eersterust, Pretoria had halted activities at the school for nearly two weeks to get the education department to investigate their complaints. Photo: Mosima Rafapa

Classes have resumed at Fred Magardie Primary School in Eersterust, Pretoria after nearly two weeks of protests by parents and community members. They accuse the Gauteng Department of Education of turning a blind eye to allegations against the deputy principal. Parents also claim that cases of sexual harassment, corporal punishment and poor quality of education at the school have been ignored.

Earlier this month, parents blocked the entrance of the school to prevent teachers and learners from entering until officials from the district office attended to their complaints. The parents told GroundUp that the two teachers were allegedly assaulted by the deputy principal in May and July.

Parent and community leader, Godfrey Williams said in engaging the school over the alleged assault incidents, they uncovered other irregularities at the school. He said they were also concerned about the new School Governing Body (SGB) members who were co-opted by the department without the parents’ knowledge, after the suspension of an SGB chairperson in August.

“There’s no protocol to enforce discipline to learners, so teachers don’t know how to deal with our children,” said Williams.

A memorandum of demands was submitted to the school on 24 August, but Williams said no acknowledgement was received. GroundUp spoke to a few parents who said that they have lodged complaints of sexual harassment and bullying.

Gauteng education spokesperson, Steve Mabona, said the deputy principal had since been removed from the school. He said the department has committed to look into other complaints, including that of sexual harassment brought to light by parents.

However, parent committee member Ruth Mosley believes the department should have acted sooner. “The school management was made aware of the cases and it turned a blind eye. We simply had enough.”

By Tuesday this week, parents agreed to allow learning to resume at the school while the department investigates the complaints.

Next:  No explanation for why a judge has taken 19 months to rule in vital court matter

Previous:  More than 60 crèches in Dunoon struggle to register for funding