Durban residents repair flood damage, give up on government

Some suburban associations have ambitions to get “off the municipal grid” 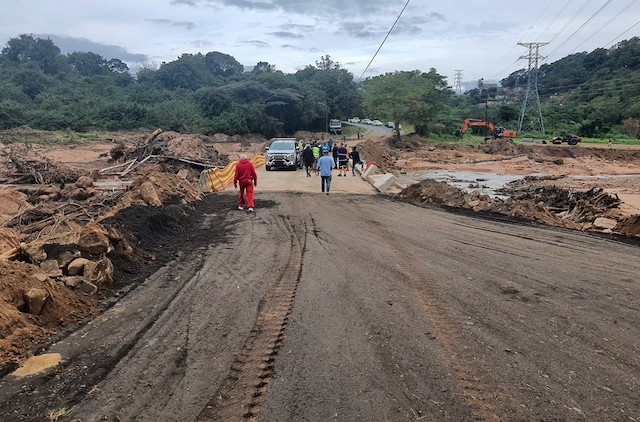 Team Pompene repaired the Hans Dettman Bridge in Northdene less than a week after residents called them to help. The repairs were done via community donations and loaning machinery. Credit: Shallcross Crime Forum

eThekwini is battling to recover in the aftermath of the April 2022 floods that came on top of the crippling July 2021 unrest. Residents we spoke to say they cannot rely on a municipality hobbled with factional political infighting. It was already failing them well before the disasters struck. Those who have the know-how and resources are forming associations to fix their infrastructure.

Marcus Richards is the spokesperson for Team Pompene, a group of ten residents from Shallcross, south of Durban, who rebuilt a bridge across the Mhlatuzana River at the Northdene border.

The Pompene bridge is a main thoroughfare connecting Shallcross to Northdene and onward to the western and eastern hubs of Durban. It is a route that serves thousands of residents daily.

After numerous requests for help went unanswered by SANRAL and the Department of Transport, Team Pompene restored the bridge without municipal assistance. They did it in just four working days and at a cost of just over R25,000.

Richards says every part of the process was documented and made open source so other communities could follow their example. As a result, Team Pompene was called in to project manage the restoration of the Hans Dettman bridge, which connects 12 suburbs in Durban. It was fixed in less than a week, again without municipal assistance.

Team Pompene’s “How To” guide on self-funded bridge repairs has assisted communities in eMdloti and La Mercy, north of Durban.

The La Mercy Residents Association struck up a private-public partnership with the SANDF to restore the M4. The eThekwini Municipality had estimated it would take six months before restoration could even begin.

Richards says their work has exposed the municipality’s inflated costs of repair and its slowness.

“Shallcross is an incredible suburb that has been left to fend for itself,” says Richards. He said residents had already secured ambulance services to respond to emergencies, rapid response security services, and food aid and disaster response teams. All the skills for these services have been in-sourced.

“If we could get ourselves off the grid, that would be a goal we would put our efforts behind,” he says.

Shallcross, Northdene and eMdloti are not the only suburbs. In Kharwastan, south of Durban, Viken Singh, who sits on the Kharwastan Community Policing Forum, learned how to crisis manage and administrate community halls after the first wave of floods.

“By the time the second floods hit, we already had resources stored safely that we turned to. Now, in the event of a future disaster, we’re more prepared to give assistance to victims,” he said.

The municipality did not respond to GroundUp’s questions.

Next:  School with long history is in appalling condition, and the education department has nothing to say about it