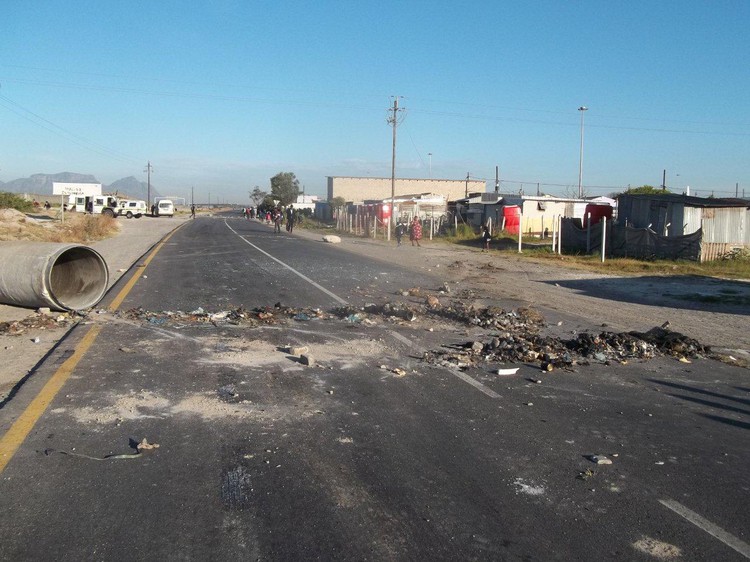 Old Faure Road in Driftsands was briefly blocked by residents protesting over their electricity which has been off since Monday. Photo: Vincent Lali

Residents of Driftsands near Mfuleni in Cape Town blocked Old Faure Road with burning tyres, stones and rubbish on Friday, demanding that Eskom restores electricity to the area.

According to members of the community, the area has been without electricity since Monday. But Eskom in a statement has blamed the outage in Driftsands on illegal connections made by the neighbouring Covid informal settlement.

Community leader Nambitha Gaya said that without working fridges, households have been forced to get rid of food that has gone off. “I bought meat for R300, but I had to throw it away as it started to rot,” she said.

Gaya said they also experienced outages last month, but the issue was resolved by Eskom. She said that street lights were not working either, making residents returning from work after dark easy targets for criminals.

Another leader, Teboho Saliwa, said electricity infrastructure in the area was installed in 1993, but it now struggles to meet the needs of the growing population which includes Los Engelos and Covid informal settlements.

“We can’t do anything without electricity. We can’t even light our homes. It’s frustrating. Newly established informal settlements get electricity illegally from the same grid. Eskom must upgrade the grid so it can supply us with enough electricity,” he said.

Khaya Bhokhwe lives with his wife and two children. “I gave all my rotting meat and mixed veggies to the dogs … The lack of electricity forces us to eat our meat now or watch it as it rot. You buy food to last you for the whole month but now we are forced to eat it in two days,” he said.

Eskom said it empathised with the community’s frustration and has been speaking to the City of Cape Town about possible solutions.