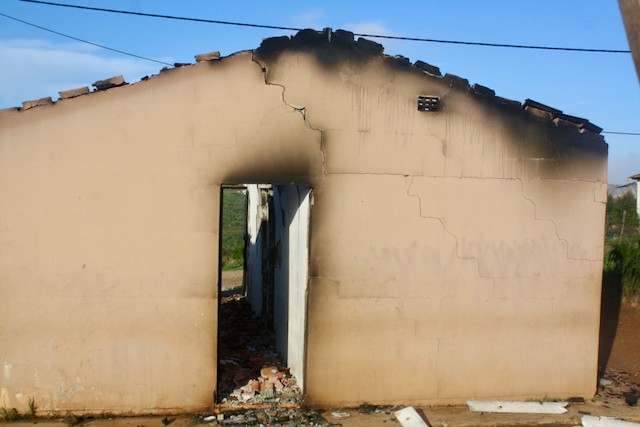 Two men were beaten, one to death, by community members in Kariega on Thursday. This house, belonging to the mother of one of the men, was also torched. Photo: Thamsanqa Mbovane

Over 100 people gathered outside the KwaNobuhle Magistrates Court in Kariega on Monday demanding the release of two men, aged 28 and 36, who allegedly tried to stop police intervening in a vigilante murder and assault.

The men face charges including public violence, assault on police officers, obstruction of justice, and damage to state property.

Swart said the two victims had been accused of theft and were severely assaulted.

GroundUp understands that they were accused of stealing a plasma TV and sound system.

When police officers attempted to take them to hospital, bricks and stones were thrown at the police and their vehicles, said Swart. “But they managed to speed off from the scene with the injured.”

Swart said one victim, aged 35, has died from his injuries.

“The name of the deceased will be released once formal identification is completed,” police said.

A case of murder was opened.

The family of the deceased refused to talk to GroundUp.

“I am still scared of the crowd who beat my son to a pulp,” said Neliswa Jonas, mother of the man still in hospital. “I was busy burying his bigger brother who died of TB when I received a call that my son was being beaten by the mob, accusing them of stealing.”

“Five minutes later, I received another call saying my RDP house was burning,” she said.

Her house in area 10, Gunguluza, is in ruins. Her son was living with her. She is currently in hiding.

Two shacks where the men had been staying were also torched even though the shacks did not belong to them.

The suspects remain in custody and will appear in court on 19 April for a bail hearing.

Previous:  Schools close at 11am in Mandela Bay because there is no water