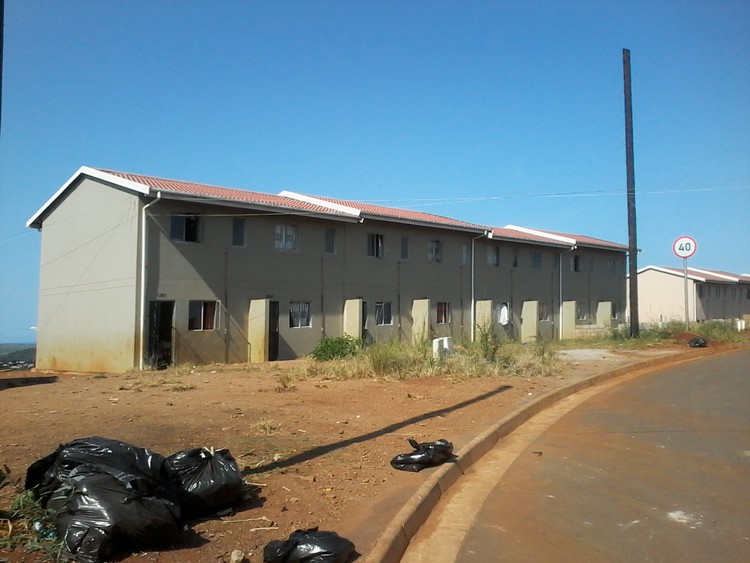 People living in a multi-million rand housing development in Tongaat, north of Durban are complaining of shoddy workmanship which has made their living conditions a nightmare. Photo: Nokulunga Majola

Families in Tongaat, north of Durban thought their lives would improve when they moved into the newly built multi-million rand Emona Sunhill housing development nearly two years ago. Now they say shoddy workmanship has made their living conditions awful.

Most of them were moved in December 2019 from Enqabeni 1 and 2 informal settlement where people complained of inadequate basic services like access to water, electricity, refuse collection and not having space for children to play. At the time, it was said the project would be completed within a year.

Resident Zodwa Mthethwa lives in an RDP flat which belongs to her mother. She said that when they first moved in, she had to sort out the plumbing because the toilet was blocked.

“I have spent over R1,000 fixing plumbing and other issues in this place,” she said.

Besides the faulty plumbing, Mthethwa said they were forced to connect electricity illegally and some of the infrastructure like the main staircase “looked like a rushed job”.

“When it rains, muddy water enters the unit … I don’t know why they moved us here when they know that there is still a lot of work to be done.

“The water truck that supplies us with water, comes every day but the water is insufficient because we have to do a lot of things like flushing the toilet, washing, cooking and bathing,” said Mthethwa.

Thabiso Maphumulo said that in the block of flats where he lives, no pipes are connected to taps or the toilet. He had to pay someone to help him with plumbing so he could use the toilet.

He also complained that the walls are cracking less than three years after they moved in. “Why were we told to move into incomplete houses?” He wants the City to say when the problems will be fixed.

When we visited last week, there were open trenches that residents claim were meant for power cables. Residents created their own illegal dump because they claim the City is not collecting refuse.

During the first phase of the development, 250 units were to be built but there are currently only 150 completed and occupied while a dozen others are still under construction. Residents say they want to know when those flats will be completed.

A member of the steering committee, who asked to remain anonymous for fear of intimidation, said contractors were hired to lay infrastructure for electricity but they haven’t been on site for two months. “They left open trenches and poles and we don’t know when they will be coming back. Residents have tried many times to address these issues with the ward councillor but she also doesn’t have answers.”

The committee member said most residents were using pit toilets at the informal settlement but it was better than having toilets without water.

Ward 61 councillor Dolly Munien acknowledged that there were issues at Emona Sunhill Housing Development. “I requested a water tanker for residents but don’t have all the answers. I have on several occasions requested the City to address these issues but to no avail.”

EThekwini Municipality spokesperson Msawakhe Mayisela acknowledged that the installation of infrastructure for water and electricity was incomplete. He said that contractors have since returned to the site and hoped to complete the job soon.

In response to complaints about refuse removal, Mayisela promised that rubbish would be collected every week. “In the meantime, we have urged residents to put their refuse on the route nearest to them for collection.

“The City’s water tankers provide water while residents are waiting for running water. We are not aware of water being insufficient but we will follow up on these concerns,” he said.

Next:  What has been granted in the Tafelberg leave to appeal?