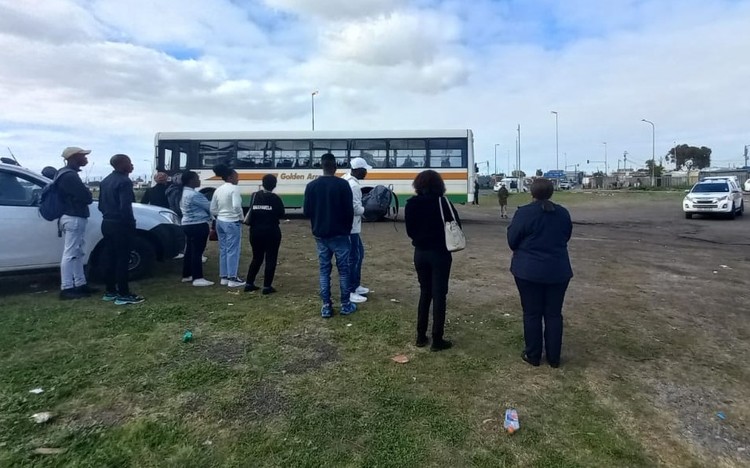 Residents from Nyanga, Phillipi and Crossroad have been forced to walk far distances to Borcherds Quarry near the N2 to take a bus to work. Photos: Siphokazi Mnyobe

Amaphela taxi drivers and the City of Cape Town are at loggerheads over the recent spate of violence that has followed the impounding of unlicensed operators across the metro.

Mayoral Committee Member for Safety and Security JP Smith says the City plans to double down and intensity operations until the violence ends. But South African National Civic Organisation (SANCO) acting secretary, Themba Dloko, who has been part of talks with the City, believes that the City is merely trying to fulfil its target of impounding 500 more vehicles.

In the last month, traffic operations by City officials in the Philippi and Nyanga area have been met violent protests by mostly amaphela (sedan) taxi drivers.

Last week, we reported that several people had been arrested for charges including public violence and a hit and run incident against an officer after about 50 of the amaphela cars had been impounded within a two week period. During the protests in Nyanga and Philippi, over a dozen buses, council-marked vehicles and police cars were set alight and pelted with stones.

Some services to the area, like the Golden Arrow buses and the City’s Dial-a-Ride service, have been also suspended until the communities are deemed safe again. Golden Arrow is currently operating from the N2 Highway under heavy guard by police and law enforcement officers.

In a bid to restore calm, SANCO leaders and police met with amaphela drivers on Friday evening at the Philippi East Police Station.

Dloko said to date that the drivers have had fruitless attempts to amicably negotiate with Smith. The drivers then asked SANCO to speak to Smith on their behalf. “Unfortunately Smith made it very clear that he would not reason with the drivers. He told us he still needs to impound more taxis and that law enforcement officers’ over-time has been approved,” said Dloko. 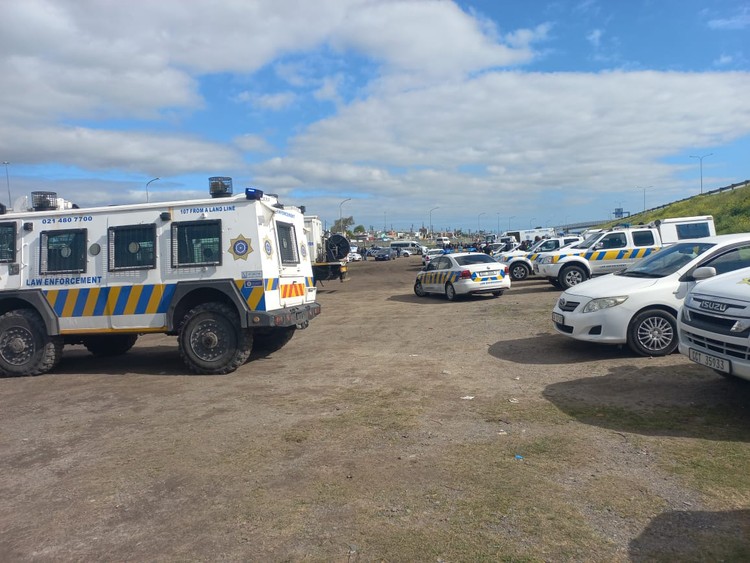 A heavy police and law enforcement presence along the N2 highway on Tuesday.

In response to this, Smith told GroundUp: “The operations will proceed with greater intensity. We’ll impound further vehicles until we’ve had a protracted period without violence, attempting to burn vehicles, and without attacks on any staff. It cannot be that through the effect of violence you exempt yourself, or you are exempted from the laws that apply to others.”

Smith said 57 amaphelas and 47 minibus taxis have to date been impounded since 4 September. An additional 31 taxi drivers were arrested for outstanding warrants for outstanding fines totalling R611,820, he said.

Asked whether law enforcement had a target to impound 500 taxis, Smith said the City would not “divulge further operational details”.

Meanwhile, there are fears that the impasse between the taxi operators and officials has turned deadly. Responding to allegations that those linked to the taxi violence have been collecting funds to contract “hitmen” to target uniformed officers, Smith in a Facebook post on Saturday noted the murders of two police officers who were shot at the intersections of Govan Mbeki and Swartklip roads in Khayelitsha on Friday.

Smith said the City is offering a reward up to R100,000 for any information that leads to an arrest and prosecution of any person involved in attacks against police or City employees or related infrastructure linked to the unrest and violence in the public transport sector.

On Tuesday, GroundUp spoke to some commuters and law enforcement officers in Nyanga. One officer, who asked not to be named, said that they come to work fearing for their lives. “These days we walk in groups in fear of being shot. I can’t cross the road alone because these drivers hide between the shacks where we do not see them,” she said.

The commuters we approached were very nervous to speak to the media. One person only said, “This needs to stop before it becomes a war.”

Cape Amalgamated Taxi Association (CATA) spokesperson Nkululeko Sityebi distanced the association from any involvement in the attacks against officers. He said the City should ask them to intervene in the impasse.

“They [the City] just come and make big moves without giving us a chance to rectify our problems. To us it means they are undermining us and don’t respect our profession. The amaphelas provides jobs to people and is a convenient means of transport in disadvantaged communities because it is cheap,” he said.

Next:  1,000 people share two toilets at this informal settlement

Previous:  Basic Income Grant: What is the debate about?