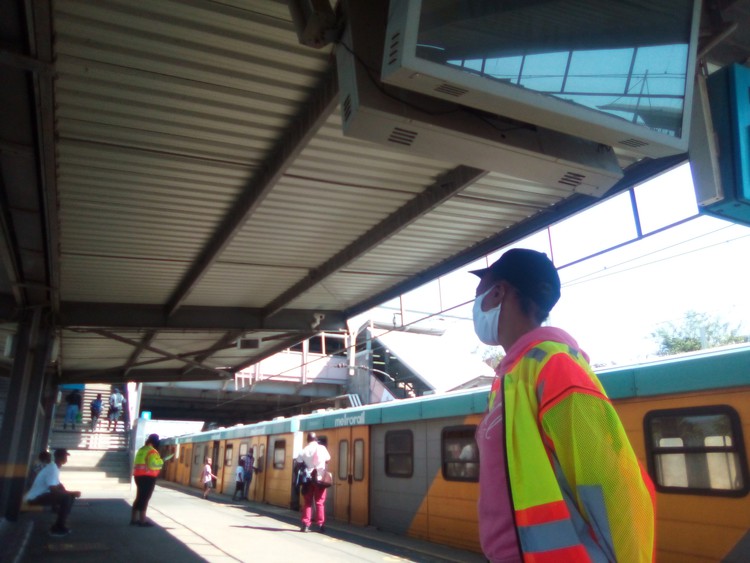 A PRASA marshall making sure commuters are wearing masks and maintaing social distancing at a station in Durban. Photo: Nokulunga Majola

Cash-strapped commuters say the resumption of some train routes in Durban has brought them some financial relief.

Trains, though riddled with issues like vandalism, dilapidated infrastructures and delays, are still the cheapest public mode of transport used by hundreds of thousands of people daily.

Rail services were suspended for months at the start of lockdown. In July, the rail agency announced that it would be phasing in services on selected routes as only 450 commuters would be allowed on a train at a time in order to maintain physical distancing.

We spoke to several people on the uMlazi to KwaMashu corridor who say they were out of pocket after having to use taxis and buses to travel to and from work during lockdown.

At the KwaMashu and Durban central stations, all Covid-19 regulations were adhered to including sanitising commuters’ hands at entry and exit points. Inside the carriages, every second seat was marked to indicate where people should sit. A marshal wearing a reflective bib monitored each carriage.

A passenger who did not want to be named said that she preferred using trains because they are less crowded than taxis. “I don’t mind that a train takes longer than a taxi because my safety counts. I am happy to see that they are adhering to the rules as the marshal kept on telling us that we should keep our masks on and social distance at all times,” said the passenger.

Mpume Mhlongo from Richmond Farm, north of Durban, said she occasionally takes a train to town to meet with her friends. “What I like about trains is that they are cheaper than taxis and they get you where you want to go. I don’t use trains everyday but when I do, I save a lot.”

Mhlongo said she cannot wait for the Stanger route to resume so she can visit her relatives. “At the moment, it is very expensive to travel with taxis. When I travel by train to Stanger I pay less than R20. By taxi it’s R110 from Durban central,” said Mhlongo.

Another commuter, Lindeka Gumede from KwaMashu said she is currently looking for a job. “With a taxi, I pay R34 for a return trip to town but with a train it’s R17.”

Since resumption of services, the Passenger Rail Agency of South Africa (PRASA) has deployed 300 marshals in the province to enforce compliance of Covid-19 regulations.

“We encountered various challenges during the lockdown when trains were not operating including cable theft and vandalism. Since resuming services on 6 July, everything has been running smoothly,” he said.

Nomnganga said: “Now that the schools have opened and more people are back at work, we are trying our best to get used to the new normal and to prevent overcrowding by encouraging people to buy weekly tickets.

He said that PRASA is appointing more security to curb theft and vandalism.

Nomnganga urged communities along its routes to assist in bringing vandals to book. “This infrastructure is ours. It belongs to the people and is very helpful to those in need. Safety is our number one priority,” he said.