“A bridge for my sweetheart”

Amos Khumalo built a footbridge for his community in Soweto 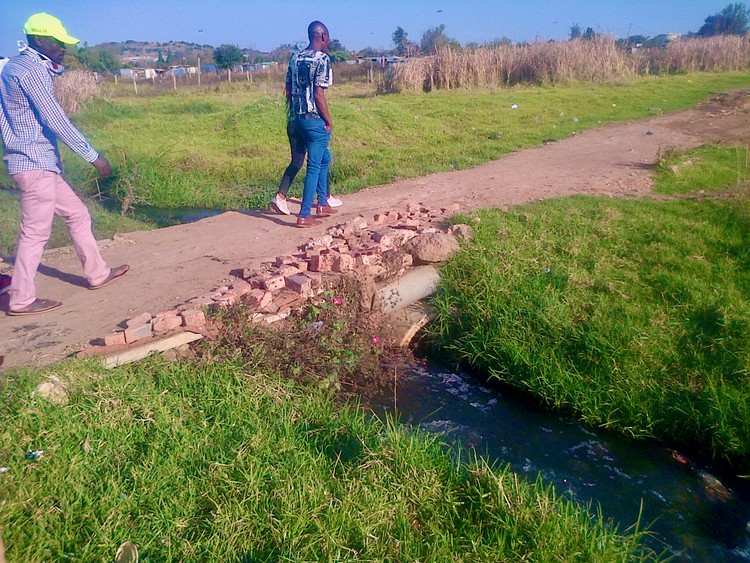 The footbridge Amos Khumalo built, unpaid and on his own initiative, after his wife injured herself crossing this stream. Photo: Mosa Damane

To take the shortest route to the shops and to school, shack dwellers of Elias Motsoaledi informal settlement in Soweto had to cross a deep gully with a polluted stream. Although only a few metres wide it could be treacherous.

In the summer rains, it was prone to flooding. People fell and had to have their broken limbs reset at nearby Chris Hani Baragwanath Hospital. Some residents also used the stream as a toilet.

Despite appeals by the community for a small bridge, no assistance came from the City of Johannesburg.

Now there is a safer crossing point, thanks to Amos Khumalo, a pensioner, who unpaid and on his own initiative, built a simple bridge.

There had been previous attempts. “They used tyres and wood, which was very dangerous,” says Khumalo. “One missed step and you were soaked in a sewage stream. My wife, Dikeledi Ntuli, was injured by those tyres after she missed a step. So last November, I took the initiative to build a bridge for my sweetheart.”

Khumalo is 63 and lives in three well-constructed shacks just metres from the stream. He was 20 when he left his home in Emkhuphane, KwaZulu-Natal, for Jozi. For four years he worked as a “daka boy”, pushing wheelbarrow loads of cement and sand and heaving bricks for bricklayers on building projects that included the HM Pitje Stadium in Mamelodi, upgrades to the UNISA complex in Pretoria, and the Grace Bible College in Soweto.

“If the bricklayer finds you slow or lazy, you’re gone, fired, bye-bye,” he says. “Every daka boy was expected to show there was life in his body.”

But young Khumalo looked and learned as he scurried around the building sites with his heavily-laden wheelbarrow. When company bosses apparently fell out among themselves, he and many others were left jobless. Khumalo started doing piecemeal work. He says his last “serious work” was when he painted the roof of Bara hospital in 2017.

“My bridge is the enter and exit of this community,” he says proudly. “Everyone uses this route – school children, workers and the community as a whole. There is no other shortcut that will take you to Bara Mall, where everybody goes for shopping.

“Crossing the stream was never a challenge for me because as a former footballer I am still flexible. But when the summer rains fill the stream it becomes a challenge for women, especially pensioners who cannot jump like young lads.”

“Miraculously, I discovered a lot of material buried under the soil when I was digging a few yards from the bridge: nine concrete beams, four steel pipes and bricks,” he says. “Three other circular pipes were left here in Motsoaledi by contractors years ago.

Khumalo’s friend and neighbour, Bulelani Bandla, helped build the bridge. When more hands are required, Khumalo hires one or two locals at R70 a day and provides meals.

“It’s a work in progress,” he explains. “I still need more bricks, soil and cement to make it strong for the rainy season. For now, I’m going to put old carpets on top of the bricks that I’ve paved on the bridge before I pour some soil on top.”

“I wish I had ten bags of PPC cement and access to the tools I need, so I can complete the job,” he says.

His “sweetheart”, Dikeledi Ntuli, says, “I got injured trying to cross the stream on my way to Bara taxi rank. I twisted an ankle and fell into the stream. I screamed for help and my husband came quickly from the shack to rescue me. I still feel the pain in the mornings when it is cold, but I am fine. My husband is very active. He made sure that I won’t get injured anymore by building the bridge, which is also useful for the community as a whole. He is a good man indeed.”

“I decided to help building the bridge because I know how it feels to fight for your life in a sewage stream,” says Bandla. He nearly drowned trying to cross it in 2014. “It was raining and the grass was wet. I slipped but managed to grab the weeds on the edge of the stream and pull myself out.”

A father of five adult children from previous marriage, Khumalo set up home in 1999, building three shacks with old silver sheets, now brown from sun and rain. Four tyres help to hold the roof down and there is a kraal for livestock.

After his 2017 retirement, he established and is coach of the Khumalo City Fighters FC, with teams for under 13s and seniors. He used to be striker for Rovers FC in Soweto. With the help of Bandla, he built a pitch in the settlement. “We trimmed 120 yards of ground and today have a pitch which is always packed with fans every time we have a match,” he says.

Bandla has his own football team, Charmer Boys FC, too, and the players cross Khumalo’s bridge on their way to play league games in Orlando.

Lina Mondlane, 67, lives with eight of her 17 grandchildren in a three-room shack. Her children use Khumalo’s bridge to get to school. She recalls the day she broke her leg trying to cross the stream. “I have been crossing this stream for 36 years, and in May 2019 I was on my way to Shoprite to buy groceries for my grandchildren. I jumped as usual, missed a step and fell into the stream. I limped back to my shack thinking I’d just twisted an ankle, but the leg was already swollen and the pain was unbearable. I went to Bara hospital where the doctor told me my leg was broken in two places.”

Another resident, Asanda Mava, says, “I salute the old man [Khumalo] with his shovelling tools and skills. We tried to fix the bridge with wood and tyres, but we failed. Baba Khumalo took over and now it looks good.”

“Last year I’d be stuck, not knowing where to cross. Now I can go to Power Park and visit my friends even when it’s raining. I like what Baba Khumalo is doing for the community. No one is paying him for all the work he does and I have never heard him ask for donations. He’s hands-on even in sports and he is the one who maintains his football pitch for games on weekends.”

Khumalo says ward councillor Lady Grace Badi (ANC) “knows our challenges, because before she became a councillor she was crossing the same stream. But now she doesn’t have to cross it anymore and she is not interested”.

Asked for comment, Badi, said: “Hey bhuti, ungazongigibela! (Hey brother, don’t ride me!) … I don’t speak to the media. All I want to know is how did you get that information about my ward?”