Battle of the bakkie: Ouma Katrina Esau’s vehicle at the centre of a DA-ANC row 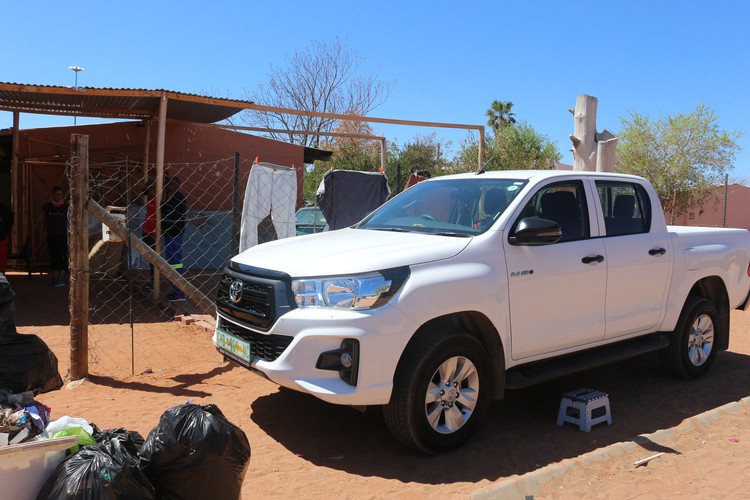 The bakkie donated by Premier Zamani Saul to Ouma Katrina Esau, the last surviving speaker of the Nuu! language, in front of her home in Rosedale, Upington, in August. Photo: Selby Nomnganga

A bakkie donated by the Northern Cape Premier to the last surviving speaker of the Nuu! language, Ouma Katrina Esau, was at the centre of a fierce political battle during voter registration weekend in Upington.

The bakkie was donated in August by Premier Zamani Saul for Esau’s Nuu! language classes.

But after the voter registration weekend of 18 to 19 September, ANC councillor Maryna Basson, who is Speaker of the ZF Mgcawu municipality, “repossessed” the bakkie. She said that according to a Whatsapp message from the ANC branch election team coordinator, the bakkie had been used to “transport opposition members”.

Hearing about this “via the grapevine”, Deshi Ngxanga, provincial ANC secretary, instructed the district secretary to take disciplinary action against the Speaker.

Ouma Katrina, designated a “living legend” by the Department of Arts and Culture, is the only surviving speaker of the Nuu! language after the death of her brother in June. Her classes are aimed at preserving the language by teaching it to children. Following the publication of her story book Ostrich and Tortoise, Saul donated the bakkie for her project to use.

In a phone interview, on behalf of Ouma Katrina Esau as Queen of the House of N||ǂe (House of the People), the head of administration, Igshaan Sulliman, told GroundUp that Esau’s son-in-law Ryan Snyman had been using the vehicle. Snyman is a ward candidate for the DA.

The district municipality had been asked to keep the vehicle over the weekend as it “was not safe” at Esau’s house, but Snyman had not been told, and when the municipal staff came “there was a quarrel”, said Sulliman.

It was all “a misunderstanding”, said Sulliman.

The bakkie had never been used for DA political work, he said.

But Ngxanga told GroundUp that he had “jumped the gun” by asking district secretary David Kazi to take action against the Speaker. “I should have verified the facts before writing the letter [to Kazi],” he said.

But Kazi said the matter had not been finalised. The Speaker had been asked to make a statement at the police station and the statement would be sent to Ngxanga for a decision. According to Kazi, the Speaker took the bakkie because she saw it “was used for political purposes”.

GroundUp asked the spokesperson for the Premier, Bronwyn Thomas-Abrahams, why the Premier had donated a bakkie to Esau, who had bought the bakkie, in whose name it was registered, and what if any were the conditions for the donation. We also asked if any action would be taken. She told GroundUp: “Kindly refer your query to Ouma Katrina Esau”.

DA district leader Flip van der Steen could not be reached for comment.