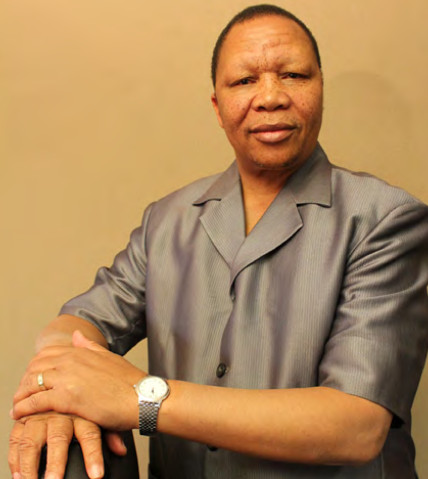 Alfred Nevhutanda is the former chairperson of the National Lotteries Commission. Photo copied for fair use from an annual report of the Lottery

It takes at least a decade of research and teaching, sometimes two or three, to become a professor in a reputable university.

Not so for “Professor” Alfred Nevhutanda, the former National Lotteries Commission board chairperson. He has used the honorific “professor” since receiving an “honorary professorship diploma” from Azerbaijan’s International Eco Energy Academy (IEEA) in 2007.

He referred to himself as a “Professor in Environmental Science” during his 2009 interview before the Parliamentary Committee for Trade, Industry, and Competition, after which he was appointed to the National Lotteries Board.

Asked by GroundUp to provide details of a track record that would justify receiving an honorary professorship, Nevhutanda responded via email: “mine is an ‘honorary’ professorship diploma and not a degree”.

Nevhutanda holds a PhD in Arts Education and has some teaching experience at a Limpopo college. But his honorary professorship was awarded in the field of energy development, a field in which he has no academic background.

Nevhutanda was active in several coal and energy companies and presented a paper to the IEEA in 2007. But in 2012, AmaBhungane reported that the paper had been plagiarised. (Nevhutanda’s spokesperson disputed the allegation in the AmaBhungane report.)

“Even people who don’t have any formal education are awarded such qualifications, sometimes based on the work they’re doing for the community. Once they’re awarded, it is legally their qualifications,” Nevhutanda wrote in a second email to GroundUp.

But the IEEA is not accredited as an academic institution with any reputable authority.

The IEEA’s president Fagan Aliyev calls himself a “professor” of Oxford University. But he received an honorary professorship from Academic Union, Oxford, an institution which allegedly sells fake degrees and awards to academics and businessmen at high prices.

Farhad Aliyev, the Vice President of the IEEA, received his PhD from Atlantic International University, accredited only by the Accreditation Service for International Colleges, which is not recognised as a legitimate accreditation.

The IEEA’s website claims that the organisation conducts research projects on sustainable energy development. It also advertises distance-learning degrees up to doctoral level, but does not advertise any accreditation.

Professors are usually appointed to an institution when candidates display an impressive track record of expertise and contribution to the institution.

Honorary professorships do exist but are only awarded by South African universities under very specific circumstances. The University of Cape Town, for example, awards honorary professorships to “distinguished people” who are either senior members of an institution associated with the university or who contribute significantly to the university through their “achievement and distinction in professional activities”.

According to UCT media liaison Elijah Moholola, no specific duties are required from honorary professors, but they must make a continued contribution to the university by being a member of an institution closely affiliated with UCT, or by teaching or conducting professional activities that add to the prestige and scholarship of the university.

In some cases, however, the appointment expires after a specified period, usually five years, after which it will be renewed.

Elsewhere in the world, honorary professors are often required to make continued contributions to the institution, usually through lectures, seminars, or supervision of PhD candidates. In the UK, appointments are made for a fixed term, usually three years, and renewal is possible. But Nevhutanda’s award was a once-off as far as we can ascertain.

Nireen Naidoo, Executive for Governance, People and Strategy at the South African Qualifications Authority, told GroundUp that honorary awards “are not recognised outside of the institution that awarded the title”. She said an honorary award “may only be used within the context of that institution, for example during their graduation ceremonies or when giving a guest lecture at that institution. It has no currency outside of the institution and may therefore not be used in the general context.”

Nevhutanda declined to comment on our questions about IEEA’s legitimacy. The IEEA could not be reached for comment.

Nevhutanda’s tenure at the National Lotteries Commission has been riddled with scandals. GroundUp recently reported how Nevhutanda used lottery funds, funnelled through lottery grantees, to help pay for a R27-million mansion. An organisation that employed his daughter received R41-million in lottery funding.

Nevhutanda has denied allegations of corruption. 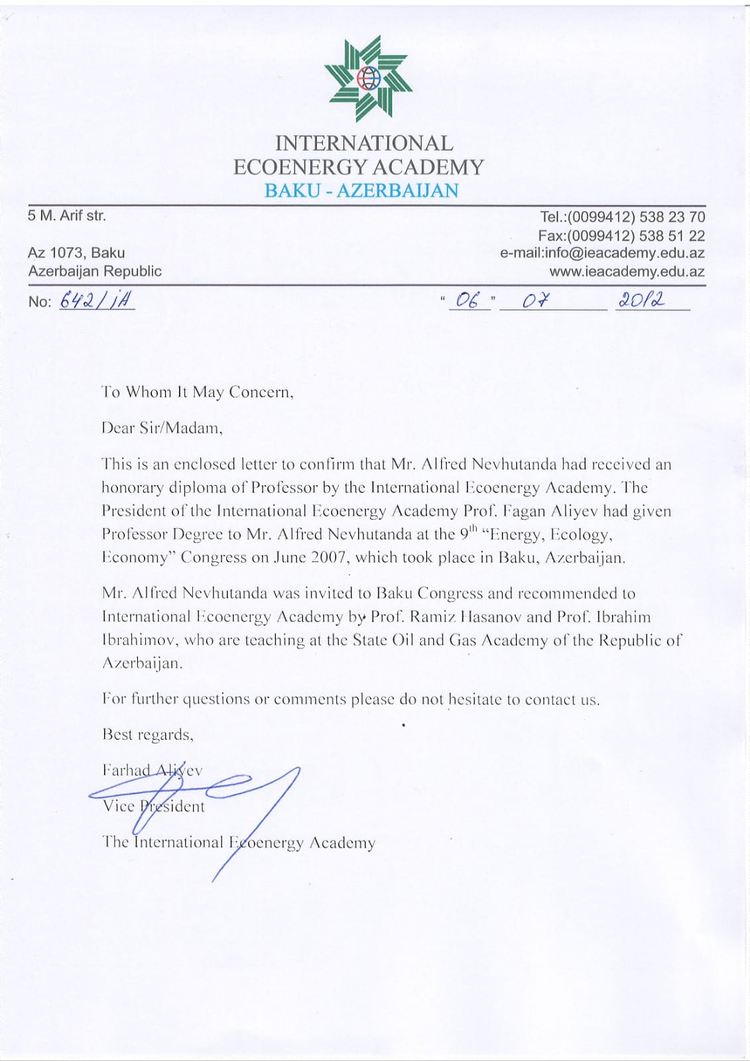 The letter appointing Nevhutanda a professor. Nevhutanda emailed this to us.

Next:  Shambolic Home Affairs leaves immigrants who are legally in the country undocumented