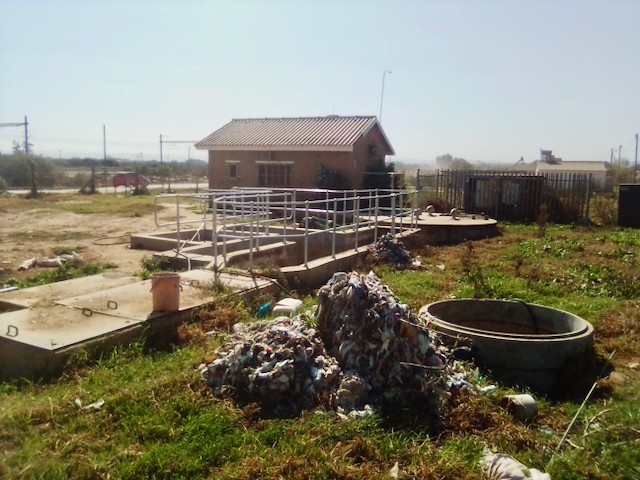 Objects flushed into the sewers that clog the system stand in heaps at the pump station in Valencia, Addo. Photo: Joseph Chirume

Residents of Addo in the Eastern Cape say sewage pooling in their yards and running down their streets has become normal. They accuse the Sundays River Valley Municipality of failing to find a solution to the problem. Residents say the sewer pump station in Valencia keeps breaking down.

“Most streets in Valencia have been covered in raw sewage for the past four months,” says Siphosethu Fanapi from Greenfield, who lives near the pump station.

“We are used to hopping and jumping when walking in the streets to avoid stepping on effluent. The reaction by the municipality is very poor. They don’t even pour disinfectants and this poses a health hazard to residents.”

Sewage is flowing into the Sundays River and there is a heavy stench. Sewage from the pump station has dammed up metres from the R335 road and flows into the river. Concerned residents fear that the Sundays River could end up being badly polluted. Many people who live downstream use the water. There are also cattle herders and fishermen in Colchester who depend on the river.

“It seems the pump station is cursed, because it has never worked properly since I came to stay here three years ago. It is always breaking down,” says Monique Swartbooi. “There are times municipal employees work at the pump station but the problem still persists.

“Several meetings and engagements have taken place between residents and officials, where grievances concerning the sewage in the area were raised. The municipality has just failed to address our concerns. It seems our complaints are falling on deaf ears.”

But Sundays River Valley Municipality spokesperson Zusiphe Mtirara said, “The challenge is that the pump station was designed for a very small population but over the years the number of people living there has grown … creating more demand and pressure on the pumps and decreasing their lifespan.”

“The influx of many people [seasonal workers] into the municipal area during the citrus harvesting season has also put extreme pressure on our systems, which has led to more challenges.”

Mtirara also blamed the theft of electricity cables and residents of disposing of objects down their toilets that clog the system.

“We are in a process of upgrading the pump station to be a Waste Water Treatment Works, which will be able to cater for the community and surrounding areas. Consultants have already been appointed and have started with their work. Once all work is done, these issues will be a thing of the past,” said Mtirara.