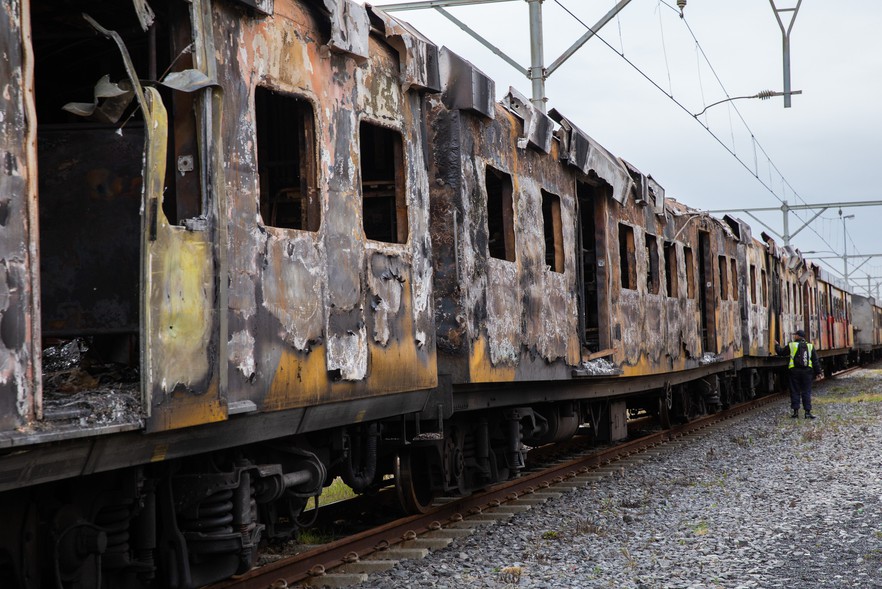 Burnt out train at the Paarden Eilend Depot in Cape Town. Corruption at PRASA has almost destroyed commuter rail in the city. Archive photo: Ashraf Hendricks

Martha Ngoye is a whistleblower for the vast corruption at the Passenger Rail Agency of South Africa (PRASA). She is PRASA’s group executive for legal, currently suspended pending the outcome of a disciplinary hearing.

Her actions, along with a few other colleagues, have saved the commuter rail agency billions of rands.

She led the fight against the corrupt Swifambo and Siyangena contracts; helped stop PRASA from making a R1-billion ‘investment’ in VBS, months before its collapse; and prevented PRASA from making illegitimate payments to Siyaya, owned by the notorious Makhensa Mabunda, among other things.

Her testimony at the Zondo Commission revealed in detail the autocratic style of ex-PRASA CEO Lucky Montana, and the insidious influence that Roy Moodley had over the rail agency. In return, PRASA, under Chairperson Leonard Ramatlakane, fired her, illegally, and used the bottomless coffers afforded by the state to drive her from her position and sue her for R45-million.

In this article, Ngoye discusses state capture in the context of the murder of another whistleblower, Babita Deokaran.

Nobel Prize laureate, Rigoberta Menchú Tum, in the 2001 edition of the Global Corruption Report, said: “Without strong watchdog institutions, impunity becomes the very foundation upon which systems of corruption are built.”

Recently there has been a sliver of good news to those of us who fight corruption:

The news is bitter-sweet because it pits the woefully lethargic and seemingly hapless South African authorities against the Spanish and English authorities. The victim of the crimes allegedly committed by Mabunda and Bain is the South African state. Yet the state is still to arrive at a point where it even openly labels the alleged perpetrators of these crimes as ‘suspects’. On the contrary, there has been a concerning emerging closeness by organised business and government to Bain. And the media has reported that Mabunda is so loaded that the value of his kitchen cabinets can build many RDP houses.

I believe that the banning of Bain by the UK government would probably have pleased Babita Deokaran because it would have been an example of the consultants that aided and abetted state capture experiencing some justice.

Often when the masters of state capture are exposed, there is much less light on the consultants at companies like Bain who facilitated their corruption, and the eye-watering fees they received. To clear their names they simply voluntarily pay back fees earned from state capture and continue to earn more fees from ongoing business.

The problem with this was aptly explained by Babita: “Every few years, we have a different team of people who come in and loot, and the funds seem to be a bottomless pit.”

This is a typical way they operate to silence whistleblowers:

• They do a hatchet job of placing documents together that do not go together and call that an investigation.

After the murder of Babita, the Premier of Gauteng promised that there will be justice for Babita. When I shared a tribute to her after her death, I stated that unfortunately there would be no justice for people right under the Premier’s nose even though they are are the easiest to find, because they are untouchable. The evidence of their actions against Babita is in easily available memos, in charge sheets and documents showing Babita’s removal from positions where she was seen to have too much information; and in invoices for services rendered and in her harassment.

Justice for Babita should have started with the people who harassed her at the Gauteng health department. These people still enjoy secure jobs because they remain useful.

The useful bureaucrats who assist the state capture masterminds are everywhere. They are neatly nestled in their cushy jobs. I have sat across tables and faced them. They are never touched. They are simply rinsed and repeated in other entities. They hardly ever get mentioned in newspapers.

Justice for Babita requires that they are named, fairly dealt with, and shamed.

Every few years, a different team of looters are deployed to different public institutions. Although the funds that they loot and help to loot seem like they are endless, they are not. The looting means our country’s debt is increased, the most vulnerable are robbed of services, our collective pride in our country wanes, and our children have less money to run this country.

There are of course many exceptions to these corrupt bureaucrats. Athol Williams, who dedicated his life to assisting Lord Peter Hain to ensure that there were consequences for Bain, had to exile himself so that he could do his work safely. He has become a modern-day leper. The public sector and the private sector agree to refuse to touch him because he is honest and not capable of being compromised. This country owes him a great debt of gratitude.

The countervailing force to the looters are people like Babita and Athol. We are fortunate to still have others like them in our country and in our institutions. As we remember Babita’s murder, we are encouraged to carry on, to fight on, to not be afraid.

We remember Babita. This Land is Ours, the looters shall not win!

Next:  Teenager electrocuted in Gqeberha river