“I just feel sorry for them. I wonder how they sleep after what they did,” says Regan’s father 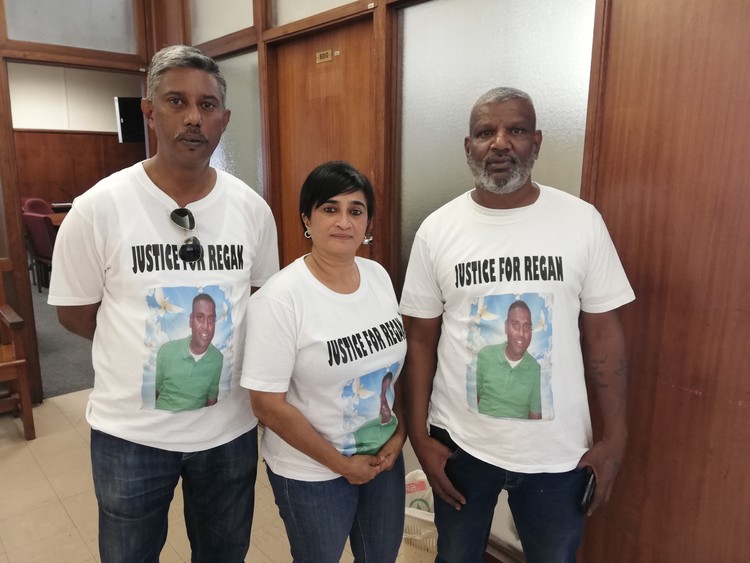 The family of Regan Naidoo wore matching t-shirts with his face printed on the front as they faced 22 police officers in court for his death.

Naidoo, 32, was picked up with two of his friends on 28 August 2018 by officers attached to the Durban K9 Unit, Chatsworth Trio Crime, Durban Flying Squad and provincial Organised Crime Units. It is believed that he was being held for questioning in connection with an unlicensed firearm that was used in a local crime.

Naidoo later collapsed at the Chatsworth police station in the early hours of the morning. He was rushed to hospital but was declared dead on arrival.

On Thursday, 22 police officers, aged between 29 and 54, appeared at the Durban Magistrates Court. Their charges include murder, attempted murder, kidnapping and torture.

Prosecutor Surekha Marimuthu was granted a postponement to 3 November, pending a request for “further particulars of one of the accused”.

Naidoo’s widow, his father Timothy Naidoo, and his aunt and uncle, Ruby and Jeffery Mahalingan, came to the hearing.

Outside court, Timothy Naidoo told GroundUp that police had told them that his son died after choking on a pie. However, this was in conflict with an autopsy report on his son’s injuries.

Determined to get justice for his son, Naidoo said that he relentlessly pursued action from IPID. “It has been a tough journey but thanks to [IPID] and the prosecutors, this case came to light.”

“I have no hatred for [the arrested police officers] … I just feel sorry for them. I wonder how they sleep after what they did. They have families, [wives] and children. If they go to prison how will their families be supported?”.

Naidoo said his son’s death has changed his life and made him a better person. “l have come to value my family and not take life for granted,” he said.

The case is expected to return to court next month.