The student activist who gaslit workers and cost them their jobs 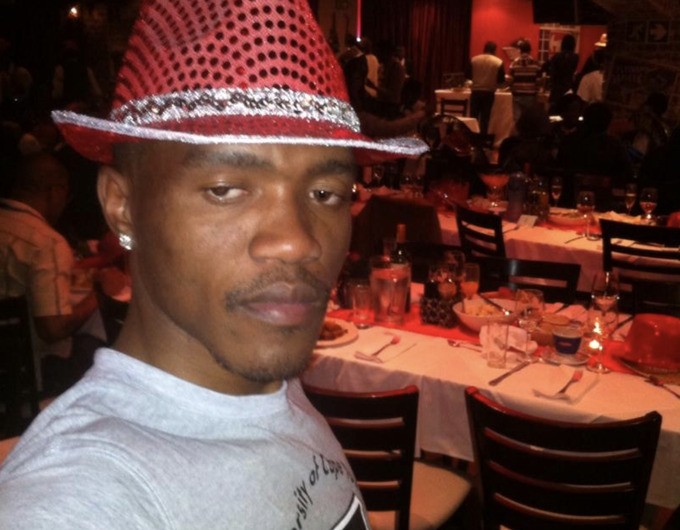 In July this year, 31 security guards that disturbed a June exam at the University of Cape Town (UCT) were fired by the security company that employed them. But behind this action, footage of which was widely shared on social media, is a story of outrageous deception.

The guards, who worked for a security company contracted by UCT and were asking to be insourced by the university, were following the advice of a former student activist Sibusiso Mpendulo, 37. Now, they are asking this university to forgive them and to be insourced, saying that they were deceived.

Worker leader Amos Qwabi said he and 30 other security guards were misled and manipulated for years by Mpendulo, who claimed to be a lawyer, took thousands of rands from them, gave them fabricated court order papers and repeatedly lied to them, and ultimately led them into a ruinous strike that led to them losing their jobs.

Now the workers are asking the university to forgive them for the disruption, and for making the mistake of placing their trust in Mpendulo.

Asking to be insourced

Qwabi told GroundUp that this group of security guards have had a long struggle to be recognised as university employees, dating back to 2015, when the #FeesMustFall protests took hold at the campus. Some have guarded the university for over a decade.

At the time, one of the major demands of the protests was that university workers, including security guards, should be insourced.

In June 2016, then Vice-Chancellor Max Price announced that UCT would welcome about 1,000 insourced employees in July 2016. But about 50 guards who patrolled the university campus and who worked for Securitas and the Groote Schuur Community Improvement District (GSCID) were not among those hired.

Qwabi told GroundUp that they applied twice to be insourced, in 2016 and again in 2019, but did not succeed. He said that UCT did not explain to them why their applications failed.

“All we want is to be insourced so we can receive the same benefits enjoyed by other workers who are working for UCT.” He said they do the same job but earn much less. The insourced workers also get benefits like medical aid.

Then in 2019, the group of guards met Mpendulo at a protest. They were enticed by his activist credentials. He offered to assist the workers.

“He told us that he is a lawyer and assured us that we will win this case against UCT,” he said.

Mpendulo has a bit of a record at UCT. In 2016, GroundUp reported on a “mini-protest” by Mpendulo and his “bodyguard”, in which he blocked an on-ramp to the university in a protest for workers to be insourced. Mpendulo kept on engaging in a number of disruptions, including a shutdown of the library in 2017.

Qwabi said at first Mpendulo told them that he would take their matter to the CCMA.

“I don’t know what happened at the CCMA since Mpendulo used to attend meetings alone,” he said. Then he said he was taking the matter to the Western Cape High Court.

“The process took long but we trusted him. He would go alone to court. We didn’t have a problem with that as we believed that he was helping us,” he said.

Mpendulo would meet with the guards, and tell them that he was acting for them in court. He “went to court” at least four times in 2019, and a number of times in later years. Each time, he would take R100 from each of the 31 workers.

In 2020, Covid meant that the case quietened. But Qwabi said Mpendulo came back in 2021, saying he was taking the matter back to the Western Cape High Court.

Then early this year he came to the workers with outstanding news – the workers had won the case and now UCT had no other option than to hire them.

In a 20 September letter written by the security workers to UCT, they asked the university staff, management and students to forgive them for the disruption they caused in May when they engaged in a strike action to be insourced by UCT.

Mpendulo came to the workers in May saying that the university was not complying with a court order against them, and that he had a plan to get the university to comply with the order and insource them.

After a meeting, Mpendulo told the workers to follow him into the examination halls as he disrupted the June university exams.

The disruption was widely covered in the news at the time. But reports did not get to the bottom of the story.

In this video, Mpendulo can be seen throwing papers around. He is incorrectly identified as a member of the Economic Freedom Fighters’ Student Command, and the guards are ambling down the aisles. They did not throw papers about.

Securitas and GSCID, the workers’ employers, called them in for disciplinary hearings after the unlawful strike.

Mpendulo’s advice to the worker was that they should not attend the hearings, saying that they had a right to embark on a strike.

They listened to him. The workers were sacked.

Mpendulo was later arrested for trespassing and malicious damage to property but charges were dismissed in court.

Mpendulo did not deny this when called by GroundUp. He said that he has the court order but that UCT is refusing to implement it. He said he has since taken the matter to the Hawks. 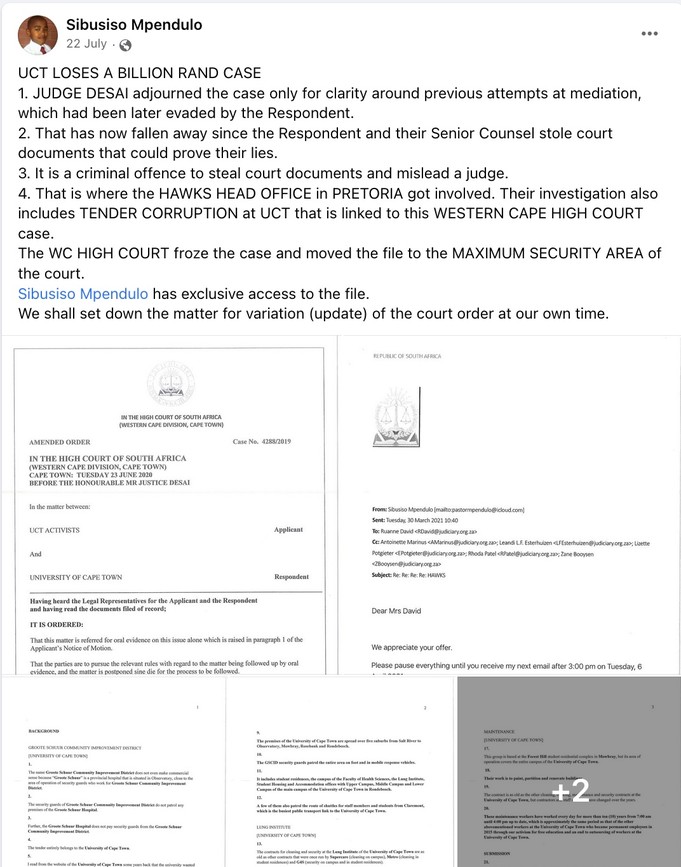 His statement makes no sense: he cannot have “exclusive access” to a public document.

But to workers, unfamiliar with court machinations and styles, these papers passed as legitimate – the order was stamped and appeared to use court stationery.

But this is a forged order. Read it here. 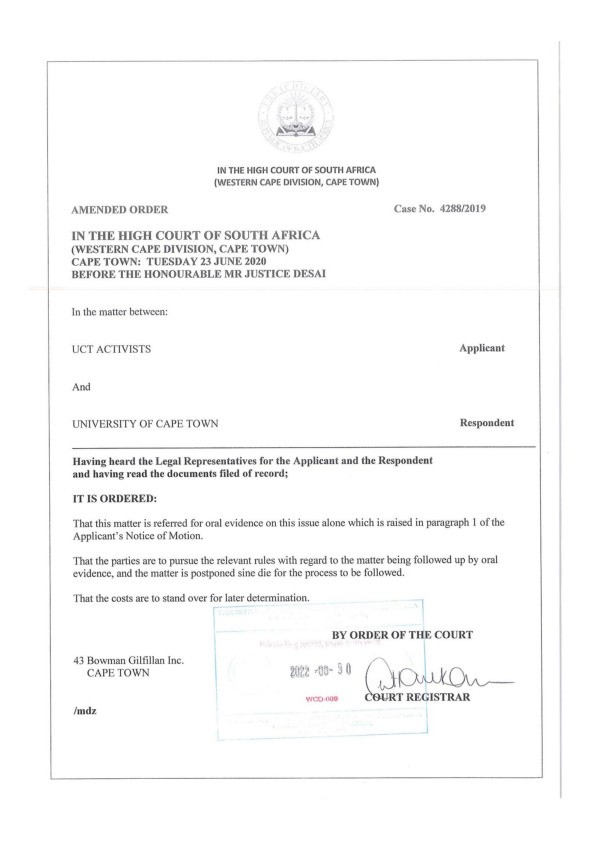 The front page of the forged court order.

For one, there is no actual order that follows the words “It is ordered”. Instead, gobbledygook:

“That this matter is referred for oral evidence on this issue alone which is raised in paragraph 1 of the Applicant’s Notice of Motion.

“That the parties are to pursue the relevant rules with regard to the matter being followed up by oral evidence, and the matter is postponed sine die for the process to be followed.”

The stationery is irregular – orders do not contain the emblem of the court. And, for some reason, Bowman Gilfillan is mentioned on the first page.

A court order would also be marked with an “X” and would be initialled by the judge.

Judge Desai told GroundUp that he has no recollection of this matter, and would need the court file to determine what transpired in court or in his chambers.

“He messed up our lives”

Qwabi said Mpendulo brought nothing but more trouble into their lives after they trusted him. UCT failed them after they worked to keep the university and its people safe for years, said Qwabi, but Mpendulo made things much worse.

Qwabi said this fight made them targets at work. As a result, he was no longer happy and resigned earlier this year. But he continued supporting the motion that he and his colleagues should be insourced.

Qwabi said that when Mpendulo showed them the “court order” they were “so happy”. He said: “We didn’t even know that they were fake until recently. By then all the striking workers were out of their jobs.”

“We believed him but he messed up our lives,” said Qwabi.

Despite the “order” being a forgery, Mpendulo insists that it is real, and he insists that the Hawks are investigating UCT for not following it. He would not give GroundUp the case number, and he threatened to report GroundUp to the Hawks if we “saved” the order.

But things get curious here.

Qwabi said that, after Mpendulo told the workers that he had taken the matter to the Hawks, he received a call from a detective by the name of “Tsiya” who asked to meet him in Cape Town Central police station for a statement. Qwabi told GroundUp that he met Tsiya and another man in an office at the police station who claimed that they were from the Hawks. Mpendulo told us the same story.

Since his statement was taken Qwabi has not received any feedback from Tsiya. “I called him a few weeks ago. He said he will update me in November when he is back in Cape Town,” he said.

GroundUp contacted detective “Tsiya”, who said he works for the Hawks and that he is aware of the case. When we asked what exactly he was investigating, he said he was busy in court and he dropped the call.

Qwabi told GroundUp that Mpendulo went quiet after the workers lost their jobs. UCT was not insourcing them, per the “order”. They realised something was very wrong.

Desperate, they approached the People’s Law team, a Cape Town law advice clinic based at Bertha House. Through People’s Law, they found out that the papers were forged, and that they had been grossly misadvised.

“We had a meeting with the People’s Law and Mpendulo was part of it. When he was asked about the forged court order he got angry and marched out shouting. He told us that we must choose between the People’s Law team and him. He made this whole thing about him, not about us. Since then he dropped us,” he said.

Qwabi said People’s Law helped the workers uncover their deception, and helped them write to the university. They have petitioned UCT to reinstate and insource the striking UCT security guards by the end of October.

Responding to the allegations, Mpendulo said there are “unions” who are bought by UCT and they are trying to destabilise them. He said these “unions” are using his court papers he posted on his Facebook page and what they are doing is not right. He has reported them to the Hawks, who, he says, are investigating the UCT case against the dismissed workers.

Questions sent to the Hawks and UCT were not answered by time of publication, but answers will be added as they arrive.

Next:  There’s nothing here to vandalise, Dunoon residents tell officials on anti-vandalism drive

Previous:  Municipalities must play their role in early childhood development