Before he arrived at the Anthony Harris Tennis Academy in 2016, Mikaeel Woodman learned to play with his father at the Mitchells Plain Tennis Club. There the courts have no facilities, no toilets, and no clubhouse. Residents drive their cars up to fences and turn on the headlights to allow for play after dark. Within three years of picking up his first racquet, Woodman would be an internationally ranked player with a promising future in the game.

“Tennis has never been the most popular sport in South Africa,” said Dionne Harris. “But by identifying youth with real talent and potential, we’ve created a new path that wasn’t available to them before.”

She is co-founder of the Tennis Academy and wife of now-retired tennis professional Anthony Harris. Anthony is the coach of Lloyd Harris (no relation) the number 112 in the world and the second-highest ranking South African behind Kevin Anderson.

The Anthony Harris Tennis Academy was founded in 2012 as a high-performance training academy for young South Africans looking to play tennis professionally. In 2013, Dionne and Anthony purchased the facility in Sea Point that would become the Academy’s home.

Lloyd Harris is their most successful former pupil.

Anthony based the training program at the Academy on the Rafa Nadal Academy in Spain. Here in Cape Town, pupils have a rigorous training schedule five days a week, playing tennis for two hours in the morning and two hours in the afternoon, with an additional hour of conditioning during both sessions. Most full-day pupils are home-schooled to keep them focused on improving their skills.

The Make a Tennis Champion Foundation (MATCH) was launched in 2015 by the Academy and benefactor Anthula Markovitz to provide scholarships for students like Woodman whose families cannot afford the expenses that come with pursuing a tennis career.

“Anthony and I came from Zimbabwe, where we saw the wealthy, white, sort of colonial tennis clubs keeping out anyone who couldn’t pay,” said Dionne. “It eventually inspired him to give an opportunity to kids who, with a little help, could someday become tennis champions themselves.”

While living in Zimbabwe, Anthony created a tennis camp outside of Harare that was focused on disadvantaged youth. The Cape Town academy expands on this idea.

As coaches and trainers, Anthony had seen dozens of youth in the Cape Town area with the talent and passion for tennis but not the means to pursue the sport. After the MATCH Foundation began, he started to recruit as many as they could afford.

“It was exceptionally difficult at first,” said Dionne. “People were hesitant to fund something like kids playing tennis when there might be so many other pressing problems in South Africa, let alone more popular sports like cricket and football.”

Money was tight, Harris explained, as they tried to transport pupils not just from their homes in the Cape Flats to Sea Point, but also to tournaments, many of which are located thousands of kilometres from Cape Town.

“Getting to see different parts of the world, meeting people from all sorts of countries I think has been very valuable to me,” said Robbie Arrends, a 17-year-old MATCH pupil now ranked 177th in the world for juniors. In 2019 he traveled as far as Tunisia to compete against the future professionals of the tennis world. He has won 11 titles, three singles and eight doubles, since January.

“I’ve remained friends with many of the people I’ve met at tournaments,” he said. Many of them he has known since he was an under-10 player.

In recent years, the MATCH Foundation has seen more financial security after large contributions from private donors who have seen the impact the Foundation has had on pupils’ lives. 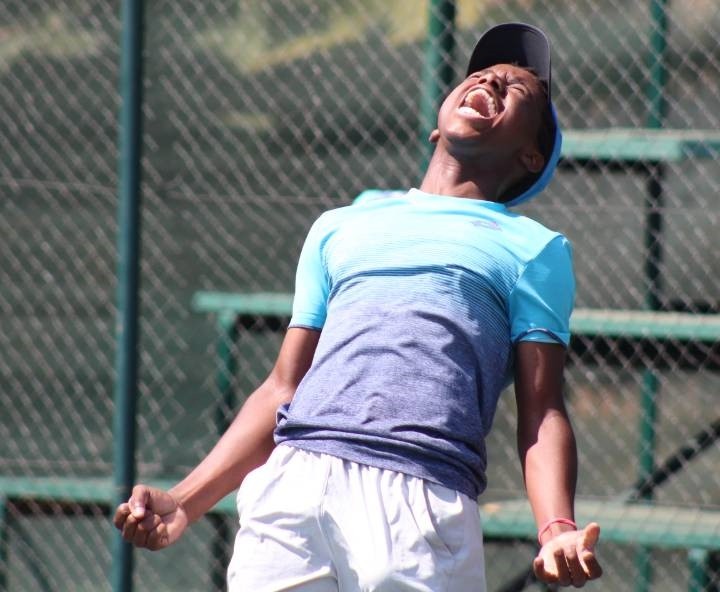 Khololwam Montsi is on a 28 match winning streak. Photo courtesy of the Academy

Anthony and Dionne and the other coaches who work at the Academy work to make sure the MATCH pupils feel like they are equal and as capable as their paying counterparts in every way. Financial pressure, Dionne said, leads to a lack of confidence on the biggest stages, where money can be won or lost based on a player’s performance.

The Academy pushes pupils to set realistic but high-performance goals. Woodman, currently ranked 749th, hopes to reach the top 100 juniors before he matriculates from the Academy in two years.

Not all pupils are expected to become professional players. Those who are elite but not skilled enough to pay for their own career are encouraged to pursue tennis scholarships at American universities.

The Academy is enjoying a certain level of fame this year as Khololwam Montsi, a current MATCH pupil, is ranked 22nd in the world for juniors. Harris called Montsi’s active 28-win streak an unprecedented feat for a South African tennis player.