Olievenhoutbosch residents had blocked major roads in the area to demand housing and better services. This journalist was also assaulted by taxi drivers. 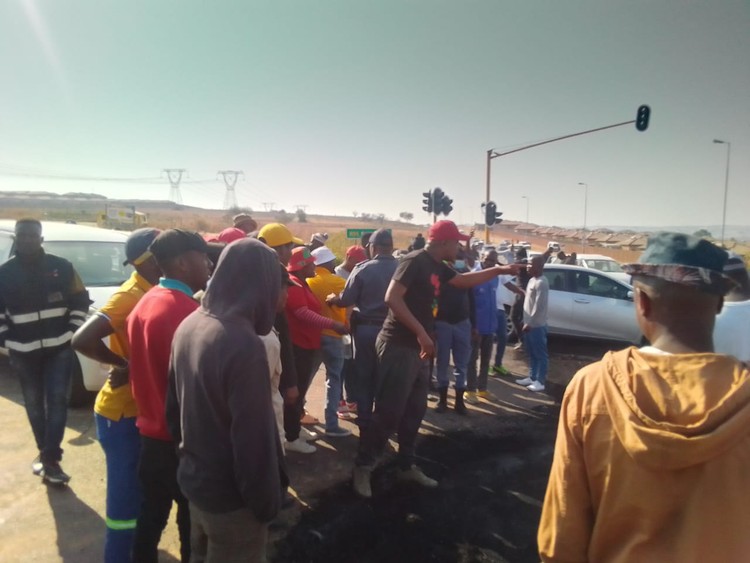 Protesters from Olievenhoutbosch in Centurion were confronted by taxi drivers on Monday morning. Photo: Ezekiel Kekana

Olievenhoutbosch in Centurion was brought to a standstill on Monday morning by a protest for better basic services. But the protest was short-lived. A group of taxi drivers stopped the demonstration and removed their barriers from the streets.

Residents, supported by the EFF Tshwane branch, had blocked busy roads, including the R55, with bricks and burning tyres. No public transport was allowed in or out of the area. People were prevented from going to school or to work.

Frustrated taxi drivers, who were not part of the protest, decided they’d had enough. By 9am, drivers from taxi associations started removing the burning tyres and rocks. They also warned residents not to join the protesters.

The drivers, armed with knobkerries and weapons, stood around a large group of protesters while debris was removed from roads. They also roughed up this reporter.

When some of the drivers realised I was taking photos of the commotion
between them and the protestors, I was beaten with a knobkerrie on my buttocks and slapped on the head. My cellphone was temporarily taken and I was forced to delete all the pictures taken before I was ordered to leave the scene or else face another beating.

Julia Ngoma, from Extension 19, said it was disappointing that the taxi drivers, who are also members of the community, behaved like bullies and forcibly ended the protest.

She said the issue of lack of housing and overall poor service delivery by the City of Tshwane affects the taxi drivers and their families too.

EFF regional chairperson Obakeng Ramabodu accused the taxi drivers of being hypocrites. Ramabodu said he barely escaped from being beaten by the angry drivers. His party members had made a human shield to protect him from being assaulted.

When we left, police were still standing around, monitoring the situation. The officers at the scene apparently also stood by while the taxi drivers forced protesters to stop their action.

By 11am the taxis were fully operating as normal.

Next:  Delays in cleaners’ contracts leave toilets dirty and blocked