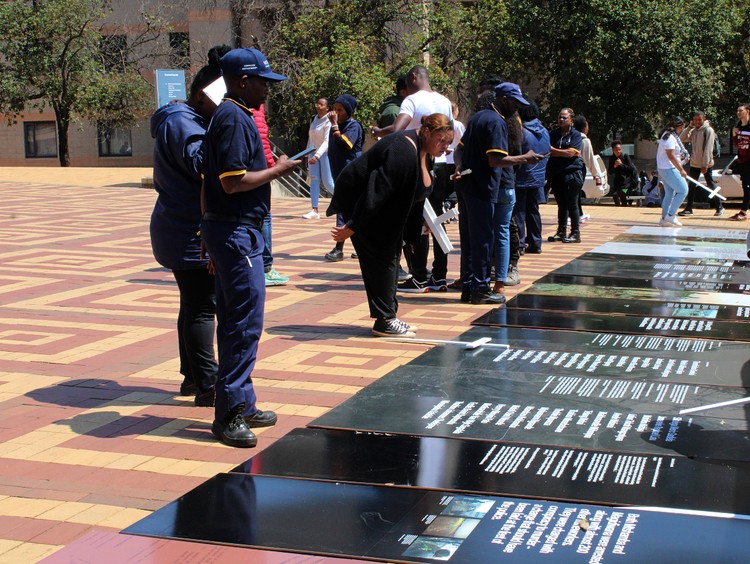 Wits University students and staff read blackboards placed across the University’s AMIC Deck, explaining the 2012 Marikana Massacre. This was part of a protest against the renaming of the deck to the ‘Wits Sibanye-Stillwater Infinity Bridge’. Photos: Masego Mafata

About 50 people picketed on the Wits University AMIC deck on Thursday against the institution’s decision to rename the deck to the “Wits Sibanye-Stillwater Infinity Bridge”. The deck is well-known as it bridges over the M1 freeway in Johannesburg, to connect the East and West campuses. It was built in 1989 and named after the then funder Anglo American Industrial Corporation.

The group instead want the deck named the “Marikana Memorial Bridge” and for the R52-million sponsorship from the mining giant to be redirected to widows and orphans, many of whom lost bread winners through the Marikana Massacre in 2012.

The picket was organised by the Socialist Youth Movement at Wits and supported by the Wits EFF Student Command, the South African Federation of Trade Unions and some staff members affiliated to the National Union of Metalworkers of South Africa (NUMSA). 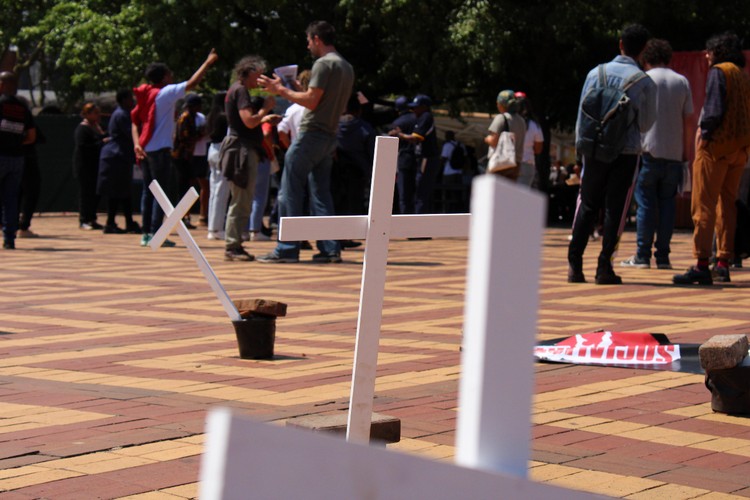 White crosses were placed on the Wits AMIC Deck in remembrance of the miners who died during the Marikana Massacre.

Mamdoo said that by signing the MOU, the university is aligning itself with a company responsible for “exploitaton, the destruction of communities and the murder of mine workers”.

Mamdoo said their demands include that Wits end its “amicable relationship with SIbanye-Stillwater and all mining capital”; commit to “pursuing radical climate justice and decolonial agenda” through consultation with staff and students; and for the University to refuse the R52-millon sponsorship and find alternative funding.

The University’s Dean of Student Affairs, Jerome September, accepted the group’s memo and promised to respond within two weeks as requested.

In a response to GroundUp, James Wellsted, executive vice president of investor relations at Sibanye-Stillwater, said, “We acquired Lonmin in June 2019, many years after the Marikana tragedy. Since taking ownership we have implemented various processes which will result in positive change for all stakeholders in the area.”

Next:  Municipality liable for child shot by mayor’s bodyguard

Previous:  Where have all the chameleons gone?