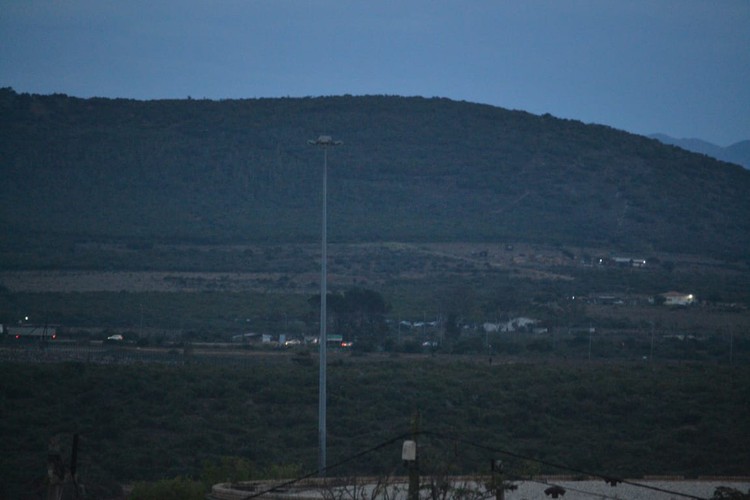 One of the street lights in Kariega that has been off for years despite complaints by residents. Photo: Thamsanqa Mbovane

“Many of our street lights in the township don’t work,” says Luyanda Gqubule, who lives in KwaNobuhle, Kariega. He said people live in fear as a result.

Residents have for years been complaining of street lights not working in the area, increasing their vulnerability to crime.

Last month, Gqubule joined other residents of Kariega at the Integrated Development Plan (IDP) draft budget meeting where many people voiced concerns about the street lights in their areas.

Gqubule said he was startled by a group of people chopping up a cow that had been knocked by a motorist on the poorly lit Mel Brooks Avenue in Ward 46. Other poorly lit areas include wards 42, 43, 44, 45 and 47.

Resident Bawa Nduku from ward 46 said, “It’s dangerous to go to the spaza shop after 7pm. The problem in particular affects women … We hear screams at night from women, especially over weekends. It is very difficult to go outside and help because you will be a target too.”

Nduku claimed that a street light in Ncamashe Street had not been working since 2016.

Ward 46 Councillor Lindelwa Qukubana admitted that the street light has been faulty “for a long time”. She said the Nelson Mandela Bay Municipality was alerted to the issue but it was never fixed.

In Gqeberha, lights in Ngwekazi and Qeqe streets in Zwide have not been working since December 2019. Resident Siyanda Ndlala said, “Our streets have now become dangerous, with mugging and accidents happening all the time. We raised concerns in IDP that we need street lights to be switched on, but they don’t heed the call.”

Mayco member for electricity and energy Luxolo Namette said that a caretaker at Zwide stadium reported intruders digging underground cables earlier this month. Two of the four suspects managed to escape and two were arrested and handed over to SAPS in Kwazakhele, he said.

Namette blamed vandalism. “I visited vandalism hotspots in Motherwell as part of the City’s drive to educate residents about the effects of vandalism. These criminals are not only stealing from the municipality, but from the residents,” he said.

Namette said that 15,000 bulbs have been bought to restore street lights.

He said he recently inspected the Neave Substation where an R11-million transformer refurbishment is underway. “The Neave substation is in a very strategic location. It supplies an industrial area and Livingstone Hospital, so it is very crucial for us to ensure that the transformer is effective and efficient as part of our continuous efforts to address ageing infrastructure.”

Next:  Why should South Africans care about Israel’s apartheid?