R50,000 worth of food and six computers stolen from Sizanani Caregivers 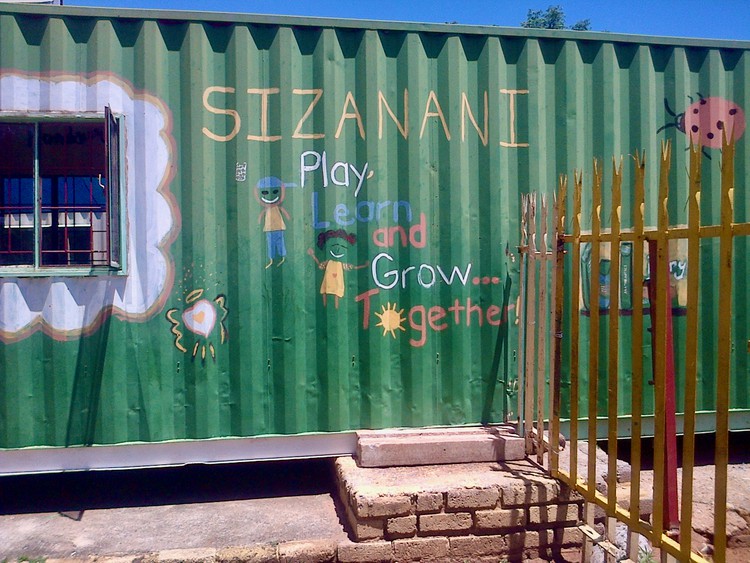 Sizanani Caregivers in Soweto which feeds hundreds of children among other activities is trying to cope after a robbery in June. Photo: Mosa Damane

“They spilled rice inside the containers and outside on the side walks, as if they were giving us a message that they were here,” says Alfred Lekeke, co-ordinator of Sizanani Home Based Caregivers Projects in Soweto.

The welfare organisation, which supports children in need, many of them orphans, was burgled on the weekend of 15 June.

Lekeke said about R50,000 worth of food, six computers, two heaters, two USB speakers for children’s activities, monitors and all the wires and extensions were cleared out by the robbers.

“They only left us with butternuts, onions and some cabbage,” said Lekeke.

Sizanani is located inside the yard of Ekuthuleni hall in Meadowlands hostel. Four shipping containers house a library block, food storage area, caregivers space, and an office block with a kitchen.

“We are currently running the centre manually, writing and recording our daily duties on paper since we lost all our computers. It is not easy, but we are coping, taking one day at a time. One of our donors assisted us with food, but it is not enough, and we are still not in good standards financially because we are broke and have a lot of people coming in since the start of the lockdown. We don’t have a security guard to watch the place at night, but our doors were fixed and reinforced,” says Lekeke.

“They didn’t break or steal anything from our library. They took only valuable items like computers in our office and food,” said Nonhlanhla Mkhwanazi, the administrator.

“Sizanani was established in 1999 by the late Mama Elizabeth Rapuleng. She retired as a teacher and took an initiative to look after sick people who were dying from the HIV/AIDS pandemic. But while taking care of the sick she realised that children were left vulnerable and that is why she decided to open this place.

“According to the Department of Social Development (DSD) criteria we are funded for 300 beneficiaries, but we have more children coming in numbers to the centre because we live in a semi-squatter camp area,” said Mkhwanazi.

“Beneficiaries get R7 per day (subsidy) and that money doesn’t cover clothes, school uniform, sanitary pads for girls and toiletries for boys. We have a huge number of dropouts in this area and we are fighting with all our might to get these children back at school and most of them are orphans,” she said.

Every January, Sizanani makes sure that all children have stationery when schools reopen. Sizanani also offers a robotics class to teach children technology.

From Monday to Friday, afternoon meals are served. Deliveries are also made to people sick in bed and poor families. The feeding scheme helps Meadowlands hostel children and the Mzimhlophe community.

“In the past we have reported child abuse cases and the police were very helpful, but it is a pity we cannot accommodate children who are victims of abuse. A child has to go back to the place where he or she encounters abuse. We also have campaigns to teach parents about child abuse and also teaching the young ones how to behave,” said Mkhwanazi.

Thabiso Hlongwane, Department of Social Development spokesperson, said, “This issue must be handled by the police. We would only engage if funds were misused by the entity, and if Sizanani needs some financial assistance, then they can send us an email and we will take it from there.”

Next:  Zackie Achmat calls for activism against Covid-19

Previous:  Human Rights Commission to investigate after man dragged naked from his shack