UCT comes to defence of professor accused of racism 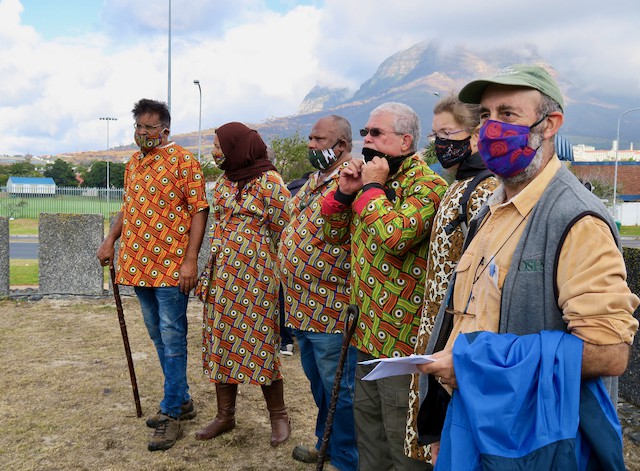 Professor Leslie London, seen here at the front of a group of civic and traditional leaders opposing the River Club development, was attacked in an email apparently sent by the First Nations Collective. Photo: Steve Kretzmann

A slanderous attack on a professor by a Khoi group supporting the controversial River Club development has resulted in the University of Cape Town issuing a statement attesting to his integrity and supporting his freedom to be involved in civic action in the interests of social justice.

The statement of support issued by UCT and the Faculty of Health Sciences on Thursday 27 May came after Professor Leslie London, who is the chair of the Observatory Civic Association, was targeted in an email apparently distributed by the First Nations Collective which supports the R4.5bn complex to be built on the River Club site at the confluence of the Liesbeek and Black River in Observatory. The River Club development is to include Amazon’s new African headquarters.

The Observatory Civic Association has stood with a number of other civic organisations and Khoi traditional houses and leadership structures in opposition to the River Club development, which is to be built on an environmentally sensitive floodplain. The River Club is also a site of original dispossession of land by Dutch settlers and is sacred to the Khoi and San nations.

However, a number of Khoi leaders have in the last 18 months coalesced as the First Nations Collective and come out in support of the development. The land owner and developer has altered the plans to include a first nations media centre, indigenous garden, symbols and road names within the precinct memorialising Khoi heritage.

The email came from firstnationscollective@gmail.com, and was sent on 15 May to at least 37 of London’s academic colleagues, including colleagues in the United Kingdom, Stellenbosch University and the University of Kwazulu-Natal.

The email, which included his cellphone number and home address, accused London of “usurping indigenous First Nations narratives for his own personal, racist and egotistical agendas and vendettas”.

The unsigned email said London “continues with his white colonial ways of wanting to determine for the descendants of the Khoi and San what is best for them”.

It then went on to “demand” UCT suspend him from his position as head of public health medicine in the School of Public Health and Family Medicine, and investigate his activities related to the River Club.

The First Nation Collective have not denied they initiated the email, nor have they distanced themselves from its contents.

The School of Public Health and Family Medicine responded on 24 May, stating that while London’s activities with the Observatory Civic Association (OCA) were not linked to the university, London had the school’s “full support”.

“No element of Professor London’s activities with the OCA related to the River Club development have involved unprofessional conduct in any manner whatsoever,” stated the school.

It went on to state they were also “deeply concerned about any practice of anonymous, broadcast emails being sent to attack an academic (or any citizen) without substantiation”.

Following the City of Cape Town tribunal in April dismissing an appeal against its decision to grant rezoning of the land and departures from city spatial development frameworks, the land owner and developer, Liesbeek Leisure Properties Trust, announced it would be putting its plans into action in mid June.

This was despite the City’s Environmental Management Department objecting to the development which will fill in a floodplain.

The provincial Department of Environmental Affairs and Development Planning, however, granted Environmental Authorisation in September last year, despite the Heritage Impact Assessment not being accepted by Heritage Western Cape.

While allowing an office, retail, and residential complex to be built on a floodplain, the City of Cape Town has stated it needs to evict the Willow Arts Collective from a parcel of municipal land a few hundred metres from the River Club, because the land is on a floodplain and thus unsuitable for habitation.

Similarly, the City has rejected calls from housing activists to build affordable housing on land they lease to the Rondebosch Golf Club, because much of the land is a floodplain.

Next:  Refugee uses art to tell stories of xenophobia