CEO says sector has lost over 50,000 jobs this year alone 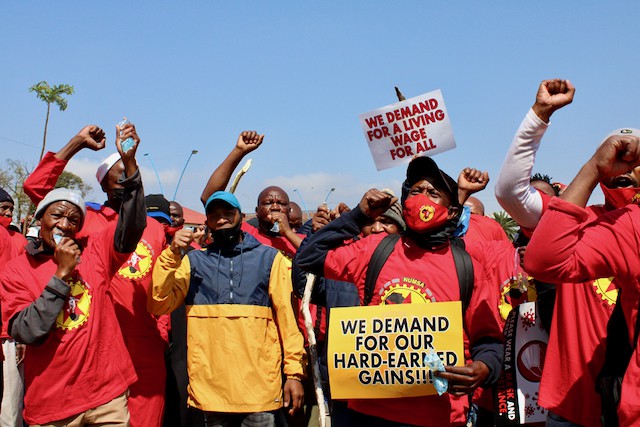 National Union of Metalworkers of South Africa members working in the engineering sector gathered at Mary Fitzgerald Square in Johannesburg on 5 October ahead of a strike. Photo: Masego Mafata

The Steel and Engineering Industries Federation of Southern Africa (SEIFSA) said the wage increase offer made to striking National Union of Metalworkers of South Africa (NUMSA) members in the steel sector last week was its final, closing offer.

“The proposed increase is 5% across the board for artisans and 6% for general labourers. We have nothing more to add to the offer we’ve made to NUMSA. We are confident that this offer is fair, equitable and sustainable,” said Lucio Trentini, SEIFSA chief executive officer, during a press briefing in Johannesburg on Friday.

According to Trentini, the 5% increase for the highest-paid workers (artisans) would translate to a guaranteed personal increase of R4.24 per hour for the first year of the agreement, R4.45 for the second year, and R4.67 the third year.

The lowest-paid workers will receive a guaranteed personal increase of R2.97 per hour for the first year, R3.15 for the second year and R3.34 in the third year, said Trentini.

The offer was rejected by NUMSA members on Thursday. Irvin Jim, NUMSA general secretary, said that while members are prepared to settle on 6%, the union demands that the increase is calculated on what businesses actually pay workers and not the minimum rates as set by the Metal and Engineering Industries Bargaining Council Main Agreement, currently R49.55 per hour.

But Trentini said the industry could not afford to pay wage increases that are calculated on actual rates of pay. He said many companies are struggling just to survive in the current economic climate.

“The sector has lost an excess of 50,000 jobs this year alone. Further job losses are becoming more of a reality, the longer the strike continues,” he said.

Elias Monage, chair of the SEIFSA board, said wage increases on actual rates of pay would also make it difficult to extend the wage agreement to employers who are not affiliated with employer associations and employers who pay workers above the industry minimum rate.

Monage said SEIFSA is advocating for employees who accept SEIFSA’s offer to return to work from Monday, to prevent further financial losses in the sector.

Next:  Police use stun grenades to break up Cape Town housing protest