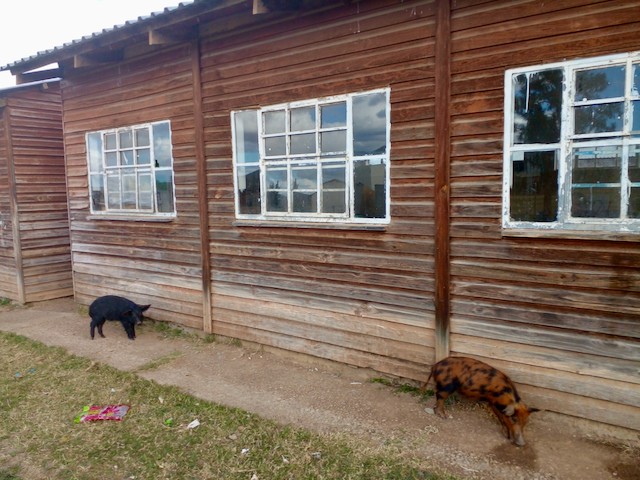 “About four years ago the department appointed a contractor to come and build 16 new flush toilets,” said Alfred Myburgh, chairperson of the school governing body (SGB). “But those toilets could not be used because the water pump was too small and unable to keep the flushing system running.”

He said the school informed the education department immediately and several times thereafter, but the problem has never been resolved.

When it can, the school tries to flush the toilets using its jojo tank but it isn’t effective.

When GroundUp visited the school, the yard stank of excrement and urine: there was excrement on the toilet floors and urine on the walls.

The old toilets, donated by an RDP building contractor, are badly damaged. Learners and staff relieve themselves in the bush and open fields. We found teachers peeing in buckets.

“Proper learning and teaching cannot take place here because there are no toilets and not enough classrooms. This has forced many parents to take their children to other schools,” said Myburgh.

A teacher who did not want to be named said they used to have 800 learners.

“The bright future of our children is going down the drain because the department has neglected our school,” said Myburgh.

SGB member Mbuzo Pango, who also works as a security guard at the school, said, “We have 15 classrooms but four of them have no doors because of vandalism. Our ceilings are broken because the thieves enter through them to steal the electric cables. Most of the valuable school equipment is kept at nearby houses for safety.”

Pango said they had protested at the education district offices and the provincial office in Zwelitsha.

A teacher told GroundUp, “Our grade two class is overcrowded with 72 learners. Proper teaching and learning is unable to take place. The education we give these learners under these conditions is very poor. But we are teaching them for the sake of teaching.”

Questions were sent four weeks ago to Malibongwe Mtima, provincial education spokesperson. He said he was unable to get hold of the infrastructure officials.

Next:  Protests in Limpopo against court “bungles”