Salt River community celebrates shared heritage with the Palestinian cause 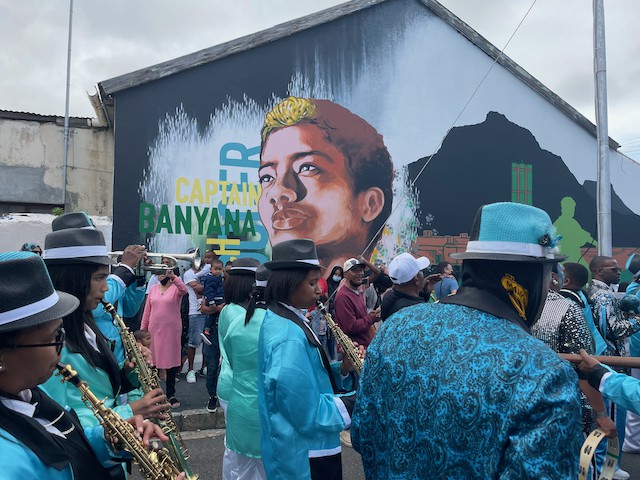 The first mural, on Pope Street, honours four legal heroes with roots in the area and surrounds – Judge Siraj Desai, Dullah Omar, Anwah Nagia, and Benny Kies, and was painted by Natheer Hoosain and Nazeem Jardine. Local hero and Banyana Banyana coach Desiree Ellis’s portrait by artist Robyn Pretorius rises up on Fenton Road, while a series of murals painted in honour of assassinated Palestinian cartoonist Naji-al Ali have been painted on the corners of Chapel Street and Addison Road, by Tasneem Chilwan and Nazeer Jeppie.

The Pennsylvanian minstrel troupe led a procession from the Pope Street mural to the Fenton Road mural of Desiree Ellis. 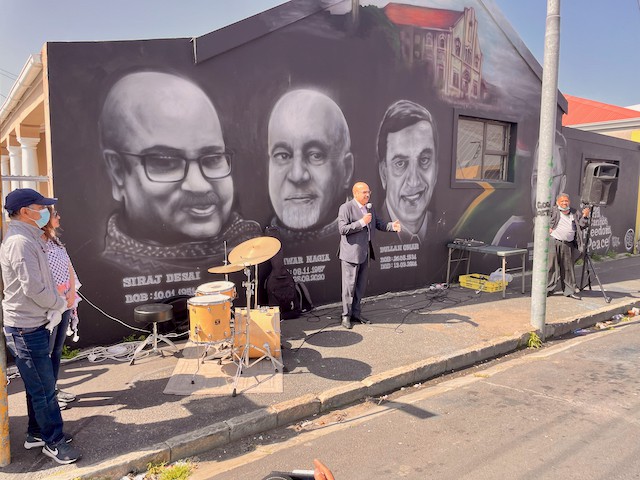 Judge Desai, the only living member of the memorial wall, grew up nearby. Speaking at the unveiling, Desai said that the four people in the mural were united in three fundamental regards: a commitment to fighting racism; a commitment to the creation of a new society freed from the “imperialism” of the United States of America; and, a commitment to the struggle of the Palestinian people.

Palestinian Ambassador to South Africa Hanan Jarrar handed over a letter of support to Judge Desai from a Palestinian Judge, and head of the Interim High Judicial Council, Chancellor Issa Abu Sharar. In June, the South African Zionist Federation laid a complaint against Judge Desai, currently the Ombudsman for Legal Services, with the Judicial Conduct Committee for his comments in support of Palestine.

Jarrar told GroundUp that the Salt River murals were important symbols of cultural solidarity, and spoke to the long-standing history of shared struggle against apartheid between South Africa and Palestine. In a brief address Jarrar welcomed the “honouring of a living symbol” in the mural of Judge Desai, and welcomed the use of walls as positive symbols rather than sites of division.

Imam Rashied Omar called the mural a tribute to the under-recognised Unity Movement of South Africa. “By choosing this image, we are correcting a lacuna in our history,” said Imam Omar. “Today we celebrate the taking back of our streets and our walls.” 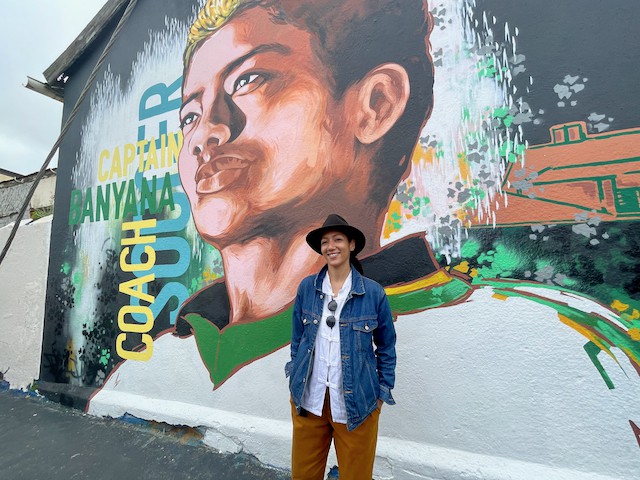 Anwar Omar, vice-chair of the Salt River Heritage Society (SRHS), told GroundUp that this event was to be the first of many. The society hopes to commission further murals and to hold similar events celebrating local culture and history every three months. Omar said that often murals had been painted in the area that had no connection to local people or the culture, “a form of cultural gentrification”. 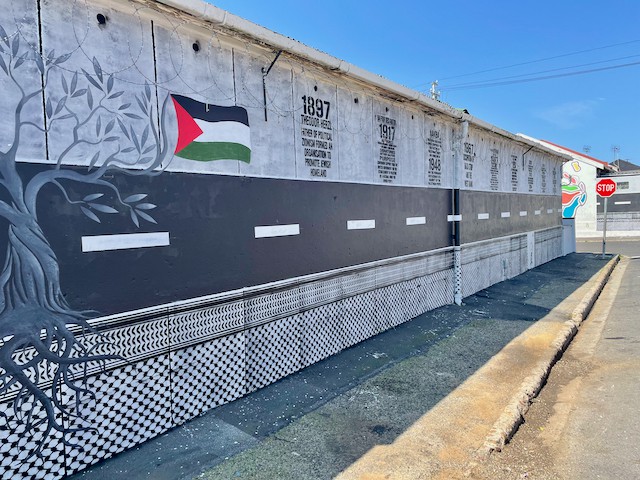 Na’aim Saiet’s wall was used for part of the Palestinian mural. Saiet and his brother were born in District 6, but his family moved to Salt River when they were still toddlers – a story familiar to many Salt River families. Saiet said that the history of forced displacement was common to Palestinians and the people of Salt River.