“It is unfair, inhumane and unconstitutional for the authorities to suggest jail for any citizen for the possession of cannabis” 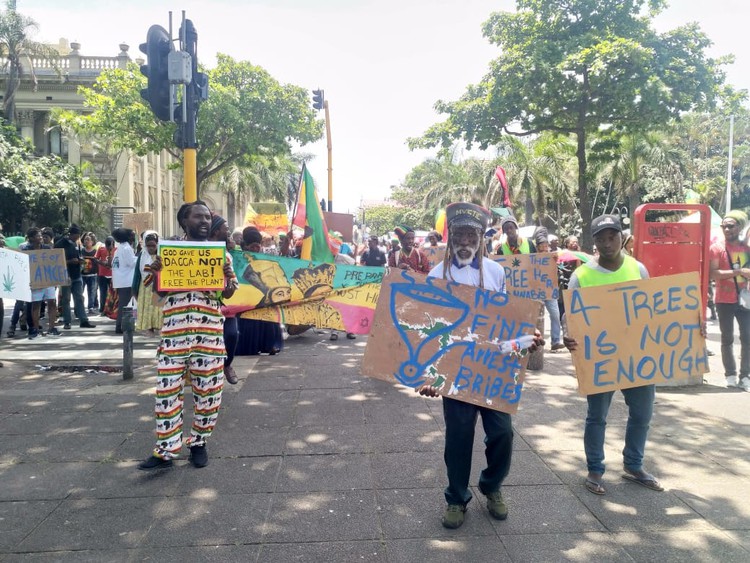 About 100 members of the Rasta Business Foundation marched from King Dinizulu Park in Berea to Durban City Hall on Thursday to oppose the draft Cannabis for Private Purposes Bill. They handed a memorandum, addressed to the Minister of Justice and Correctional Services Ronald Lamola, to City official Njabulo Zulu, who said he would forward it to the justice department.

The bill was published by the department for public comment in August to give effect to a 2017 Cape High Court judgment that declared sections of the Drugs and Drug Trafficking Act unconstitutional. Most of the judgment was upheld by the Constitutional Court in a 2018 ruling.

If the bill is passed there will be a maximum jail term of 15 years for dealing in cannabis. Smoking in public can land you in prison for up to two years, while smoking around children can result in four years in jail. At home you may grow up to four flowering plants if you live alone, and eight plants if there are two or more adults. You may possess 600g of dried cannabis if you live alone or 1.2kg if there are two or more adults in your home.

Rasta Enjelis of the Rasta Business Foundation said his organisation opposed jail terms for use or possession of cannabis because it is a natural plant. “It is unfair, inhumane and unconstitutional for the authorities to suggest jail for any citizen for the possession of cannabis. No human being should interfere in relations between humans and plants. It is very hypocritical of government officials to single out the plant and [criminalise its use].”

Jason O’Donoghue of the South African Cannabis Community and Regulatory Association (SACCRA) said the bill dictates what consenting adults do in private. “How ridiculous that [you get] jail time for one gram over the allowed amount. How can one gram justify jail time? How is 601g more dangerous than 600g?”

O’Donoghue also criticised the bill for giving police too much leeway to enter people’s properties.

Next:  Call for sex offender list to be made public

Previous:  Streets in central Uitenhage pile up with garbage for months