Dunoon residents hope years of “tip-toeing over sewage” will end 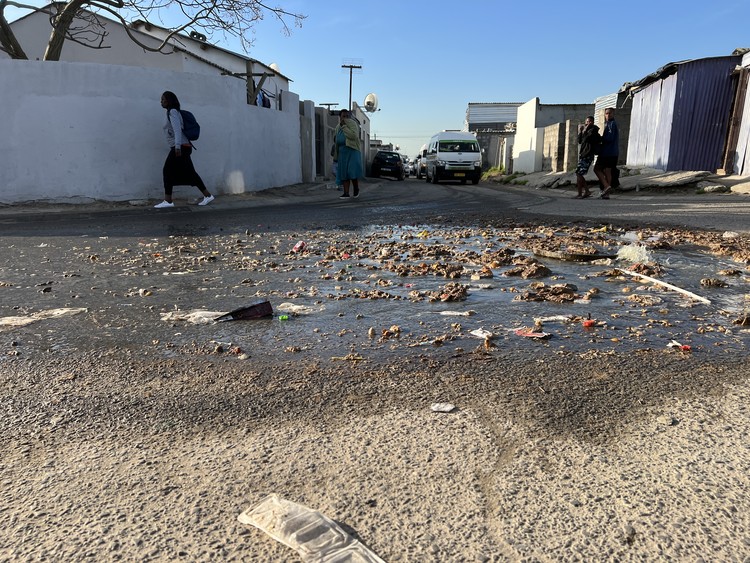 For years, Dunoon residents have had to live with raw sewage overflowing into their streets. Photo: Peter Luhanga

For years Dunoon residents have had to live with raw sewage overflowing into their streets.

The sewerage infrastructure was designed for single RDP households. The community has since become densely populated, with more two and three-storey flats being built, overburdening the system.

JJ Dyers Construction, a contractor for the City of Cape Town, is now installing new pipes and manholes parallel to the old crumbling sewerage pipes which can longer cope.

“For eight years I have been tip-toeing over sewage. We’re very excited and grateful to see our ward councillor at the centre of service delivery in our township,” said Nomhla Maposa, who lives along Mnandi Street, where sewage frequently overflowed when drains were blocked.

Ward 104 Councillor Messie Mpukane (ANC) said, “People will stop smelling and walking over their own faeces in Dunoon as that was inhumane. We’re grateful as a community that this company, through the City, is doing this for us. We hope the City will upgrade the entire sewer network, so other sections in the township can also be relieved from the blockages.”

Iesa Hamit, a surveyor at JJ Dyers, said the company is installing new pipes stretching 180-metres from the Mnandi traffic circle to Akkerboom Avenue. According to Hamit, the cost of the project is R180-million. He said they started the work earlier this month, replacing the old 160mm pipes with new 250mm pipes.

“The density of people is increasing blockages in the pipes. The new pipes will be able to accommodate the population. We’re going to install our manholes to accommodate the sewage coming from high density areas to join our new sewer lines.” Hamit said the project could be done by the end of August.

According to a City statement, the water and sanitation department launched a Sewer Spill Reduction Plan “to help contend with more than 300 sewer blockages and overflows” across the city every day.

“The plan targets a 50% reduction by 2030 … Over the next three years, more than R10-billion of the City’s R29-billion capital expenditure plan will be invested in water and sanitation infrastructure to support sustainable development, of which R1.6-billion is specifically for conveying sewage,” the City has said.

Next:  Philippi police station is only open during daylight

Previous:  Parks for the people: everyone needs green spaces