Call for Israeli embassy in Pretoria to be closed 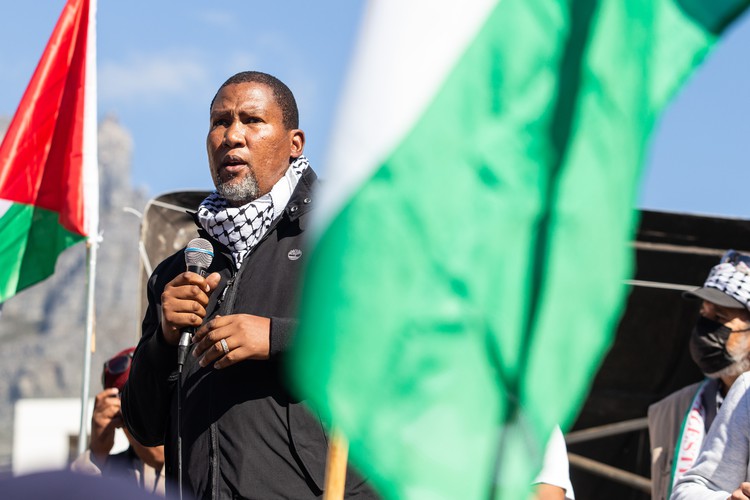 Mandla Mandela, ANC MP and grandson of Nelson Mandela, called for the closure of the South African embassy in Tel Aviv. He also called on people to convene outside the Israeli embassy on Mandela Day to put pressure on the South African government to close the embassy. Photo: Ashraf Hendricks

With their familiar checked scarves and fists raised high, the chant “free free Palestine” could be heard echoing through Cape Town’s city centre as well over a thousand people marched to Parliament in a show of solidarity with Palestine.

The protest comes after a number of events in the Middle East including forced evictions in Sheikh Jarrah, clashes outside Al-Aqsa Mosque, and Israeli air strikes on the Gaza Strip, which started on Monday, killed over 40 people.

“What we call for, is the closure of the [South African] Embassy in Tel Aviv,” said Mandla Mandela, ANC MP and grandson of Nelson Mandela. He said that on Nelson Mandela International Day on 18 July, crowds should convene in front of the Israeli embassy in Pretoria to have the government “shut down and remove” the embassy from South Africa. Mandela said that the only embassy South Africans want to see is the one in Ramallah, Palestine.

He said that it pains him how children are killed and jailed and yet “the world is silent”. Noting the great variety of political parties and religious institutions at the protest, he said, “When it comes to the Palestinian issue, we are united as South Africans and we speak with one voice”. Mandela said that they are standing side by side with the Palestinians: “We feel their pain and we cry with them”. 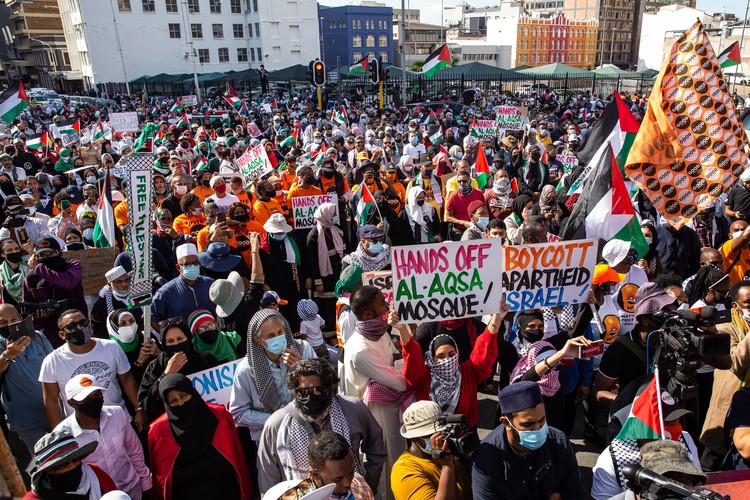 This was the second Palestinan solidarity protest in Cape Town in two days. On Tuesday, about 300 people picketed outside Parliament calling for the government to boycott and impose sanctions on Israel.

Wafeq said that what happened in District 6 would hopefully not happen in Sheikh Jarrah where Palestinian families are on the cusp of being forcefully removed.

“All the people of Palestine are asking for is to be able to get back what is rightfully theirs. All they are asking for is to allow them to live with dignity in a free Palestine,” said Ahmed Munzoor Shaik Emam of the National Freedom Party (NFP). He said that people have forgotten what oppression was about “during the days of apartheid when the very same Israel, colluded with the South African aparthied regime and tried to break sanctions”.

Political parties also joined the protests including those from the EFF, ANC, NFP, the GOOD Party and UDM. COSATU also participated. The protest was organised by the Al-Quds Foundation and the Muslim Judical Council (MJC).

Next:  Judge proposes plan to speed up re-opening of Refugee Office