Nurses refuse to work at two clinics in Motherwell 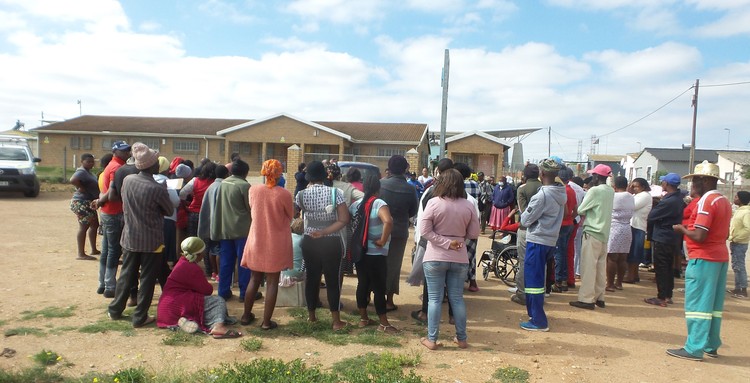 Residents of Motherwell, Gqeberha gathered outside the Thanduxolo clinic on Wednesday. They are demanding two clinics which were closed be opened immediately. Photo: Joseph Chirume

About 100 residents of Motherwell, Gqeberha, gathered outside the Thanduxolo clinic in NU10 on Wednesday. They are demanding this clinic and the clinic in NU11 be opened immediately.

The NU11 clinic has been closed since the provincial Department of Health started an investigation following the death of 15-year-old Zenizole Vena on 21 September.

It is understood that Zenizole was abducted on 17 September on her way to school in Malabar. She spent four days being drugged and raped by her captors. On 21 September she was found in the road by a resident and was taken to the NU11 clinic, but staff there apparently found she was “clinically stable” and sent her to the police station to open a case. She died at the police station after she had seizures. Her ordeal sparked outrage in the community. Her family intend to take legal action against the state.

The Democratic Nursing Organisation of South Africa (DENOSA) said nurses at both clinics did not report for duty because they are afraid that angry community members will attack them because of Zenizole’s incident. The union emphasised that this was not a strike.

Deputy Regional Chairperson of DENOSA Vuyo Dlanga told GroundUp that as a temporary measure, nurses from the NU11 clinic had been sent to work at other clinics. “The closure of that clinic led patients to flock to the nearby Thanduxolo Clinic in NU10, which overwhelmed its services. This resulted in services not being rendered properly and our members felt threatened by patients,” Dlanga said.

Patient Noceba Sithebe has been struggling to get her monthly chronic medication. She is disabled and uses a wheelchair. She has chronic diabetes and high blood pressure. She was turned away again on Wednesday from the Thanduxolo clinic.

“I stay alone and only get my grandson to push my wheelchair when he is not at school. Where and when will I get my treatment? I sent somebody to the Motherwell Healthcare Centre today and that person was also turned away,” said Sithebe.

Outside the NU10 clinic on Wednesday, ward 55 councillor Thanduxolo Doda blamed staff for not reporting for work. “We held several meetings and the nurses assured us that they would work this past Monday but they did not do so,” he said. “But nurses still refuse to come to work claiming that they are afraid of angry residents,” he said.

Councillor Noxolo Mafumana said nurses had also used this opportunity to highlight unresolved long-standing grievances. “Nurses are angry that no resident intervened when people closed the clinic. The clinic has staff shortages and has not had any new staff since 2010. Staff say they are not safe following a string of break-ins.”

Mafumana said the department should hire armed security guards at the clinics during the night.

Health department spokesperson Yonela Dekeda said the investigation into Zenizole’s death is still underway. Dekeda said the staff at both Thanduxolo and NU11 have not reported for duty since Monday. “The department views this as an unprotected strike action because there had been agreements that normal operations would resume on Monday.”