Musina closed down in protest over water 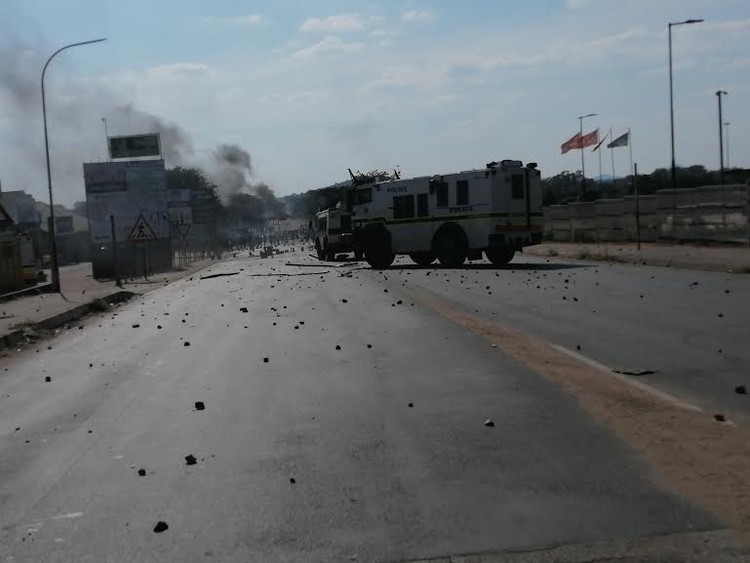 Roads were closed in Musina this week as protesters and police clashed. Photo: Bernard Chiguvare

Protests over water brought the town of Musina in Limpopo to a standstill this week. Major roads including the one to Beitbridge were blocked, shops closed and learners were not able to go to school. Some shops were looted.

The protest started on Tuesday evening.

Community leader Binky Sefake said at the beginning of the week water had been cut off without notice by the Vhembe District Municipality (VDM), which is responsible for water. “We can not continue being undermined by VDM. The community is now demanding a permanent solution to the water crisis in Musina,” said Sefake.

Residents say on Wednesday they asked to be addressed by the VDM Executive Mayor Nenguda Dowelani but the mayor instead sent Municipal Manager Tshimangadzo Ndou. They say she would not leave the police Nyala to speak to them, and demanded that all residents who gathered at a community hall be searched for dangerous weapons before she addressed them.

“It is surprising that the municipal manager wants us searched before addressing the residents but when we voted authorities into power they never requested that we be searched,” said one protester who did not want his name published.

Sefake said since Tuesday night the community had been having running battles with the police. Residents blocked the N1 and R572, the road to Venetia mine, and also blocked township streets with skip bins, tyres and black bags full of garbage.

In October when residents complained about water supply, the municipality said 19 of 36 boreholes which supply the reservoir were not working.

On Wednesday, 11 May VDM in a statement said that the water shortage was the result of three leakages on the main pipeline that supplies Musina with borehole water from the Limpopo River. The municipality said technicians were fixing the leakages and that tankers would supply water in the townships in the meantime. Spokesperson Matodzi Ralushai said supply of water to residents would start again early on 12 May.

But taps were dry for most of Thursday and no tankers were around. Around 3pm some parts of the township received water for about two hours then taps went dry again. “This is what the municipality usually does when it notices residents are angry about water,” said Sefake.

“They do it to avert protest. This time we are not going to stop unless we are sure there is a constant water supply in Musina. We no longer want any water tankers as this will delay the municipality permanently fixing the water crisis,” he said.

The usual route to Musina townships from town by minibus taxi is via the N1 and the Musina Mall but on Thursday the N1 was closed. There was a heavy police presence. Several police Nyalas could be seen chasing protesters who fought back throwing stones. Police shot at protesters with rubber bullets.

Protester Berries Munonoka said the water supply should be handed over from Vhembe to the town of Musina. “Authorities running Musina water affairs do not stay in Musina and do not share our experiences.”

Meanwhile as residents protested, district municipality officials met community representatives. The representatives demanded a meeting with the Minister of Water and Sanitation, as well as the return of water administration to the local municipality, and a constant water supply.

During Thursday night, the windows of a municipal office were smashed and a municipal tractor burned. By Friday morning some shops had re-opened and police vehicles were patrolling the N1.

In response to our questions, Ralushai said he was checking with teams on the ground, but said the municipality could not send water tanks into communities while during protests because some residents were opposed to it. He said the Vhembe District Municipality plans to drill four more boreholes in Musina.

Next:  Five years and two building contractors, but these houses are still not finished

Previous:  Concourt to rule on access to books for blind people