And other essential news of the day

WHAT YOU NEED TO KNOW

Quite sensational news from Parliament this morning where controversial ANC figures Nomvula Mokonyane and David Mabuza were not sworn in as MPs. Mokonyane, a Jacob Zuma cabinet appointment, had been nominated by the ANC to be its ‘chair of chairs’ – the person who co-ordinates the work of parliamentary committees. But shortly before the swearing-in ceremony today the ANC indicated she would not be taking up her seat due to ‘family considerations’. Mokonyane became notorious for her disastrous tenure as minister of water and sanitation and has been implicated in state capture allegations. She most recently served in the environmental affairs portfolio. Earlier this morning deputy president Mabuza asked that his swearing in be postponed so he can respond to a report by the ANC’s integrity commission that he brought the party into disrepute. The ANC said Mabuza wanted to first address the commission about the finding. There is now increased speculation that either Nkosazana Dlamini-Zuma or Naledi Pandor will be deputy president in a new cabinet.

Two others who wont be returning to parliament are former finance minister Malusi Gigaba and former speaker Baleka Mbete. No reasons have yet been given for their withdrawals – they both qualified as MPs in terms of their positions on the ANC’s list – but Gigaba has long been associated with state capture and Mbete’s performance as speaker was generally underwhelming.

Maimane not happy with Zille

DA leader Mmusi Maimane has condemned Helen Zille for her controversial ‘black privilege’ tweets. The former party leader and recently retired premier of the Western Cape triggered a Twitter storm by mocking the concept of white privilege, and countering that black privilege is the right to steal billions and still be re-elected. Maimane now has the thankless task of handling the fallout – and dealing with the Gogo who sparked it all. He said yesterday: ‘Let me say this categorically, I do not agree with the views put forward by the former premier of the Western Cape. The discussion on privilege in this country is a function not only of our history, which advanced a particular race over another, but it’s also a function of what the last few years in government have done, which failed to produce opportunity to be included in our economy.’ It has been reported that the party will be taking formal steps against Zille, but nobody has publicly elaborated on what these might be.

It’s been predicted for months now, but Theresa May’s tenure as Prime Minister of the United Kingdom is surely on its last legs. Last night an attempt by her to offer a second Brexit referendum was rubbished by all and sundry when she added the condition that MPs accept her current Brexit deal first (in other words: the referendum would be about staying in Europe or accepting her exit deal). Many of her own Conservative Party dismissed the suggestion and it now seems likely she will step down. Speculation has it that the controversial and eccentric former London mayor Boris Johnson will get the top job.

The rat and the aardvark

The menace award goes to Alabama’s public television network, which refused to air an episode of the children’s series Arthur that features the same-sex wedding of a gay cartoon rat to his partner, a gay cartoon aardvark. The episode, Mr Ratburn and the Special Someone, shows Arthur’s third-grade teacher Mr Ratburn marrying a chocolatier named Patrick. This was the first episode of the 22nd series of Arthur, which was launched in 1996. Ten years ago, the network refused to broadcast an episode which depicted Buster, a rabbit, visiting a girl who had two mothers. Somebody needs to take Alabama by the scruff of its neck and drag it into 2019.

Zimbabwe’s new energy minister was sworn in this morning as citizens were reeling from a 50% fuel hike that came into effect yesterday. It followed the country’s central bank ending oil importers’ access to US dollars at a favourable rate, forcing them to buy fuel at the official exchange rate. The bank rate deal had been acting as a buffer for higher prices. The new rate follows an increase of 150% earlier this year that led to street riots and several deaths. At the same time businesses are battling to survive power cuts of 10 hours a day. Inflation is presently sitting at 75%.

The Wall Street Journal is reporting that US aviation experts are arguing that the crash of a Boeing 737 Max in Ethiopia in March may have been caused when a birdstrike sent an error message to the plane’s sensors, triggering an automated anti-stall system which caused the jet to nosedive. The March crash followed one in Indonesia last October. A total of 346 people were killed. Boeing has been updating its software for the jets after pilots were unable to override the system. Until now the crashes have been blamed on the faulty software alone. Ethiopian Airlines investigators are disputing the birdstrike theory, but Boeing’s share price was up on the news. Yesterday China’s three biggest airlines announced they are demanding compensation for the grounding of their 737 Max fleets, joining airlines from several other countries who are already planning legal action.

IN THE SPORTS CORNER

Another Crusader in trouble

The Crusaders rugby team did not have the best of times during their stay in South Africa – or maybe they enjoyed it too much. In their second match on tour on Saturday they battled to a 19-19 draw against the Stormers, with controversy over whether a disallowed try should have been awarded to the New Zealand Super Rugby champions. Their woes followed them off the field and New Zealand Rugby and the Canterbury Crusaders have launched an investigation into two separate incidents in Cape Town over the past week. As reported yesterday, three players have been accused of making homophobic comments and gestures toward other patrons at a fast food restaurant after the match on Saturday. Now a separate incident has emerged: flyhalf Richie Mo’unga has been accused of spitting beer over a woman and her friends and then ‘pinching her bum’. Mo’unga apologised the next day via Instagram.

The two top women’s marathon runners at the Rio Olympics have both fallen foul of doping violations. Eunice Kirwa, the silver medalist in the marathon at the Rio Games in 2016, has been provisionally suspended from competition for EPO, the Athletics Integrity Unit announced yesterday. The suspension for Kirwa, who was born in Kenya and represents Bahrain, follows after the gold medallist in Rio, Jemima Sumgong of Kenya, tested positive for EPO in 2017. Sumgong is currently serving an eight-year suspension. Both violations are after the Olympics so the Rio results stand, but they have raised questions about the pair’s medal-winning performances in Rio.

Twenty-five years to the day that Pulp Fiction debuted at Cannes, director Quentin Tarantino was back last night for the premiere of his new movie Once Upon a Time in Hollywood. The film, set in ‘60’s Hollywood, stars Leonardo diCaprio and Brad Pitt, and is reportedly Tarantino’s swansong before his planned retirement. It is his 10th movie. Crowds of people hung about before its screening, hoping for a ticket – according to the Guardian, many holding up scraps of paper scrawled with ‘Once Upon a Time in Hollywood s’il vous plait’. At a press screening, the audience was asked to keep the tightly guarded storyline to themselves, prompting some boos, but at the red-carpet première a short while later, Tarantino basked in a seven-minute ovation. You can read The Guardian’s five-star review of the movie here. 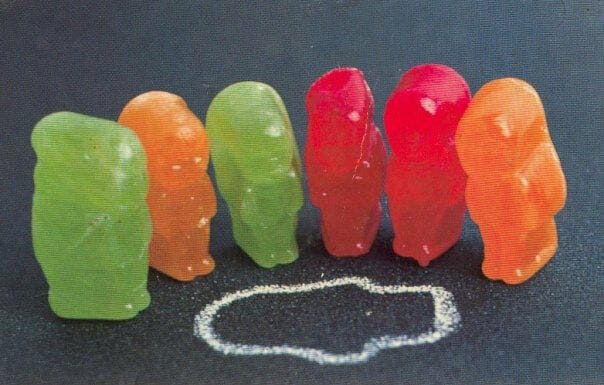 This photo of the sad outline of a dead jelly baby on a Cape Town street was posted on Facebook this week by one of hundreds of runners who were aghast when participants in the FNB 12 One Run were handed cups full of jelly babies instead of water. Thirsty runners tossed thousands of the little jellies on the road, leaving them to be trampled underfoot by those who followed. Some were seriously annoyed at the littering, others got spoofing about the jelly baby massacre. ‘I killed quite a lot of babies…not happy to be a murderer,’ noted one. ‘RIP 14 million jelly babies,’ said another. ‘Don’t let anyone from Alabama in the US find out…’ ‘#jellybabylivesmatter’

Two South Africans thought a finger-sucking advert for Doritos sucked and promoted sexual harassment. They wanted the Advertising Regulatory Board (ARB) to bin it. In the advert, which you can watch on TimesLive, a man is enjoying a packet of Doritos when a colleague appears and asks: ‘Hey, are you gonna finish those?’
‘Sorry, they’re already gone,’ the Doritos-eater responds.
‘No, they’re not,’ says his colleague. ‘You left the best part…’
First man starts saying: ‘No, I am pretty sure they’re…’ but his colleague grabs the man’s hand, sucks his finger and says: ‘Mmmm, cheese. Hello, Doritos.’
In a second scene a third man enjoying Doritos wipes his hands on his pants. The finger-sucking man appears, rips this man’s pants off, sniffs them and says: ‘Doritos.’
The ad ends with the payoff line: ‘Doritos. For the Bold.’
The ARB tossed out the complaints and said the ad was so over-the-top that no consumer would consider imitating it. Besides, it added, even if some people found the ad was bad taste, the ARB wasn’t the ‘taste police’.

Our wonderful Wednesday effort is from Consider John Frazzled (@FrazzleMyGimp) for this silliness:

GUY: Can I buy you a drink?
HER: I have a boyfriend.
GUY: {counting coins on the table} He can only get something small then.

CRYPTIC CLUE OF THE DAY

In this feature, The Stolen Kids of Sarah Lawrence, The Cut explores what happened to a group of bright students who fell under the sway of their classmate’s father – Larry Ray, a man who lived on the blurry edges for most of his adult life and caused untold devastation in the lives of the people around him.

Public Protector Busisiwe Mkhwebane is a disaster. This week she took a massive klap from the Gauteng High Court over her report on the Estina Dairy Farm Project. This is the third such legal setback for her, and the overwhelming conclusion must be that she is incompetent and now has zero credibility. Here’s the problem though: she has been acting with an obvious agenda towards the Zuma faction in the ANC and is also evidently happy to work with the EFF. Can she, will she, be fired in such circumstances? The constitution requires that a two-third majority of MPs must vote for her removal for the President to act. Whatever Cyril Ramaphosa might think or want, it seems unlikely that the corrupt cadres and their venal allies in parliament will not be able to block such a move. And so she will continue to foul our public lives.

We welcome your insights, observations and compliments (especially your compliments) so please send them to thenewsletter.daily@gmail.com.

the.news.letter is produced by Chris Whitfield, Jonathan Ancer and Martine Barker. Click here for all the gory details about us.

GroundUp’s Disclaimer: Although we like the.news.letter and are promoting it in May, we don’t produce it. If you want to express how much you love or hate it, please email Chris, Jonathan and Martine.

Previous:  Activists protest against corruption as new MPs sworn in