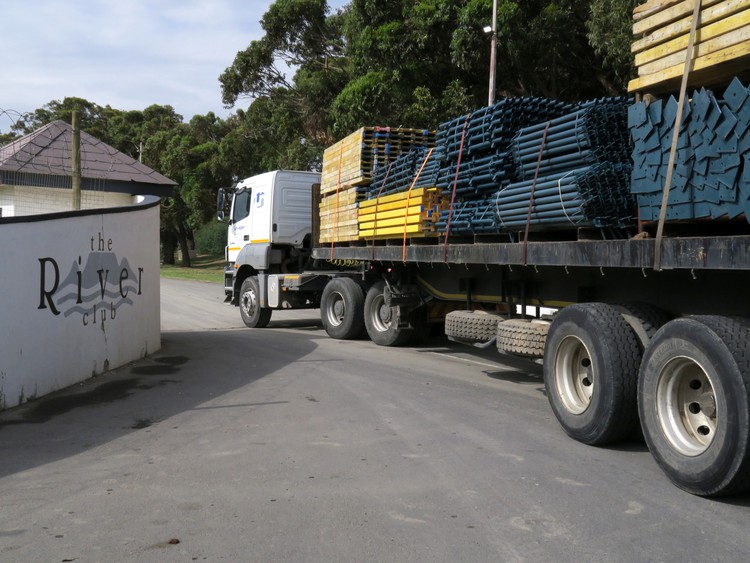 A truck carrying scaffolding for the construction of the 150,000 square metre mixed-use development at the River Club enters the gate to the site, which is part of the Liesbeek River floodplain. Photo: Steve Kretzmann

The chief executive of Highbury Media joined the board of a company with links to the developers of the controversial River Club project in Cape Town soon after an editorial criticising the development was removed from a Highbury publication and replaced by a series of articles favourable to the project.

The removal of the critical editorial and publication of three new pieces on Cape{town}etc occurred just before work on the R4.5 billion development started, on 26 June this year. On 1 July, Highbury Media CEO Kevin Ferguson took up a directorship in Daddy’s Deals, a company set up by River Club owner and developer Jody Aufrichtig and his brother, Daniel.

The R4.5 billion development at the confluence of the Liesbeek and Black rivers has attracted opposition from civic associations, including the Observatory Civic Association and Goringhaicona Khoi Khoin Indigenous Traditional Council. They believe the development is inappropriate on land seen by many as the first site of colonial dispossession by the Dutch, where the Khoi were forced from their ancestral grazing lands. However, the First Nations Collective supports the development. The 150,000 square metre development, which is to house Amazon’s new Africa headquarters, has received backing from the City of Cape Town and the provincial government.

The property’s owners, Liesbeek Leisure Properties Trust, bought the 14.5 hectares of land from Transnet in 2015 for R12 million.

The Western Cape Department of Environmental Affairs and Development Planning granted the trust environmental authorisation to proceed on 20 August last year. Former mayor Dan Plato dismissed appeals — including one from the City of Cape Town’s environmental management directorate — against the City’s Municipal Planning Tribunal decision to grant the trust rezoning rights, and on 19 April gave the developers the go-ahead.

On 9 June, an editorial criticising the development was published on Cape{town}etc, owned by Highbury Media. In the editorial, titled “Rifles vs. Knobkerries – Amazon to build on Khoi and San land”, editor Robyn Simpson wrote that the development was “a tangible metaphor for the cancer that is globalisation consuming everything linked to that which is distinctly and historically African”.

“I am disgusted by the blatant disregard,” wrote Simpson.

Within 24 hours, the editorial had been removed from the Cape{town}etc site, with no explanation or note to readers. Over the next two weeks, three articles praising the River Club development suddenly appeared on the news site.

On 16 June, an article ‘R4bn River Club development removing the cycle of Khoi and San invisibility’ was published. In the article, Jody Aufrichtig, director of the trust and “the man behind the River Club development in Observatory”, stated that he was “sick of all the lies” from those opposing the development. He claimed the development would be “a cultural and historical hub” celebrating Khoi and San culture. This was based on a deal struck with a new group set up as the First Nations Collective headed by Zenzile Khoisan. In terms of the deal, Khoi and San symbols and street names would be included in the precinct, there would be an indigenous garden, and a First Nations media centre and an amphitheatre.

On 18 June, an article responding to environmental concerns over the development —- as expressed in an op-ed in Daily Maverick — was published, followed by an article on 24 June about the trust’s deal with the First Nations Collective.

Neither of these articles carried a byline.

Soon after the publication of these articles, and four days after work on the River Club site started, Highbury Media CEO Kevin Ferguson was officially listed as a director of Daddy’s Deals, an online shopping company set up by Jody Aufrichtig and his brother Daniel Aufrichtig in 2011. According to the Companies and Intellectual Property Commission (CIPC), Ferguson became a director on 1 July.

A link to the Daddy’s Deals site has been housed on Cape{town}etc since July. One of Ferguson’s fellow Daddy’s Deals directors, Gavin Basserabie, is also directly connected to business interests with Jody Aufrichtig. Basserabie and Aufrichtig are both directors of a Canadian company which develops pharmaceutical products.

Ferguson did not respond to detailed questions sent to his personal assistant Kovi Naidoo. Nor did Cape{town}etc editor Robyn Simpson.

Naidoo told GroundUp on the telephone that there was no family relationship between trust director Nicholas Ferguson and Kevin Ferguson, and that the timing of the Highbury Media CEO’s appointment as Daddy’s Deals director was “a coincidence”.

Emailed questions included whether there was a financial exchange for Ferguson’s directorship of Daddy’s Deals, and what measures were in place to ensure editorial independence within Highbury Media publications from Ferguson’s business interests.