“I have never seen something like this in my life. People drinking dirty water like animals” says resident 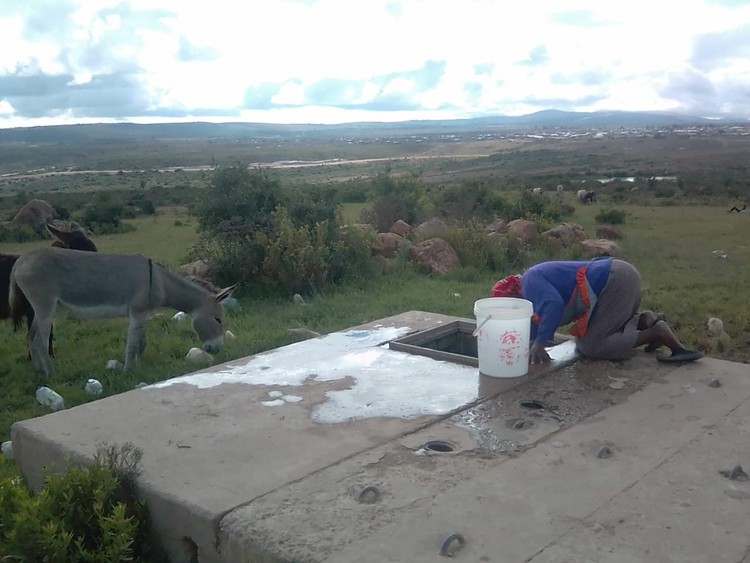 A woman from Enkanini in Makhanda collects water from an old water air valve chamber. Residents say they have no choice but the use the murky water because the area has been without running water since last Thursday. Photo: Loyiso Dyongman

Sebenzile Fatman of Enkanini in Makhanda is among hundreds of residents who say they have no choice but to drink water they collect daily from an old water air valve chamber.

“This water is dirty and you can even see how filthy it is around this structure … These water outages have been going on for a long time but this is the worst one ever,” he said.

Earlier this week, residents closed Albany Road with burning tyres because they had been without water since Thursday last week. Makana Municipality said the problem was caused by a blown gasket at the James Kleynhans Water Pump Station.

Gift of the Givers started delivering water to the affected areas but Enkanini residents complained that the Jojo tanks situated around the settlement ran dry soon after being replenished.

Fatman said that during previous water outages in the town, residents would only use the water from the chamber for laundry. But now, he said, they were forced to drink it. They boil the water first.

The chamber is situated about 500 metres from the houses on an open field in Mayfield. The top of the chamber is always opened and the water inside is murky, filled with bottles and debris.

We also met Nomfusi Apleni, 63, who was filling a bucket of water from the chamber. He said, “I have never seen something like this in my life. People drinking dirty water like animals. We don’t even know if the water has human waste in it because this is not closed and kids play here.”

Another resident, Siziwe Madlavu, said, “Each time when there is a water outage, we come here. We would use the water for laundry and other things but not for cooking and drinking. Now the outage has taken too long and we are forced to drink the water.”

Ali Sablay of Gift of the Givers confirmed that they do refill the water tanks but often rely on the municipality to let them know when to replenish the tanks.

When asked if they were aware that people were resorting to drink from the chamber, Gubevu Maduna, Makana Municipality Water and Sanitation manager, said, “It should be clear that this is not wastewater but fresh water from the reservoirs.”

In a statement on Wednesday, the municipality promised that water will be restored fully by Sunday. The municipality said that residents stockpiling water had also contributed to the emptying of all the reservoirs.

“On Friday, we will be able to release water again,” it said.

Next:  NGOs warn latest budget will have bad outcomes for education