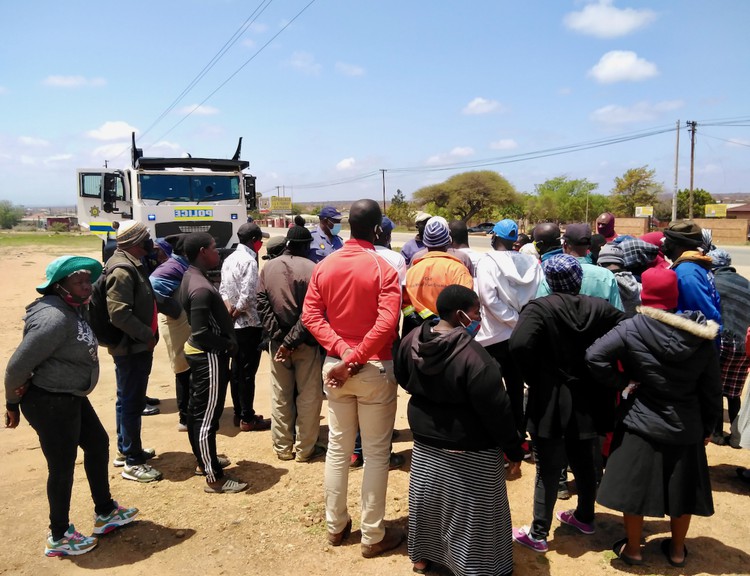 About 50 people, some of whom had walked from villages seven kilometres away, marched on Wednesday from the business centre to the police station in Botlokwa, Molemole, Limpopo. Photo: Bernard Chiguvare

About 50 people, some of whom had walked from villages seven kilometres away, marched on Wednesday from the business centre to the police station in Botlokwa, Molemole, Limpopo, to hand over a memorandum demanding more police. As they marched they sang and blew whistles. Police accompanied them on the last half of the march.

Community leader Edwin Molebohe said only two police vehicles patrol at night, which is when criminals are most active. They want more police vehicles and also want the police to behave professionally. Molebohe said when people go to Botlokwa, Dendron and Soekmekaar police stations to open cases, instead of being helped they are harassed by police officials.

Botlokwa police station commander, Peter Nemaitoni, said, “I cannot tell you how many vehicles we have at this station and how many go out at night. All I can tell you is that we are offering services to our community well.”

He signed the memorandum and promised to respond within 14 days.

The community had planned a number of marches on a variety of issues but they had not received permission to hold them. They had not got advice on how to apply formally.

Molemole Municipality is divided into 16 wards and its offices are not central, something the marchers want changed.

Water is a major concern. According to Molebohe, water is delivered by truck once a week and each resident gets 420 litres.

“The amount of water delivered is very little and we end up buying from those who have boreholes. A 210-litre container of water costs R70. This is very expensive as most community members are not employed,” he said.

They also intend to march to the hospital to demand it improves its ambulance service. Molebohe said people wait two hours for an ambulance to come.

Unemployment is high in the rural Molemole Local Municipality located in the Capricorn District, and the group want 90% of jobs to go to local people in the grocery and hardware shops in the Botlokwa business centre.

Next:  A Cape Town mom couldn’t find a school for her autistic son. So she started one