Hundreds picket on Wednesday over mass retrenchments, wage freezes and budget cuts among other things 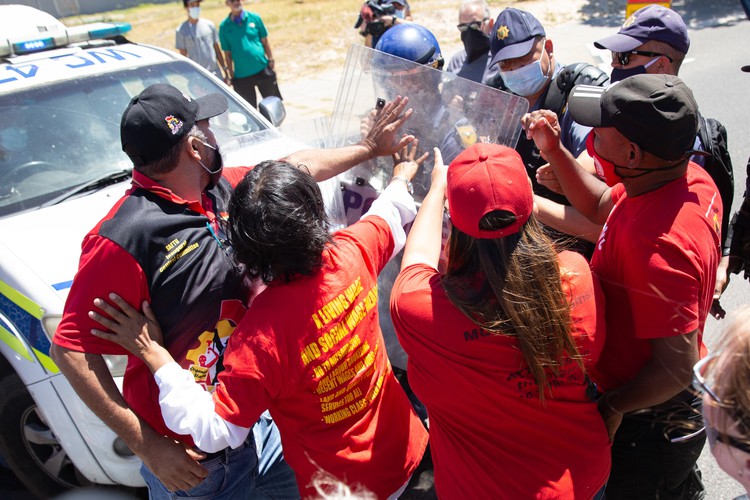 Members of the South African Federation of Trade Unions (SAFTU) clash with police who were trying to prevent them from marching to Parliament in Cape Town ahead of Finance Minister Tito Mboweni’s Budget speech on Wednesday. Photo: Asharf Hendricks

At least two people including Western Cape secretary of the South African Federation of Trade Unions (SAFTU) were arrested during a standoff between police and protesters in Cape Town CBD on Wednesday.

The protest was part of demonstrations organised by the union and supported by other affiliate groups across the country. GroundUp attended demonstrations in Cape Town, Johannesburg and Gqeberha (Port Elizabeth). The aim of the protests is to show workers’ frustration over the impact of the pandemic through mass retrenchments, wage freezes and brutal austerity measures.

In Cape Town, police tried to stop the group of about 40 people from marching to Parliament, where Finance Minister Tito Mboweni delivered the budget speech. The group was instructed to disperse because gathering for a protest is not allowed under lockdown level 3.

Chairperson of SAFTU Nyaniso Siyana told protesters that they would instead head to Parliament by motorcade. “Why is this gatherings Act in South Africa very selective and not applied in Joburg where Ace Magashule, and military veterans are having the same gathering? So we must die in the township and not go to Parliament to give our memorandum?” said Siyana.

SAFTU members then got into their cars and headed to the Parliament while a few were seen walking. SAPS and Metro Police blocked access near Darling and Keizersgracht streets and stopped a SAFTU branded car. This led to a confrontation and the arrests of SAFTU provincial secretary Andre Adams and a female union member.

Police spokesperson Colonel Andrè Traut confirmed that two people were arrested for an offence in terms of the Disaster Management Act. “Once charged, they are expected to make a court appearance in Cape Town.”

In Johannesburg, about 150 people picketed outside the Commission for Conciliation, Mediation and Arbitration (CCMA) against recent budget cuts at the establishment. They say the budget cuts affect the turnaround time of cases at the CCMA. 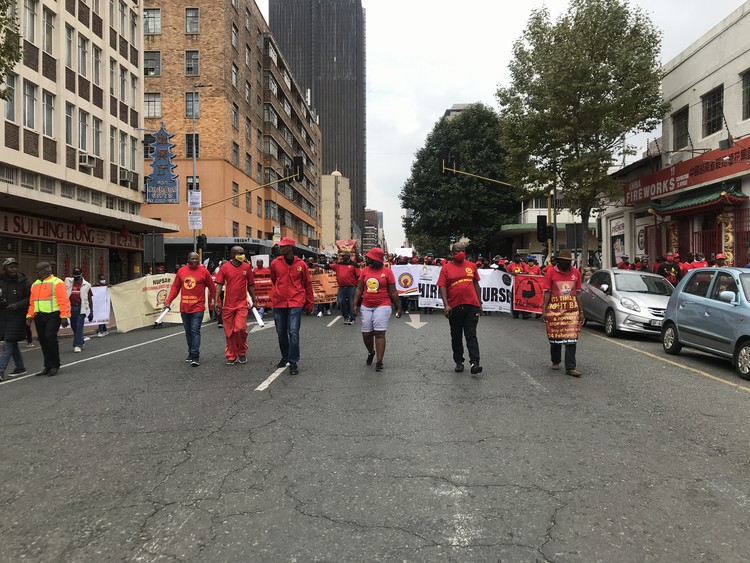 Motebang Oupa Ralake, National Union of Metalworkers of South Africa (NUMSA) regional secretary and the Gauteng convenor of SAFTU said that workers were being dismissed every day and are being referred to the CCMA. Now cases take longer than six months to be resolved compared to its previous 30-day waiting period, she said.

“This does not benefit the poor, dismissed worker. It is benefitting the arrogant employer that dismissed the worker,” he said.

Before arriving at the CCMA, members of SAFTU and affiliated unions picketed outside Chris Hani Baragwanath hospital in Soweto, in solidarity with health care professionals.

Protestors marched from the CCMA to the Johannesburg Central Police Station to support the South African Police Union (SAPU) members as they handed over a memorandum to the police station’s management.

“There is a lack of PPE and each time we try to talk to management about this, they change their statements. We want management to take our lives seriously,” said Dorothy Sithole, chairperson of SAPU in Johannesburg. In addition to a request for PPE, SAPU demanded that more be done to address police killings.

SAFTU’s Lebogang Bongani Phanyeko said their grievances needed urgent answers from President Cyril Ramaphosa and not Nqaba Bhanga, Mayor of Nelson Mandela Bay. “The mayor is just a small fish and his job is to deal with potholes,” he said.

He said that the government not increasing salaries over the next four years would undermine the bargaining council. He said they also demanded free water and education, no eviction of farm workers or anyone else, and for the government to give everyone the Covid-19 vaccine.

Their memorandum was accepted by petitions manager Thembekile Mgwanza. 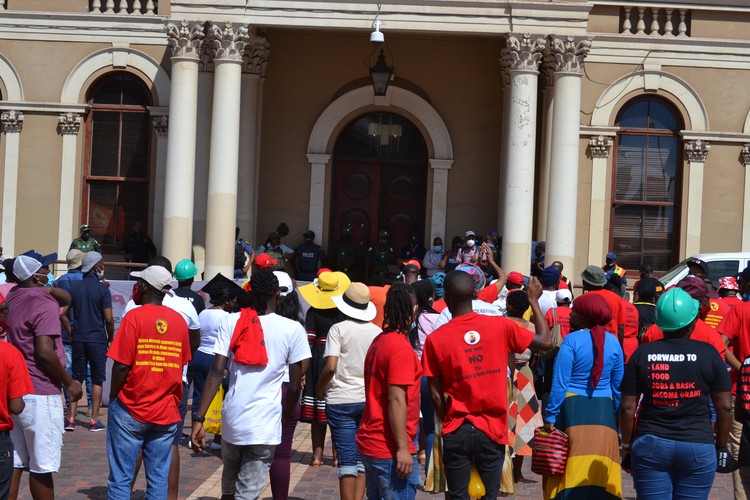 Correction: The previous version of this article incorrectly named the National Union of Metalworkers of South Africa as mineworkers.

Next:  Ladismith cheese workers demonstrate in solidarity with farm workers